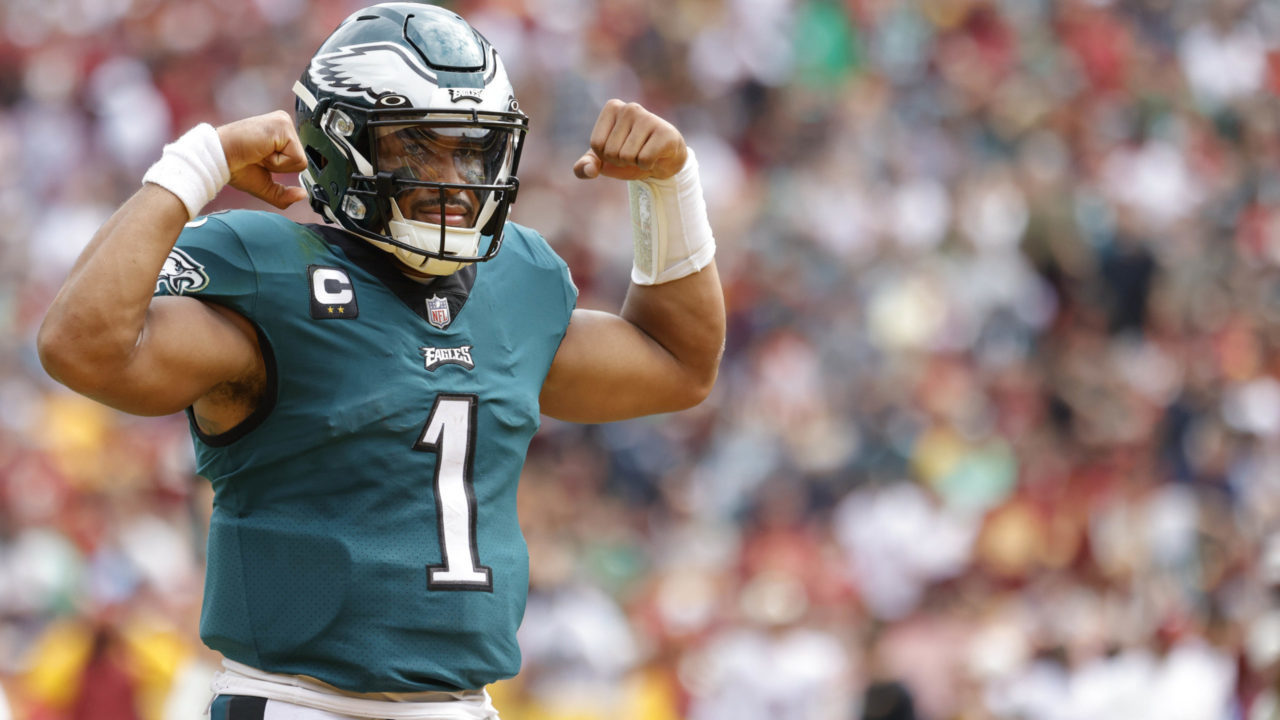 The Eagles Offense vs. Cowboys Defense

Philadelphia’s offensive line has not yet faced an elite pass rush, but they’ve held up against good ones in Jacksonville, Minnesota, and Washington. So I’m treating this trench matchup as a relative draw between two high-end units. I’m curious to see what Dallas’ front looks like against a high-end offensive line.

The Cowboys Offense vs. Eagles Defense

The Cowboys’ offensive line was a liability on opening day against Tampa. Their turnaround has been remarkable since then, and it’s a big reason Cooper Rush’s offense has gone 4-0. The Eagles have a top-five defensive front with one of the very best interiors in the league. This is a strength vs. strength matchup with the Cowboys’ top-ten caliber offensive line squaring off with the Eagles’ top-five front.

This is What You’re Betting On in Eagles vs. Cowboys

Last year was Nick Sirianni’s first as head coach of the Eagles, and it was Jalen Hurts first as opening-day day starter. I’m completely throwing out Dallas’s Week 18, 51-26 victory over the Eagles because Philadelphia didn’t play their starters in that contest. I’m not really putting a ton of stock in Dallas’s Week 3, 41-21 Monday night win against the Eagles, either. That was Hurts’ third game as the Eagles’ official starter and Sirianni’s third as head coach. That game also came before Sirianni’s extremely self-aware offensive adjustments that came two weeks later after their loss to the Chiefs. Additionally, the Eagles have a much better roster now than they had last year. Dallas is playing very well right now, but their roster is still down significant talent from last year’s.

A bet on the Eagles is a bet on the best non-quarterback roster in the league. Philadelphia has a top-ten secondary, a top-ten front, a top-ten collection of pass catchers, and a top-five offensive line, and Miles Sanders is currently fourth in the league in yards rushing. Jalen Hurts is currently playing at an MVP-caliber level. If that continues, the Eagles have the best roster in the league, period. I was high on the Eagles coming into the season, so I don’t see their 5-0 record as a fluke, and it wouldn’t surprise me in the slightest if they ended up being the top seed in the NFC, considering their schedule. The Eagles have been consistent through the first five games on both sides of the ball, but I don’t think they’ve played a ceiling game yet. Sunday Night Football against rival Dallas is more of a pressure spot than Monday Night Football against the Vikings was back in Week 2. Your biggest concern with an Eagles bet is that Philadelphia presses and plays inconsistent football for the first time this year.

A bet on Dallas in its current form is a bet on the Cowboys’ defense continuing to win games. Cooper Rush has been great in relief duty, and so has the Cowboys’ offensive line and coaching staff. But Dallas has not breached 25 points this season, and Rush has topped out at 235 yards passing in a game so far. Rush threw for 102 yards passing in the Cowboys’ upset win over the Rams last week. Rush has played excellent, turnover-free football, and he orchestrated a game-winning drive against the Bengals, but let’s not treat Rush as someone that’s going out and shredding defenses. He’s been an efficient game manager that’s thrown four touchdown passes with a 61% completion percentage over four-and-a-half games. The clearest path to a Cowboys win or cover is that Jalen Hurts plays his most inconsistent game of the year against the Cowboys’ high-performing defense, while Rush continues to be rock solid in relief duty.

Unless Hurts flops in this contest, this seems like the game that the Cowboys will miss Dak Prescott.

Winner/ Confidence Pool: I’m taking the Eagles in winner pools, and I’ll be higher than the consensus on them in confidence pools.

Spread Pool: I will take the Eagles in one of my ATS tournament entries at a value.

Survivor Pool: If you can take the Rams or Buccaneers this week, that’s probably the direction I’d go in survivor pools. That said, I don’t think the Eagles are a cross-off in that format.