NFL Draft: What Will the Falcons Do At No. 4? It’s all but guaranteed that the first three players taken in his year’s NFL draft will be quarterbacks. There may be a surprise in terms of exactly which ones, but the real intrigue on April 29 begins when the Atlanta Falcons are on the clock with the fourth overall pick. Will they make draft history and make it four QBs in the first four picks? Will they trade down?

In order to form some sort of speculation into what the Falcons might do, it requires a quick glance into some of their recent moves with some of their biggest names. The state of the franchise right now begins and ends with Matt Ryan, who will be 36 before the start of the 2021 season. Since signing his first $30 million-plus annual contract in the NFL, Atlanta has restructured Ryan’s deal four times — including three times since the end of the 2019 season. After pushing forward close to $15 million in the 2020 offseason, cap troubles forced Atlanta to push forward an additional $14 million through the 2023 season. The conversions would account for over $65 million in dead cap right now and over $40 million if Ryan were released prior to 2022.

Atlanta’s other offensive star, Julio Jones, is also slightly hand-tying the Falcons. With two years remaining on his contract in 2019, Atlanta extended Jones, making him the highest-paid receiver in the NFL at $22 million annually. Since then, the receiver market has cooled, and outside of DeAndre Hopkins, the top guys have had trouble topping the $20 million threshold. Jones’ extension leaves Atlanta with a current dead cap of over $40 million and $17.5 million if released after this season.

Struggles on the offensive and defensive lines

Although Atlanta has invested significant capital in the offensive line, including two first-rounders in 2019 (Chris Lindstrom and Kaleb McGary) and a third-rounder in 2020 (Matt Hennessy), they have consistently struggled to keep Ryan upright. Since 2017, Ryan has been sacked 155 times, the third most of any quarterback. He has also been sacked 89 times in the past two seasons, which also only trails Russell Wilson and Deshaun Watson.

On defense, Atlanta has not been able to find a dominant pass rusher outside of Vic Beasley’s 15.5 sacks in 2016. Ignoring that, the Falcons have not had a 10-plus sack guy since John Abraham in 2012. Again, it appears Atlanta is trying to address that problem but has not found a suitable answer. Beasley was unable to follow his big season with any consistency, and former first-round pick Takk McKinley only lasted four seasons with the Falcons. Atlanta has had similar luck in free agency. Dante Fowler was brought in on a big deal after a breakout season with the Rams and has not lived up to the $15 million annually that Atlanta originally agreed to before re-doing his contract this offseason.

With that in mind, we have identified three primary options Atlanta can consider with the fourth pick.

If Atlanta is set with Ryan for at least the next two seasons at quarterback, which could be indicated by the most recent restructure, trading back could be the best option for the Falcons with the influx of quarterbacks at the top of this year’s draft. There are two primary trades over the past few seasons that could be an indicator for what Atlanta could get. In 2018, the Jets traded up from No. 6 to No. 3 to take Sam Darnold. For their troubles to move back three spots, Indianapolis was awarded three additional second-round picks. The most recent comparable trade is what San Francisco just gave up to move up to No. 3 – the 12th overall pick, additional first-round picks in 2022 and 2023; and a 2022 third-round pick.

Based on those two trades, a reasonable offer for Atlanta could include a team’s first this year and next with an additional second thrown in. It appears Denver (at No. 9) and New England (at No. 15) might be in the best position to offer a package to move up. The rest of the teams that could be targeting a quarterback — Las Vegas (No. 17) Washington (No. 19), Chicago (No. 20) — all have picks in the back half of the first round.

Due to the extraordinary write-off for Ryan, he is certain to be on the roster for the 2021 season. The real question for the Falcons is what to do in 2022, with Ryan either incurring a $48.7 million cap charge or costing the Falcons $40.5 million in dead cap. If they were to draft a quarterback and move on from Ryan next offseason, they would be facing a similar predicament that the Eagles, Rams and Lions are all dealing with, in regards to having a quarterback no longer on the roster that is taking up substantial cap space: As pictured above, the Falcons situation is most similar to Philadelphia, which incurred a $33.8 million dead cap hit to trade Wentz, while having Jalen Hurts under contract for less than $2 million annually. The Falcons would be facing a slightly more precarious situation because Ryan accounts for more dead cap and selecting a top quarterback will cost around $8 million, as opposed to Hurts’ second-round cost of $1.5 million.

Any quarterback they might take is almost certain to sit a year and then would be entering a situation where the Falcons are accounting for over $40 million in dead cap for one player. Of the 11 teams that have $40 million+ in dead cap total since 2016, they are averaging 3.9 wins. Again, Atlanta would reach that $40 million mark with just one player. Not an advantageous indicator for a young quarterback to be coming into. All of a sudden, you are looking at year three for the quarterback and wasting the opportunity presented by the rookie wage scale.

While Atlanta has struggled to maintain consistency on the offensive and defensive lines, they certainly have not been void of talent at receiver, moving from Roddy White to Julio Jones to Calvin Ridley. While adding another pass catcher to the mix may not be wise, it is also not certain to be a successful pick. Since 2015, there have been nine receivers taken inside the top 15 (Kevin White, Amari Cooper, DeVante Parker, Corey Coleman, Corey Davis, Mike Williams, John Ross, Henry Ruggs and Jerry Jeudy). Certainly no guarantees for a lot of “can’t-miss” prospects.

The Falcons are also due to have Jones on the books for over $19 million in both 2022 and 2023. They are also almost certain to pay Calvin Ridley $11 million on his fifth-year option for 2022. Currently, the only other teams paying even two receivers $10 million-plus are Cleveland, the Los Angeles Rams, Tampa Bay and the New York Giants. Bringing in another pass catcher would cost around $8 million, which would be significantly more money than any other team is paying a receiving corps.

As just described, the Falcons should take receiver/tight end off the board. Despite the historic write-off for Ryan in 2022, quarterback cannot be ruled out if they have a conviction about who is there for them at No. 4. Atlanta is going to have to address the future at quarterback very soon, and this year might be their best opportunity to fill that hole. The trade-back option is interesting but would almost certainly require an additional first, and Atlanta should be aware to not push themselves too far down in the first round this year 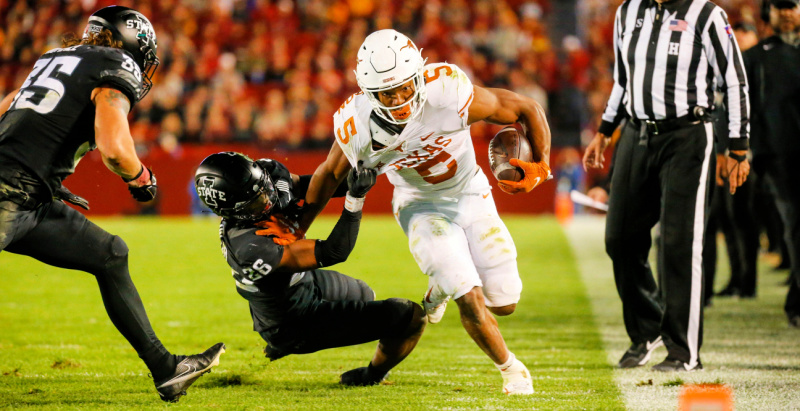