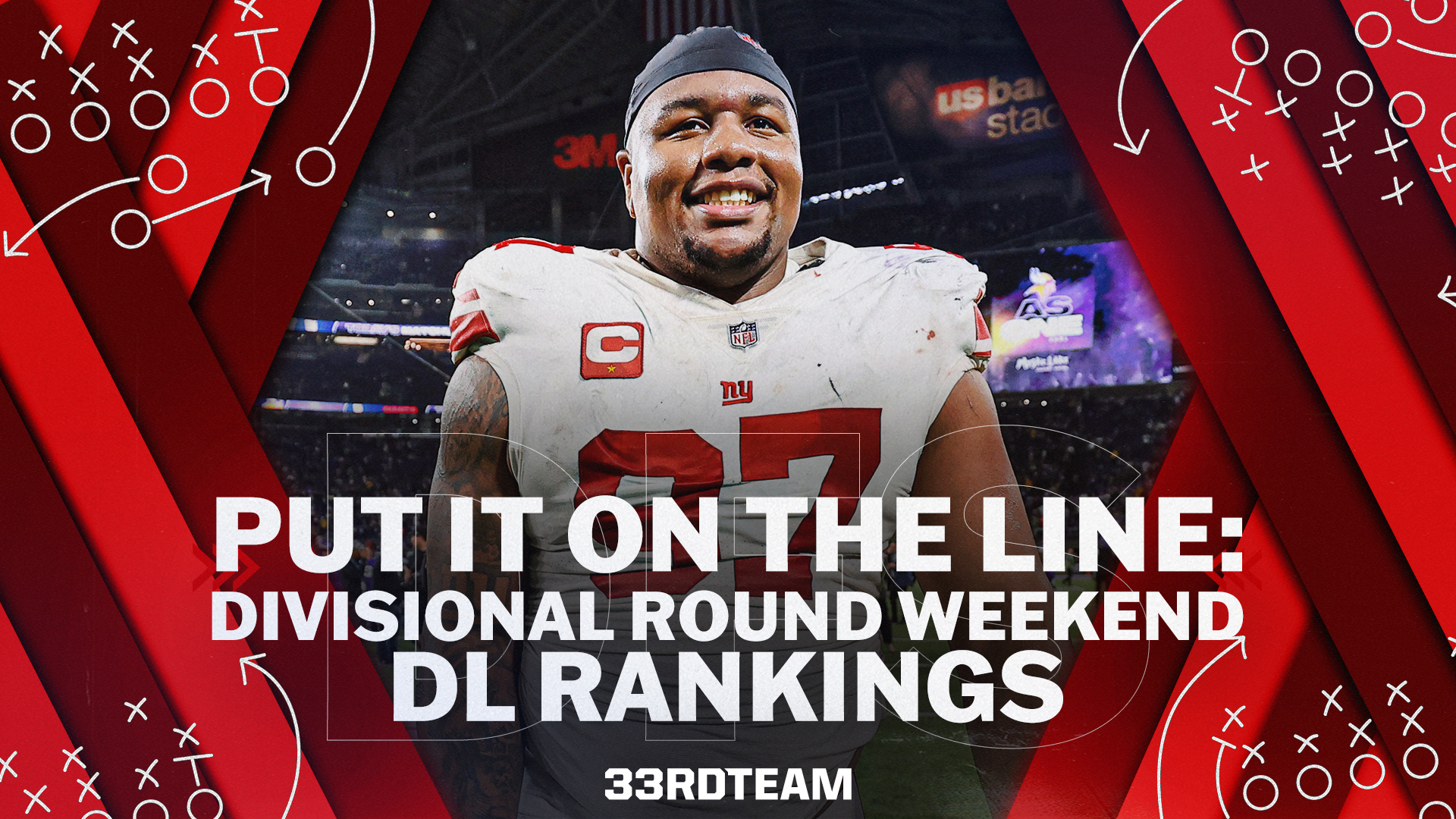 To rank the playoff teams’ defensive line play, I watched games with an emphasis on recent games against quality opponents (other playoff teams). Minor adjustments were then made based on SIS data. All rankings assume players who are questionable will play.

Some teams only moved up because other teams were eliminated. That’s why I’ve provided detailed thoughts on what we learned from this past weekend, so there’s no doubt where I stand on the quality of these offensive lines.

What We Thought: The 49ers’ have a defensive front that will cause opposing offenses problems rushing or passing. The group is headlined by one of the favorites to win NFL DPOY this year, Bosa.

What We Learned: That’s the 49ers team that we saw the week before. The Seahawks tried to neutralize them by getting extra blockers in various ways, running out seven offensive linemen, bringing in three tight ends, or running the Wildcat.

San Francisco responded by matching these personnel groupings at the second level of the defense, trusting their defensive linemen to disrupt Seattle up front and either a) make the play themselves, or b) free up those linebackers to make them. That trust was rewarded as they were successful the majority of the time. In the passing game, even though Geno Smith made some plays early, they never let him get comfortable and forced him to make tough throws. They remain in the top spot.

What We Thought: The Cowboys play strong against the run but also are particularly effective at pressuring quarterbacks.

What We Learned: Tom Brady has built a legacy out of manipulating the pocket and getting the ball out quickly to help himself stay upright. Dallas didn’t care as Brady never quite looked comfortable out there until it was far too late. The Cowboys confirmed what they’d previously put on video. They maintain the second spot.

What We Thought: The Eagles have a deep group, allowing them to frequently substitute and keep players fresh. However, the unit can run hot and cold sometimes at the interior positions.

What We Learned: Philadelphia was on a bye and got another week healthier. There is no change in its ranking.

What We Thought: The Giants have a strong interior with players who complement each other well but trot out lesser-known players at the edge positions.

What We Learned: What can I say? For my money, Lawrence was the best defensive player last weekend besides Asante Samuel Jr. Lawrence was a closer for New York in the mold of former New Yankees closer Mariano Rivera.

Lawrence got pressure on what felt like every play Kirk Cousins dropped back to pass toward the end of the game. It wasn’t just him though. Williams had a strong game, and the edges brought a bit more than what we saw in the regular season. This feels like a unit peaking at the right time, so they’ve moved up this week.

What We Thought: The Jaguars are a fast, physical group that frequently penetrates the opponent’s backfield but aren’t always as technically sound as you’d like, leading to inconsistency.

What We Learned: The inconsistency we talked about last week showed up as one might expect given the tale of two halves vs. the Chargers. That said, you still can see the same energy we talked about that has me so high on this group.

I would have liked to see them start out a bit faster. Feeding off the energy of a home playoff crowd but not quitting down four scores in the first half speaks to a grit and resilience this unit has. I still like what they’re building on this front in Duval, but they drop a spot in this week’s rankings.

What We Thought: The Bills are tough at the point of attack and will leave opponents bruised the next day despite having no single standout player since Von Miller’s injury.

What We Learned: Buffalo confirmed what we saw previously, holding the Dolphins to just more than two yards a carry. The Dolphins did use the quick game as a way to neutralize the pass rush as predicted last week, and they moved the pocket. This was another outing that Buffalo’s identity. Yet, this week sees them slide in these rankings through no fault of their own.

What We Thought: The Chiefs are built to beat people when they have a lead. They have one of the league’s premier interior pass rushers and the rest of their unit thrives rushing the passer.

What We Learned: Kansas City was on a bye and was able to get healthier as necessary.

What We Thought: The Bengals are strong against the run but depend on a single player (Hendrickson) more than they should be for their pass rush.

What We Learned: Cincinnati confirmed what we knew. They set a solid edge, but they didn’t get much when Tyler Huntley dropped back to pass unless coverage held out longer than normal. It was a tough matchup for the Bengals’ front. They should fair better the rest of the way against the Bills this week and then, potentially, the Chiefs or Jaguars next week.

After getting bullied by Tampa Bay in the Super Bowl two years ago, Kansas City went back to the drawing board and has drawn up a competitive offensive line group, using large amounts of cash and draft capital. Since both teams can apply the pressure when leading, this offensive line improvement is key in giving the Chiefs the edge.

Something to watch for: Look for the Jaguars to use the screen pass to slow down Kansas City’s pass rush and in particular Jones. He has the ability to wreck the Jaguars’ game plan, but effective screens can cause a little hesitation for defensive linemen like Jones, which could give Jacksonville an edge at a crucial point in the game.

The Eagles find themselves in the top three of both my offensive line and defensive line rankings, so it shouldn’t come as a surprise I have them with the advantage. The Giants’ defensive line does seem to be firing on all cylinders right now, but the Eagles have what they need to douse that fire in this NFC East battle.

Something to watch for: Look for the Eagles to control and attack the Giants’ edges in the run game. It’s where they have the biggest advantage, and it’s one I expect them to try to exploit early and often.

I’d probably favor the Bills in this matchup anyway, but with the Bengals hurting for bodies on the offensive front this one is a clear decision for the Bills. Cincinnati will be without both Jonah Williams and Cappa this week, forcing them to start two backups.

Something to watch for: The Bengals will try to cover up any deficiencies on the offensive front by moving the pocket. While Burrow isn’t known as the most mobile guy, he’s more than capable of extending plays with his legs to buy a little bit more time to find his weapons downfield.

The edge in this matchup is razor-thin and could almost be called a coin toss as both teams have top-tier units on either side of the trenches. That said, I give a slight edge to the 49ers. The Cowboys’ offensive interior played well against Tampa Bay, but they can’t count on consistently winning on the perimeter against the 49ers due to their superior edge defenders.

Something to watch for: Two heavyweights throwing haymakers at each other for 60 minutes. Parsons and Trent Williams are two of the best at their respective positions in the NFL. This will be a fun one for any neutral observer that can appreciate the big fellas.

If you’re looking for something beyond casual enjoyment, look for Parsons and Bosa to travel around the defensive formation in third and medium to long situations. The defense can dictate matchups, and rather than stalemating against the opposing team’s stud offensive tackle, they’ll look to get them in favorable situations, whether by original alignment or by a stunt.