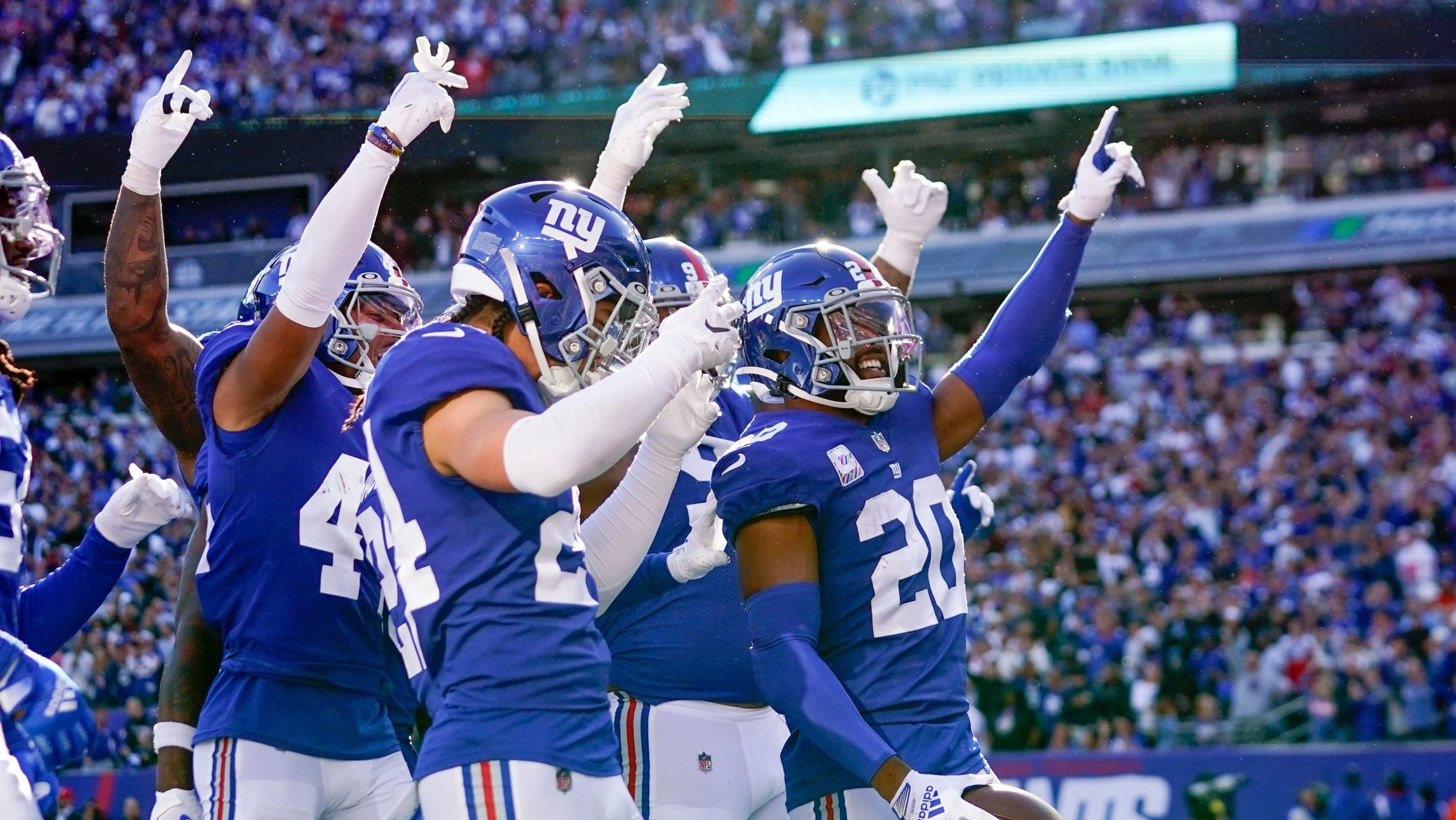 Six games into the season, it’s time to take a closer look at the most surprising team in the NFL: The New York Giants. After beating Baltimore in a slugfest last Sunday, they are 5-1 and so far exceeding many pundits’ expectations.

In this “scouting report,” we’ll examine Big Blue’s overall strengths and weaknesses and how they may play out as the season continues. Injuries, of course, are the great unknown, but positional depth can help mitigate that.

The Giants are under new management, with Joe Schoen as the general manager and Brian Daboll as the head coach. The coordinators are Wink Martindale on defense and Mike Kafka on offense.

Somewhere in New Jersey, Dave Gettleman is smiling. The much-maligned fingerprints of the Giants’ former GM are all over this team. Daniel Jones, Saquon Barkley, Kadarius Toney, Leonard Williams, Dexter Lawrence, Azeez Ojulari, Tae Crowder, Oshane Ximines, Julian Love, Xavier McKinney, and Graham Gano all became Giants on Gettleman’s watch. All except Toney, who is injured, have contributed to the Giants’ resurgence.

Of course, and most importantly, Coach Daboll, his coordinators, and GM Schoen have made an enormous difference. The point is the cupboard wasn’t as bare as some experts and many fans had believed.

Barkley is back from a severe knee injury, from which he needed two years to recover fully. He is a unique combination of speed, acceleration, power, explosiveness, and spectacular ability to avoid contact. He has run for 80 yards or more in each game this season. The Giants are averaging 5 yards per rush attempt, and Saquon produces breathtaking highlight plays each week.

He is a good route-runner and catches the ball well. His dynamic speed and acceleration can turn a 5-yard swing pass into a 30-yard gain, as he did last Sunday. He is a good and willing blocker on blitz pickups, and best of all, he is a “gamer.” With the contest against the Ravens on the line in the fourth quarter, Barkley sustained what looked like a shoulder stinger, causing him to leave the game in obvious pain. Rather than sit on the bench for treatment, he walked and shook it off.

Following a TV timeout, the announcers were surprised that he had returned to the game. Sure enough, he rocketed into the air high above the scrum on the goal line, scoring a touchdown that gave the Giants a late lead. The ability to rely upon Barkley for game-changing plays on a weekly basis has made the Giants’ offense capable of competing with and winning against anyone. He has also made Daniel Jones much more stable and successful. Because of injury, the Giants do not have a go-to wide receiver. In every phase of the offense, Saquon is the “go-to guy,” and he delivers every time he steps on the field. Barkley is second in the league in rushing with 616 yards rushing.

The second reason the Giants are 5-1 is Daniel Jones. He has thrown 159 passes (20th in the NFL) but has completed 107 for a percentage of 67.3, which is second in the league among quarterbacks who have started every game. His average of 6.4 yards per attempt is a direct result of the lack of receivers. He also suffers behind an inconsistent offensive line, which is far less than ideal in pass protection. That is validated by the 19 sacks he has taken. Jones is not holding the ball too long. All too often, the rush overwhelms him. That said, with literally no front-line receivers, he has thrown only two interceptions. Jones is tied with Jalen Hurts and Geno Smith for the fewest interceptions among starters in this all-important category.

Jones is very athletic and fast. He can extend plays when the pocket breaks down, as it often does, and attack defenses with designed runs and bootlegs. In Buffalo, Brian Daboll took Josh Allen, a similar talent, from the rawest of rookies to the top of the NFL. Jones was in a worse predicament than Allen in his previous three years with New York. He was often injured by the sacks taken, maligned by fans and media alike, and the club did not pick up his fifth-year option.

Giant fans are asking, “Who’s the guy wearing Daniel’s No. 8?” Let’s start with physical and mental toughness. He takes hits and gets back up punching. Coach Daboll has helped him with a creative scheme. Jones is blessed with a superior arm and can make every throw. But his accuracy, field vision, and poise in the pocket have all improved markedly under Daboll and the offensive staff. His toughness, courage, competitiveness, and enthusiasm ignite his team. Barkley provides big-play capability with every touch and is a major weapon in the red zone.

Rookie tight end Daniel Bellinger has emerged as a reliable receiver, but until the injured veterans get back, it’s really a patchwork receiving corps. The passing game should improve as the health situation improves, but it will take time. In addition, if the Giants are to remain a legitimate contender, the O-line must improve. Barkley makes that group look better than it is in the run game, but you simply can’t win nor keep your quarterback healthy, averaging more than three sacks per game.

The kicking game is in good shape. Graham Gano has a big leg and lots of fortitude, both of which are absolute necessities when winter comes to the Meadowlands. Punter Jamie Gillan has similar qualities. Punt returner Richie James and kickoff returner Gary Brightwell are sure-handed and have first-step acceleration, a must for quality return men.

That leads us to perhaps the most improved unit in the NFL, the Big Blue defense. Defense is in the Giants’ DNA. The chant “Defense! Defense!” began in the original Yankee Stadium during the 1956 season when an outstanding unit led the Giants to the league championship. Those of us, like myself, who grew up in the Big Apple in those days idolized Hall of Fame linebacker Sam Huff and Hall of Fame defensive lineman Andy Robustelli as much as offensive stars such as Frank Gifford. Later on, Bill Parcells and his defensive coordinator, a guy named Bill Belichick, created the Big Blue defense, led by Lawrence Taylor, that dominated the NFL. I had the dubious distinction of seeing those teams up close and personnel, including in Super Bowl XXV.

Since 2011, the defensive identity has waned. Enter Don “Wink” Martindale, who spent the previous 10 seasons in Baltimore. Martindale runs a complex defense featuring many stunts and exotic blitzes in the front seven. In addition, he relies heavily on outstanding coverage in the back end. I can tell you from personal experience that his schemes are very hard to prepare for and play against.

The Giants’ defense already had plenty of talent. Coach Martindale took the existing pieces, along with No. 1 draft choice Kayvon Thibodeaux, and molded them into a solid unit. Nose tackle Dexter Lawrence is playing like an All-Pro, and there is quality depth on the defensive line. Jaylon Smith and Tae Crowder are solid run-and-hit linebackers. The defensive backs who most considered journeymen – Adoree’ Jackson, Julian Love, and injury fill-in Fabian Moreau – have played well. This is a unit that, as the saying goes, will put knots on your head every week.

Coach Daboll has instilled a high-energy, positive approach and thus far worked his magic with Daniel Jones as he did in Buffalo with Josh Allen. A rejuvenated Saquon Barkley is a game-changer. On defense, Coach Martindale has taken a group that underachieved last season and made them a force with which to be reckoned. Just ask Lamar Jackson and the Ravens.

Can this continue all the way to the playoffs in a loaded NFC East? On defense and in the kicking game, yes. On offense, it is doubtful unless the line improves in all phases. Neither Jones nor Barkley can continue to take the hits they absorb at the current rate.

Are the Giants for real? As Bill Parcells famously said, “You are what your record says you are.” We’ll see come January.