The NFL season is a war of attrition. Every team must prioritize depth in order to withstand the magnitude of potential injuries.  Teams know how much they will be affected by injuries when constructing their rosters before the season.

In reality, however, teams will vary significantly in terms of how much they are impacted by missed games. Focusing on 2020, we looked at how much each team’s season was hindered due to injuries. To do this, we compiled data from Football Outsiders and PFF to create an Injury Impact Meta-Study. While Football Outsiders has been collecting injury information since 2001—their metric is called Adjusted Games Lost (AGL)—PFF’s WAR-Adjusted Injuries Lost (WAIL) metric is brand new. WAIL projects every player’s Wins Above Replacement (WAR) and calculates the value lost per game injured. The reason we decided to include both AGL and WAIL is because WAIL also accounts for positional value, whereas AGL delineates players based on whether they are starters.

Here are the results of our Meta-Analysis: 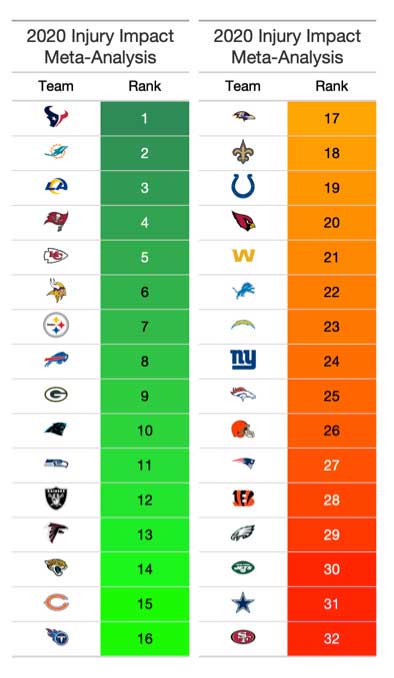 Based on this study, here are my key takeaways:

The Buccaneers’ streak of health

Though the Super Bowl champs finished fourth in our Meta-Analysis, they were first in Football Outsiders’ Adjusted Games Lost. AGL is slightly stable from season to season. This means that team injuries are not completely random; in other words, teams at the top/bottom of the league in Injury Impact have a reasonable chance of being there again next season. This bodes well for the Bucs, who also finished second in AGL in 2019.

In addition to AGL’s stability, I see two other reasons why the Buccaneers should be optimistic about continuing their injury success:

The 49ers were 32nd in our Meta-Analysis, as they finished last in both AGL and WAIL. According to PFF, the 49ers had the worst season of any team since 2012 in terms of WAR-Adjusted Injuries Lost. QB Jimmy Garoppolo, TE George Kittle, EDGE Nick Bosa and CB Richard Sherman all ended up on IR in 2020.

If the 49ers can even get close to average in terms of injuries, they will have a legitimate chance to win the NFC West and return to the Super Bowl. The concern, however, is that injuries are somewhat stable from year to year. We once conducted a study and found that prior injury history is an even bigger factor than age when predicting future injuries. In other words, even though Garoppolo is more than 14 years younger than Brady, he’s more likely to get injured in 2021 due to his injury history.

The good news for 49ers fans is that they have Trey Lance looming in case of a possible injury to Jimmy G. Overall, there is no doubt the 49ers have a talented roster, but their injury fortunes must improve for them to reach their potential.

Just ahead of the 49ers, Dallas was 31st in our Injury Impact study, and the main explanation for this is straightforward: Dak Prescott’s ankle fracture was the single most impactful injury of 2020. The Cowboys had other injuries, but Prescott was the most indispensable. In fact, the Cowboys were the second-worst team since 2012 in PFF’s WAIL. Regardless, I am more optimistic about the Cowboys’ outlook in 2021 than the 49ers. The majority of the Cowboys’ injury impact hinges on one player, so if Prescott can stay healthy, they have a good chance of winning a weak NFC East.

The Rams rely on health

Right above the Buccaneers, the Rams finished third in our injury study. This is not new for the Rams either—they have been one of the best teams in AGL since finishing last in 2011. They have been in the top four in four of five seasons since moving to L.A. in 2016, finishing first in both 2016 and 2017.

Such injury success would enable any team to perform close to their peak, but it’s especially important for the Rams. From a roster construction standpoint, they are the most superstar-driven team in the NFL. The Rams will go seven consecutive seasons without a first-round pick, most recently trading two first-rounders, a third-rounder and Jared Goff to the Lions for Matthew Stafford.

For the Rams to be successful in 2021, they will need to bank on injury stability. Their sports medicine and performance staff has done a remarkable job and will need to replicate that moving forward. The Rams are paper thin on their offensive line, and last season’s top defense will rely heavily on veteran superstars Aaron Donald and Jalen Ramsey.

The Patriots were 27th in our Meta-Analysis, and they were by far the team most affected by COVID and opt-outs. Per Football Outsiders, New England had more than twice as many adjusted games lost due to COVID than any other team. Specifically, Dont’a Hightower and Patrick Chung opted out, and the Pats dealt with a COVID outbreak in October 2020 with QB Cam Newton being their first player to test positive.

This offseason, the Patriots spent big in free agency. According to Over the Cap, they are third in Active Cash Spending behind Tampa Bay and Dallas at $226,075,561. Rookie QB Mac Jones will join new additions Jonnu Smith, Hunter Henry, Nelson Agholor and Kendrick Bourne to form a new-look offense in Foxborough. Coupled with the return of Hightower, Kyle Van Noy, and Trent Brown, the Patriots have put themselves in a position to compete with Buffalo for the AFC East crown.