One of the most challenging obstacles in the NFL and all sports are injuries.

When the “injury bug” hits a team, it often significantly hinders the club’s ability to succeed. A single injury can derail a team’s entire offseason plan and force the coaching staff to adjust on the fly. The quick adjustment alone provides its trials and tribulations, but the player’s absence hurts the team, too. It follows then that a team abnormally affected by injuries will have an abnormal season, most often in the form of underachievement.

Three teams from the 2021 NFL Season sustained several blows to their starting lineup, missed more than the average number of players, and saw much of their cap space tied into injured players: the Baltimore Ravens, New York Giants, and New York Jets. The Ravens did not enjoy the training camp period during which Pro Bowler Marcus Peters, 2021 second-round pick J.K Dobbins, and backup running back Gus Edwards all suffered season-ending injuries.

Throughout the season, the Ravens reported 20 players on their injured reserve, which was second-most in the league. This included the likes of Ronnie Stanley, Derek Wolfe, L.J. Fort, DeShon Elliott, Ben Cleveland, Nick Boyle, and Rashod Bateman. While Lamar Jackson never saw time on IR, he also missed five games. The Ravens $48.47M spent on IR players also ranked second-most in the NFL, just over 26.5% of their total cap.

With many key players returning to the lineup, such as Dobbins and Stanley and others, the Ravens are likely to benefit tremendously from players returning from injury. Despite the blows to Baltimore’s depth chart, they still won eight games.

The Ravens have playoff potential if their starting left tackle, running back, quarterback, and wide receiver could remain healthy (unlike last year). The AFC North could be a powerhouse division, with a reigning AFC Champion looking to run it back. However, if healthy, the Ravens can keep up with the best of them. They have many vital players returning from injury, which should be a boon for their success as a team. 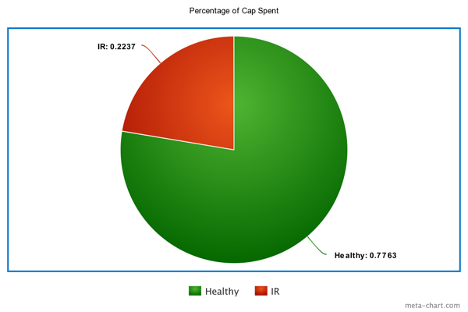 Another team that will see many players returning from injury is the New York Giants. The Giants were without a league-high 24 players on and off IR last year. Darnay Holmes, Daniel Jones, Blake Martinez, Shane Lemieux, Jabrill Peppers, Sterling Shepard, and Andrew Thomas all spent time on the injured reserve in 2021.

Throughout the season, Giants players missed 318 games, which was the highest mark in the league. Outside of IR, key players such as Saquon Barkley, first-round pick Kadarius Toney, Kenny Golladay, Adoree’ Jackson, Evan Engram, and Lorenzo Carter missed two or more games. The Giants spent $40.83M on players who saw time on IR, which amounts to 22.37% of their cap.

It is sufficient to say that the Giants dealt with setbacks at nearly every position last year due to injuries. With a new regime in New York and a healthy roster to kick off training camp, the Giants could be in a place to leap forward.

The Giants’ offense should benefit immensely if Jones, Barkley, Toney, Golladay, and Thomas can log full seasons. On the other side of the ball, they will regain their starting off-ball linebacker, Martinez. Martinez is a solid defensive option who should provide much-needed relief to the Giants’ defensive unit. Those factors, paired with some new offseason additions, prime the Giants for a big step. The Jets had high hopes for second-overall pick Zach Wilson last season, but some things did not go their way last season. For example, the Jets spent the most money in the NFL on IR players with a figure of $73.7M—that equates to a whopping 35.83% of their cap drained by players who did not take the field.

Moreover, they were without their quarterback, Wilson, for four games between Week 7 and Week 11, and they also missed slot receiver Jamison Crowder for four games.

This season, the Jets have a healthy quarterback who will finally spend some time on the field with Becton. Furthermore, the Jets regain 2021 second-round receiver Elijah Moore who had the sixth-most receiving yards and tied for most touchdowns between Week 8 and Week 13.

Add in tenth-overall pick Garrett Wilson, and their receiving corps is strong. Furthermore, the Jets will have Breece Hall to complement the aforementioned returning players. Consequently, the Jets have plenty of potential on offense this year with the players they welcome back.