Every player is different.

For me, my preference was to play and play as much as I could because that’s what I enjoyed doing. Preseason, regular season, post-season, it didn’t really matter. If I am going to practice all week and put in the work then I want the reward of playing. I do understand the other side of it from a coach and personnel perspective.

If you are the head coach or a general manager and you have a franchise quarterback or a quarterback you feel comfortable with leading your team to the postseason, then you want to be careful. But I think you have to look at the situation with Zach Wilson. For him, it hasn’t clicked yet for whatever reason. I think there are a lot of reasons at play and it’s not that he can’t play but that he needs reps. He needs reps with the guys he is going to play with in the regular season.

The risk that you take as a coach playing your starters is they run the risk of getting hurt. That has never changed historically but you have to play them to build some chemistry and continuity with his teammates. Snap counts, route-running, leadership, establishing a presence in the huddle, and just getting familiar with the environment are important. With just one year as the starter, yeah that helps, but in my opinion, it doesn’t get you comfortable enough.

This makes every rep you take an important rep as far as leading your team.

You run the risk of getting hurt but to me, getting valuable reps and chemistry outweighs the chance of getting hurt. You obviously don’t wish that on any player but it is important to get that much-needed chemistry with the players but especially your receivers. WEDNESDAY, AUG. 17 Zach Wilson Could Return in 4-6 Weeks New York Jets quarterback Zach Wilson, who underwent knee surgery Tuesday, is in jeopardy of missing the team’s Sept. 11 regular-season opener against the Baltimore Ravens, The Athletic reported. The Jets are anticipating their quarterback to return in 4-6 weeks, a timeframe that would put […] 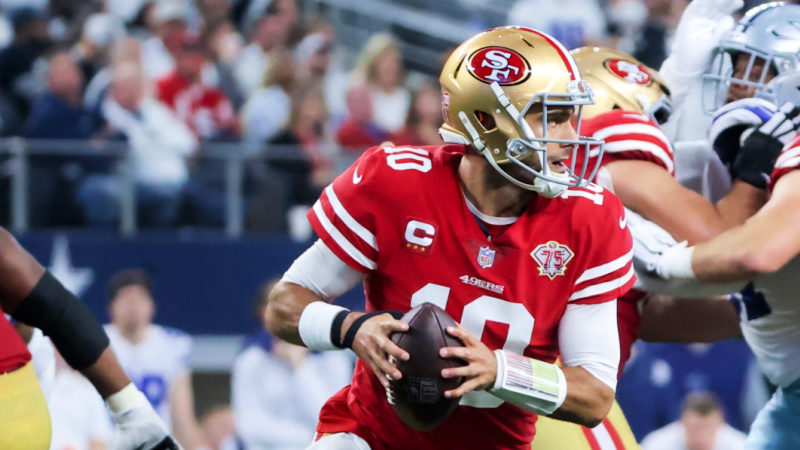 The opportunity to trade Jimmy Garoppolo might never get better than right now. After the San Francisco 49ers traded three first-round picks to move up and select quarterback Trey Lance in the 2021 NFL draft, the clock started on Garoppolo’s time with the team. After nearly leading the 49ers back to the Super Bowl, Garoppolo had […] Mond and Wilson Connect Again For the second time in Sunday’s preseason game, Kellen Mond and Albert Wilson connected on a touchdown to keep the Minnesota Vikings in their game against the Las Vegas Raiders. The pair’s first touchdown trimmed the Vegas lead to 16-13, and they connected again two Minnesota drives later to make […] New York Jets Quarterback Zach Wilson left Friday night’s preseason game with a knee injury. This is a developing story, and will continue to be updated as more information becomes available. UPDATE: Saturday August, 13 (2:50PM) The 33rd Team’s own Dr. Jess Flynn, M.D expects the injury to be on the longer side of the […] This week the New York Jets offensive line took a massive hit with the loss of Mekhi Becton. While still not official, early reports indicate he will miss the entire 2022 season. This begs the question: What is next for the Jets and their offensive line? They have several options worth exploring. Robert Saleh Likes […] One of the most challenging obstacles in the NFL and all sports are injuries. When the “injury bug” hits a team, it often significantly hinders the club’s ability to succeed. A single injury can derail a team’s entire offseason plan and force the coaching staff to adjust on the fly. The quick adjustment alone provides […] My goal in every piece of content that I write is to provide you with valuable insights that can help you make well-informed decisions that result in better bets. With that in mind, I have a confession regarding win totals: outside of rare instances, I make my win total bets somewhere between the day that […] From the fast rise of Patrick Mahomes in 2018 to Joe Burrow’s sensational sophomore campaign last year, there’s at least one quarterback every season who ascends into football’s elite, and there are plenty of candidates for a breakout season in 2022. Each one has a unique story, but all benefit from how their team builds […]