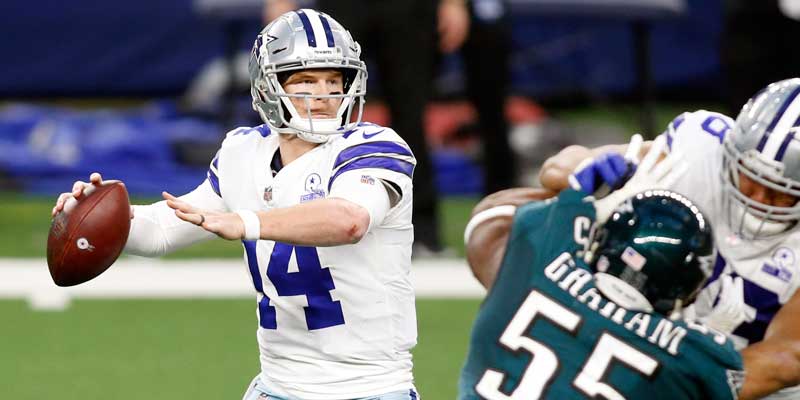 Here are five key takeaways from Week 16 in the NFL:

Amazingly, the NFC East is still up for grabs. Washington can win the division if they beat Philly next week, but the winner of the Cowboys-Giants game takes it if the Football Team stumbles. Second-year QB Dwayne Haskins gets one more chance to show that he belongs in the conversation to be a starting NFL quarterback. He was disappointing in Washington’s loss to Carolina, only completing half of his passes and throwing 2 interceptions before getting pulled in the fourth quarter. He’s had multiple opportunities to claim the job and he hasn’t been able to do it.

Remarkably, Dallas looks like the best team in the division right now. The Cowboys were outstanding on offense against the Eagles Sunday. They’ve won three straight games, averaging 36 points per game in those contests. If Washington loses and Dallas beats the Giants, the Cowboys will be a playoff team with plenty of momentum.

What started off as a dream season for the playoff-starved Cleveland Browns may end with them missing the postseason yet again. Despite going into the game Sunday with a Covid-depleted receiving corps, Baker Mayfield had a career-high 53 attempts in their shocking loss to the Jets – even though no WRs who were active for Cleveland had ever caught a pass from him. Not relying on their talented backs may be the reason the Browns miss the playoffs. Nick Chubb and Kareem Hunt form one of the best RB tandems in the league, yet they combined Sunday for just 15 carries. Now Cleveland needs to beat Pittsburgh next week to earn its first playoff bid since 2002. High drama for the Browns and their fans.

Seattle’s 20-9 win over the Rams gave the Seahawks their first NFC West title since 2016, and the headline for the Seahawks was that they did it with defense. They looked vastly improved on that side of the ball. With a healthy Jamal Adams and newly acquired Karlos Dunlap, Seattle is only allowing 18.6 points per game over the last eight games.

4. Bullish on the Bears

Don’t look now, but Mitch Trubisky is making things happen for the Bears. He’s greatly improved over the last few weeks and has won three starts in a row. He certainly will have a chance to compete for the starting job next year based on how he’s played. More importantly, he’s got Chicago in position to make the playoffs with a win at home against Green Bay next week. Over the last three weeks, Trubisky has completed 72.7%, 71.4% and 68.5% of his passes. And the Bears have averaged 36.7 points per game.

Time to think about whether teams that have clinched playoff spots should be “resting players” in Week 17. It’s a tough call, and I’ve been on both sides of this issue in my career. If you’re Pittsburgh or Buffalo – teams whose playoff seeding is already locked in, I would consider resting older/injured players. Top seed Kansas City has a massive advantage as the only team with a bye and this would be a way to at least “manufacture” some rest for key players.