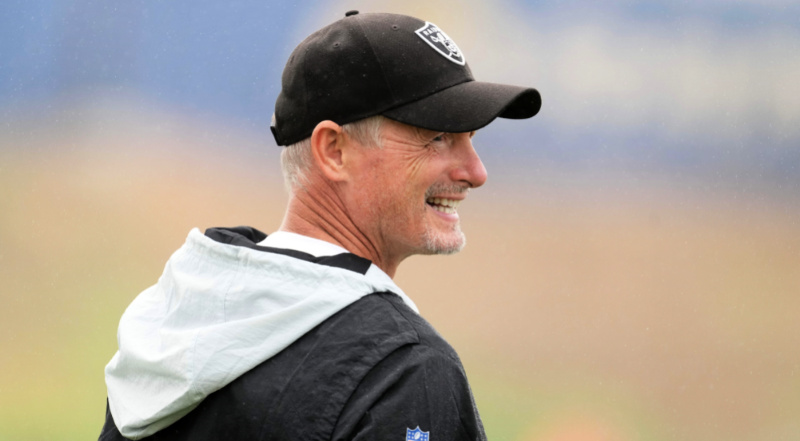 Mike Mayock may be between jobs, but his morning routine hasn’t changed all that much. Even though this will be the first NFL draft in 19 years that he will be spending as a spectator, he still spends most of his spring mornings watching film of prospects and chatting on the phone with coaches and NFL personnel people.

Since getting fired by the Las Vegas Raiders in January after just three years as their general manager, Mayock has had offers from other teams to do some draft consulting work, but decided against it. He did the same with network invitations to be involved in their draft coverage.

“What I have to fight against a little is that I’m not a patient person,” said Mayock, who spent 15 years as the lead draft analyst for the NFL Network before taking the Raiders job. “I’ve always kind of charged after whatever the next goal was. Try and go get it.

“What I’m trying to do now at age 63 is, OK, let’s be smart about whatever’s next. The GM thing was like jumping into a tunnel. You barely see family and friends. And that’s OK. You understand that going in. That’s what the job entails.

“But I just want to take a step back right now and make sure that whatever I do next is what I really want to do. Because when I commit to something, I’m all in. And I don’t want to make a mistake.”

He is enjoying his unexpected spring down time, but it has taken some getting used to. A former football and baseball player at Boston College, Mayock was up in Boston last week for a reunion with some of his former teammates before the football team’s spring game. While he was up there, he was invited to speak to the BC players.

“It’s a little bittersweet,” he said in a phone interview late last week. “On the one hand, I have a little time to ride a bike or go on a hike or work out or spend more time with my wife (Mandy). We’re visiting Boston right now and we’re going to walk around and doing stuff that we never get a chance to do. And that’s cool.

“The flip side of it is, I’m not going to lie. I know there was a Pro Day yesterday at LSU for Derek Stingley. Ordinarily, I would have been there. There’s a major tug at my heart reminding me that I’ve been doing these Pro Days for the last 20 years and I’m not there. That’s going to take a little getting used to.”

Mayock had to deal with a lot last season. In October, Raiders head coach Jon Gruden, who persuaded him to take the GM job, resigned after decade-old emails surfaced of him making misogynistic, homsosexual and racist remarks.

Three weeks later, wide receiver Henry Ruggs, the team’s top pick in the 2020 draft, was charged with four felonies for his role in a car accident that killed a 23-year-old woman. The Raiders released him the next day.

A week after that, Mayock released the Raiders’ other 2020 first-round pick, cornerback Damon Arnette, after a video surfaced online of him brandishing guns and making death threats.

Despite all of that, the Raiders still managed to make the playoffs for just the second time in 19 years before losing by seven points in the wildcard round to the eventual AFC-champion Cincinnati Bengals.

After Gruden’s resignation, Mayock promoted Raiders special teams coordinator Rich Bisaccia to interim head coach. The Raiders won their first two games under Bisaccia, but the events with Ruggs threw the entire organization into a tailspin.

They lost five of their next six, including a 48-9 defeat to Kansas City on December 12 that left them at 6-7. But they rallied to win their final four games by a total of 12 points and made the playoffs.

The Raiders were 25-24 in Mayock’s three seasons as GM. He wasn’t perfect. He and Gruden made some personnel mistakes during their three years together, including trading for wide receiver Antonio Brown in 2019 (he was released before ever playing a game for them) and reaching for defensive lineman Clelin Ferrell in the first round of the 2019 draft.

But they still put together a talented, young team that managed to overcome a mountain of adversity last season, qualify for the playoffs and come within nine yards of taking the Bengals to overtime.

Firing your general manager after making the playoffs is highly unusual. So why was Mayock let go? Only Raiders owner Mark Davis can answer that.

Mayock’s close relationship with Gruden likely didn’t help, even though Mayock did a masterful job of handling the PR fallout following the Gruden revelations and the Ruggs tragedy.

A bigger reason for his firing, though, probably had to do with Mayock’s strong belief that Bisaccia should have been retained as the team’s head coach. Mayock made that clear to Davis several times, including the day after the playoff loss to the Bengals.

“The two (special teams) guys I pushed for for years to be head coaches were John Harbaugh and Richie Bisaccia,” Mayock said. “I thought both of them would be special head coaches. To the point where I recommended both of them to Boston College, a school near and dear to my heart, back in 2007. Harbs interviewed for the job and didn’t get it. The following year he got the Ravens job and is one of the best coaches in the league.

“In my mind, I felt Richie had earned (the opportunity to be the Raiders head coach). I thought we worked incredibly well together.

“I think the way we looked at the situation was, we got this thing going the right way. We built a strong foundation. We had one of the youngest rosters in the league. Our salary cap situation was outstanding. We felt like we had the right kind of people in the building and the foundation was built. Now let’s continue to build on it. The bottom line was we were both pretty excited about the future there. Obviously, that’s not what happened.’’

No, it’s not. Davis never was sold on Bisaccia. League sources said he pretty much had made up his mind to replace him when the Raiders were 6-7. If Mayock had any chance of surviving in Vegas, he may have killed it by continuing to pound the table for Bisaccia. But he believed in him.

Bisaccia went to the Green Bay Packers as their special teams coordinator. Time will tell whether he’ll ever get another head-coaching opportunity. Mayock certainly believes he deserves one.

Despite the way things turned out, Mayock has no regrets about his decision to take the Raiders job.

“The way I’ve always been, you come to a fork in the road, you make a decision and you go and you don’t look back,” he said. “Looking back doesn’t do you any good.

“And to be honest with you, I’m happy I did it. I’m really happy I did it. I was talking to the BC kids yesterday. On the one hand, you look at it and you go, (dealing with) Antonio Brown, Gruden getting fired, the Henry Ruggs situation, the Damon Arnette situation, I mean there was a lot of stuff. Throw COVID on top of it. There was a lot of stuff going on for three years that was tough to journey through.

“But the cool thing for me and what I’m always going to remember is that I chased something really hard and I loved every second of it.

“Here’s the whole key. The whole key was we were 6-7 and we had to win four games to get into the playoffs. And this was after Gruden, after Ruggs. Bisaccia had taken over the team and the players were buying into what he was talking about. Richie’s tough. I love Richie.

“The Ruggs thing punched a hole in that building for a while. We were 5-2 and rolling going into our bye week when the Ruggs thing happened. And then we lost three in a row and five of six. People don’t recover from something like that. The whole building was just devastated. He’s a wonderful kid, but he can never get back what he did. The point is we had to win the last four games. That team rallied and won them all by a total of 12 points.

“And I never saw anything like it. It was powerful. The locker room, being around those guys as they won each game, that’s what I’m going to remember. That a group of men pulled together. It was something that was bigger than any individual. I’ll never forget that group of men. It was the most pure, most real thing I’ve ever been involved in in sports.’’

After he got fired in January, Mayock was cleaning out his closet in their Las Vegas home before driving back home to Philadelphia with his wife Mandy and their six-year-old dog Willow. He had a stack of Raiders gear that he needed to get rid of, but didn’t want to just throw it out.

A longtime coaching buddy, UCLA defensive coordinator Bill McGovern, who has had plenty of experience at getting rid of team gear during his 15 coaching stops in college and the NFL, told him he just takes it all down to the nearest fire station or police station and gives it to them.

“I was like, man, that’s brilliant,” he said. “So I literally packed up two big Hefty bags. Most of the stuff was brand new, never worn. Sweatshirts, hats, workout gear. All kinds of really nice Raiders stuff.

“I literally just drove down to the nearest fire station and knocked on the door. It’s really funny when you say, ‘Hi, my name’s Mike Mayock and I just got fired by the Raiders as their general manager. I got a bunch of gear in these bags that you guys might like.’

“The guy looks at me and says, ‘Really?’ Then he says, ‘Well, I think we’d better go talk to the chief.’

“So he takes me down the hallway to the chief’s office and the chief says, ‘Oh, that’s great. Some of the guys would love some of this stuff and we’re also having a drive going on for the community. We’ll make sure it gets into good hands.’’