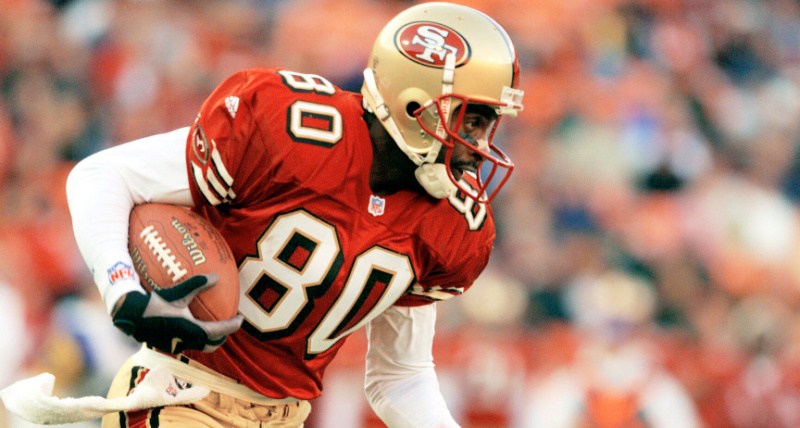 With the start of summer and a slight dip in current events happening in football, The 33rd Team took the opportunity to look back on one of the game’s greatest players in our most recent Wednesday Huddle. That player was none other than the legendary wide receiver Jerry Rice.

Marc Trestman coached Rice during his time as San Francisco in the 1995 and 1996 seasons, and again in Oakland as Rice approached the end of his career from 2001 to 2003.

Trestman began by expressing his own gratitude that he “had the opportunity to be around Jerry and coach him for five years. He taught me so much about what a professional work ethic was all about, and what greatness looks like at the highest level each and every day.”

“He really was everything. I mean, we say he’s the top three, [but] to me he’s arguably the best player in the history of the game. NFL Network I think had him as number one back in 2016, for his longevity, his reliability, his availability, and his productivity, which has really been unmatched.”

One of the first things Trestman addressed was Rice’s alleged 4.7 second 40-yard dash time by saying, “They say he ran 4.7, but he won with tremendous technique and explosion.”

In terms of Rice’s mentality and approach to the game Trestman commented:

“He wasn’t a rep guy, but if he didn’t get it the first time, he definitely had it after that. He was a really proud guy in terms of walkthroughs…He wanted to get it right immediately. Never wanted to make the same mistake twice. Very much elite hyper competitiveness. I had him at 33 years old and I had him at 40 years old. At 33 he was first on the practice field, and the last one off. At 40 he was the same. He sat in the front row in all the meetings. He was all business on and off [the field]. He stalked the week of a game like a tiger in a cage. He would just be playing catch with the managers. He really never sat on one knee with his helmet in his hand. He was always working on something throughout practice. That’s why they say he had a relentless work ethic.”

Mike Tannenbaum asked about what it was about Rice that separated him on a day-to-day basis and made him stand out, to which Trestman answered:

“His general work ethic and business-like attitude. Front row [of meetings], he hung on every word, note taking, first one in the building, he was just all business [all the time]. [He was] just tenacious and relentless. Focused on the business of being great. He always feared getting cut. Almost every day. He thought he was getting traded or cut almost every day. That’s kind of the feeling you got from him, and he was going to prove ownership and the head coach wrong each and every day, when everybody already knew that there was nobody like him.”

Tannenbaum added his own story about his time with the New York Jets when Rice spoke with them, saying “He said two things I’ll never forget. One was he said he’d never miss a special teams meeting because if he went to special teams, everyone had to take it seriously. He also said every game of his career and wore a coat and tie on game day, because that was his day at the office, and he wanted it to start [right]. The very first thing was how he dressed. Those two things really stayed with me.”

Trestman supplemented that with: “It wasn’t just the coat and tie. He spent a lot of time in front of the mirror in the locker room getting ready on game day. He was serious about everything.”

Moving on to Rice’s play on the field, Trestman commented that “Jerry Rice to me was all about technique and explosion…He was all about alignment, assignment, and adjustment. He always had a plan all the way. When he came off the line came off flat back, upper body violence with a plan…He had the uncanny ability to always seem to break a tackle, and he found ways to find the endzone…He always knew what he had to do to get open. He always had a plan of attack, and he always did it full speed.”

“You didn’t see him make a lot of catch radius or extended catches because the guys that threw to him over the years being Joe Montana, Steve Young, and Rich Gannon were all extremely accurate.”

Tannenbaum asked what the metaphorical kryptonite for Rice was and what he struggled with. Trestman replied with a story about how once Rice was upset that he only got the ball twice in a game even though the team won because he didn’t produce at the level, he thought he deserved in that game:

“He just wanted to be the most productive guy on the field every week. And he felt it was our job [as coaches] to try to do that and to get it done, and if we gave him the targets then he would produce…His kryptonite was when he didn’t produce. He liked to produce and that made him happy. Winning was the most important thing, but he wanted to be productive in wins in any type of way.”

Tannenbaum asked Marty Mornhinweg for his thoughts on Rice from his time coaching him from 1997 through 2000:

“Jerry is a proud, proud man…Nobody is going to outwork him physically or with his preparation. In doing that he became a very positive influence on everybody in the building because he had that mentality. I had Terrell Owens when he was Terrell Owens and became ‘T.O.’ I’m not sure he becomes the great ‘T.O.’ without Jerry Rice teaching him how to play receiver and how to work. One of the many things that separated him from all others is his ability to get in and out at the top of routes…He could get in and out from full speed in two steps. Some players take four or even more steps to get in and out of a route. And his expectations were sky high, not only for himself, but for his team. If that didn’t happen, all hell would break loose in a really positive way.”

When asked how he would use Rice now considering how the game has changed since Rice played, to which Mornhinweg responded simply: “I’d use him even more.”

Elaborating further, he continued with:

“He could do everything. Play inside, outside, move him from the backfield to get a mismatch…This man played faster in games. He played better in games. If he had a drop in practice, practice would stop until he caught 10 balls. It may have been from 10 yards away, but he was going to catch 10 balls before practice started again…You get him the football early and often. It’s our responsibility [as coaches] to get the football to the very best players on our team, and Jerry was one of those players even at 40.”

In reference to the way the game has changed in recent years, Trestman talked about the RPO game and how a lot of receivers are getting “candy store catches” and “freebies” on bubble screens and other similar concepts, further elaborating that “You didn’t have that in 2002. When [Rice] got 100 catches, you didn’t see many where it was just a gift on a bubble. You’ve got to hide him; you’ve got to stack him.”

When asked about whether or not Rice’s conditioning stood out from other players by Tannenbaum, Mornhinweg said:

“No question about it. Before they changed the rules, Jerry would come to training camp up in the middle of nowhere with the rookies because he wanted the extra work. This guy was not going to be outworked or out prepared by anyone. It was a challenge to him. He taught those young fellas the right way [to do it]. He was the ultimate pro. Always in shape and always prepared. His expectations always remained sky high.”

Adding on to the mentality that made Rice such a great player, Trestman spoke about a play that stood out to him: the play immediately after Tim Brown’s 1000th career reception.

“They stopped the game. And I think that really got to Rice because when he had a couple of milestones in Oakland, they didn’t stop the game. So, he came over to me because there was about a three-to-five-minute delay and he said ‘Marc, give me the ball.’ I said, ‘Yes sir.’ And then I tried to call a play that would give him the ball…That really spoke to the essence, and the pride, and the mentality of Jerry Rice.”

On the next play, Rice proceeded to take a post route to the end zone from 27 yards out.