It is a coach’s job to take the science of football and simplify it so players can execute amidst the chaos of a game. This is a season-long philosophy for most teams that starts in OTAs and training camp.

Yet, with only 19 days of preparation, the distractions of Christmas Day, a disappointing 4-10 record, and a brand-new starting quarterback, Sean McVay and the Rams’ coaching staff made things simple enough last Sunday that former first-overall pick Baker Mayfield was able to cut up one of the league’s best defenses for a 51-14 blowout win.

How did McVay and the Rams create such a simple, yet successful formula against the Denver Broncos? By using a game plan that contained a minimal set of concepts with multiple personnel and formation variations. This allowed Mayfield and those around him to play fast and with confidence. The simple but effective concepts also helped Los Angeles protect Mayfield by giving an injury-riddled offensive line an opportunity to sustain success. Here is what it looked like:

Let’s break down why these Day 1 pass-installation concepts were so effective on Christmas.

The NFL’s “stick” concept has been around for nearly 40 years. It is called weekly by every NFL team. This is a three-step, quick-game progression read where Mayfield has the flat as his first option, stick (receiver running to the first-down marker or “stick”) as his second, then resets to the back on a wide route away from the stick side as his third option. Above, Mayfield throws a 9-yard touchdown pass to Tyler Higbee wide open in the flat of a two-tight end wing set with a two-wide receiver slot to the field. Early in the fourth quarter, the Rams ran another stick concept with the same personnel grouping but a variation in formation (above). This time, the play is run to the field side with a receiver and tight end. Same drop, same read, same progression with wide receiver Van Jefferson on the stick portion of the concept. Above, the Rams show exactly the same play but hide it by starting in a bunch formation to their right side, then motioning the outside receiver in the bunch across the formation prior to the snap. The result is a wide open flat route by the tight end. Same drop, same read, same progression. This time, out of another 2 x 2 formation, Mayfield finishes his progression by throwing his flare control wide to his No. 3 option to convert for a first down (above).

Over the course of the game — with the identical drop, read and progression — Mayfield was able to complete the concept to all three players in the progression. On this stick variation above, instead of the outside receiver running the flat, he runs a 5-yard wide depart quick out (which attacks the same area as the flat but deeper). The stick runner remains the same, and the flare control running back runs a variation by sitting 5 yards over the center. The other variation of this concept is that it’s mirrored, and the quarterback has a pre-snap choice of where to start. Excellent throw to the wide depart by Mayfield. Same drop, same read, same progression with a concept variation. During the course of the game, McVay once again simplified the passing game by calling seven movement/bootleg passes. This cut the field in half, minimized protection responsibility by the offensive line, and gave Mayfield the opportunity to throw or use his legs.

The reads and progressions on bootlegs, in most cases, are nearly identical. There is generally a flat and crosser option with possible slight variations. Early in the first quarter, the Rams lined up in a two-tight end wing set, motioned a receiver to the tight end side, and called a bootleg to the right (above). The wide receiver cleared the outside third and Mayfield was left with a flat and crosser. He was able to effectively deliver the flat route with an awkward arm angle and convert for a first down. On another bootleg late in the first quarter (above), the Rams ran the same play with a slight variation. Instead of the receiver running a clear out route, tight end Brycen Hopkins ran a corner route, leaving the remaining tight end to run the flat and the backside slot receiver running the cross. Mayfield threw an excellent corner route that got Los Angeles into the red zone. After faking the jet sweep and toss right, Mayfield boots left and immediately finds a wide open Higbee in the flat with Van Jefferson on the over and Hopkins on the corner (above). The completion once again minimizes protection issues and takes the Rams easily to the 2-yard line.

The screen was another game-plan opportunity to neutralize the Denver pass rush, get the ball out of Mayfield’s hands quickly, and eliminated reads and progressions. On this second-and-7 play (above), the quick screen was beautifully executed, giving Mayfield another completion to wide receiver Brandon Powell for a first down. Above, another well-designed and executed slow screen to Higbee gave Mayfield another easy but explosive completion that put the Rams on the edge of the red zone.

The Rams only ran one traditional play-action pass that didn’t feature a boot or movement. 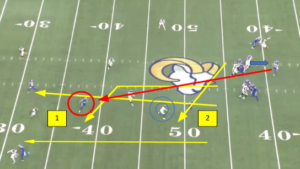 Above, out of a 3 x 1 set at the bottom of the screen, the Rams clear two outside receivers for Hopkins to run a deep out. The play action fake places the running back into the flat and leaves Mayfield with a simple progression of working to the out cut or the running back off the flat defender. Fortunately, Mayfield was able to get rid of the ball in rhythm just before pressure from DeShawn Williams, who overpowered the right guard.

There were very few drop-back passes that were over three steps in the Rams’ game plan. I believe all of them were plays that Mayfield has had experience with at some point throughout his career. He did a great job staying in rhythm, finishing progressions and understanding situational football. Above, with a universal deep curl/flat concept to his right side, Mayfield reads the curl/flat option in rhythm, resets his feet and finishes the progression by finding running back Cam Akers at the bottom of the screen for a 5-yard gain on first down.

Note: There are different ways to read this play, incorporating the curl running in the middle of the field. With Mayfield working so quickly to the wide, I would assume the middle curl would be the opportunity to climb the pocket if the wide was covered. With third-and-28 from the Denver 45, Mayfield uses his experience and situational awareness to kick out the flare-control flat rather than force a pass down the field (above). This got Los Angeles into field-goal range and led to a 3-0 lead in the first quarter.

While McVay was able to keep the game simple to maximize Mayfield and the offensive line’s effectiveness, there were still plays where Mayfield’s first overall pedigree was put on display. He did not complete 24-of-28 throws in this game on scheme alone, as he showed courage in the pocket, an understanding of protection, and an ability to throw accurately under pressure. Above, with awareness that the Broncos are bringing one more than Los Angeles has to protect, Mayfield sets his feet quickly and courageously gets the ball up and out with accuracy, knowing Alex Singleton has targeted him for the sack. This is extremely impressive execution considering he’s only had the playbook in his hands for 19 days.

With more practice time and comfort level with the system, it will be interesting to see how the Rams’ offense progresses over the final two weeks of the season. Both the coaching staff and Mayfield deserve credit for their ability to come together and create a winning game plan amidst an unpredictable season after a Super Bowl win.

Mayfield’s future with the Rams beyond this season is uncertain, but after last week’s game, the narrative is trending upward.