A trio of front office experts joins host and former NFL quarterback Matt Cassel as they break down reasons the Denver Broncos felt comfortable moving Bradley Chubb and what role Russell Wilson played in that decision. In Quick Slants, former NFL team executive Joe Banner provides a unique perspective each week on the NFL, its players and coaches. This week, he takes on multiple topics, including:

>> The Bills’ recent struggles and what it says about them

>> The need for an imbalanced offensive attack in Cincinnati

But first, a look at a linebacker in Dallas who’s drawing comparisons to one of the all-time great defenders in NFL history …

I’ve been watching football for as far back as I can remember, and I’ve gotten to see some spectacular players through the years. For me, in my lifetime, hands down the best one I’ve ever seen was Lawrence Taylor. It was unbelievable the impact he had on the game and the things he did snap after snap.

I’m not trying to be dramatic here when I make this comparison – I know LT did this over a decade and won multiple Super Bowls and Defensive Player of the Year awards – and I’m not saying this is true just yet, but for the first time in my life, I actually think we’re witnessing another player who can legitimately be brought into the same conversation as Taylor:

Parsons is not just quick and aggressive, he’s taking players that are up to 140 pounds heavier than he is and pushing them back like they’re not some of the biggest people on the face of the earth. His impact on every play in the game is just stunning.

Again, time will tell. I’m certainly not saying he’s Lawrence Taylor right now. I’m just saying it’s the first time in my lifetime I’ve seen a player down after down dominate as Taylor did with the New York Giants throughout the 1980s and early ’90s. I believe if Parsons keeps working hard and maintains his current play, he will be a legitimate comparison to the greatest football player I’ve ever witnessed.

To think that we have somebody playing in the NFL right now — less than two years removed from being drafted — who deserves to be in the same discussion as LT, is incredible.

Are the Bills Okay?

It’s easy to be shortsighted and react to things that just happened week to week. We make that mistake all the time. We overrate and underrate teams regularly because we’re reflecting on what just happened as opposed to who they are as a whole.

Why? The key ingredients for me are the ability to beat good teams on both lines of scrimmage (check), a difference-maker at quarterback (check) and a coaching staff that’s going to keep the team motivated and playing smart consistently (check). Brian Daboll did a great job last year, but I’m not watching the Bills’ offense now and thinking, “Wow, this coaching change has really made an impact.” They’re still playing smart and really well. I’m not overly concerned.

I still think they’re the best team in football right now, and that they’ll be around at the end of the season as well. They stop the pass on defense, they can throw the ball on offense, they’re well coached and play hard. Those four things are the keys that separate them from the rest of the field.

What Is the Bengals’ Problem?

We’ve talked a lot about how the passing game is the real key to winning in this era – whether it’s defensively or offensively. The Bengals are capable of having the best passing attack in the NFL. I don’t think Zac Taylor realizes the notion of staying “balanced” doesn’t always work.

Last week against Miami, the Bengals had 32 passes and 30 runs. They had the second-most yards per pass attempt (9.69) and the fourth-worst yards per run attempt (2.23) during Week 4, yet they still stuck with a 50/50 split. When they play really good teams, that strategy is going to be problematic because it will limit their scoring.

It’s not 50/50. Even with a very weak offensive line, the Bengals can pass the ball successfully. On top of that, they are struggling to run the ball (Joe Mixon is averaging 2.7 yards per carry through the first quarter of the season), which is likely a by-product of a weak offensive line.

If they are going to win their division and get another chance to make a run in the playoffs, they have to admit this is the way their team is constructed at the moment and come out throwing, stay aggressive and get the lead. Then, they can play tough, attacking defense.

If they don’t, they’re going to lose some games they should win handily – like their Week 1 loss to Pittsburgh, which looks worse and worse every week.

I believe they’ll put themselves in jeopardy if they don’t accept their team for what it is, whether it’s what they want to be or not. They’re going to be most effective throwing the ball, and they can do it more than a 50/50 split to keep defenses respecting the run.

The Impact of Good Coaching

When I ran the Eagles and the Browns, I always believed coaching was more important in football than any other sport — and by a huge margin. We see proof of that all the time.

I wrote about it a few weeks ago with Baltimore changing defensive coordinators. The two teams I’m going to focus on today are the Saints and Raiders.

The Saints, if anything, have a better roster this season than they did last year but lost their long-tenured coach, Sean Payton. You can see they’re a totally different team under Dennis Allen’s leadership this season. Whether you’re talking schematics or the general organization of the team, they just aren’t where they’ve been the past 15 years.

I’ve been saying this since Week 1 (and will continue to beat the drum), but the 2023 first-round pick Philadelphia got from the Saints prior to this year’s draft is going to turn out to be way higher than either team thought when the deal was made. You can see the difference so easily in New Orleans because it’s such an apples-to-apples comparison looking at the same team.

The Raiders are a little more difficult comparison, who I still believe will end up having a good season. The 0-3 start, combined with how tough the division is, will make it a challenge to get to the playoffs, but they’re a well-coached team. You saw it when Rich Bisaccia took over for Jon Gruden last year. The team instantly started playing better. Same players, same rosters and cap situation. Everything was the same.

They’re off to a slower start this season, but the ingredients are there for them to play really well the rest of the season. Again, where that ends up, we’ll have to see because of the challenging start.

Coaching staffs are so important to keep an eye on as you evaluate why teams are doing well or not. We tend to focus on the players and their execution and underestimate how big of an impact the coaches have on every game.

Now that we’re nearly a quarter of the way through the season, it might be time to look back at some of the more interesting player moves that got a tremendous amount of coverage in the offseason and ask the question: What are they thinking now?

Here are three players that come to mind:

Edge Randy Gregory: The pass rusher flipped Dallas for Denver, after initially agreeing to terms with the Cowboys. He’s now hurt and will miss a few weeks with a knee injury. He got paid a large amount of money in spite of his injury history and some off-field challenges. I wonder, as he compares the Cowboys and Broncos right now, if he believes he made the right decision. At the time, he appeared to acknowledge the offers were similar, but some unfavorable contract language in Dallas’ offer led him to Denver.

I think the Cowboys lucked out. They’ve replaced him with a couple of other players that cost less and created more long-term flexibility with their cap. They’re also playing tremendously well on defense right now.

WR Davante Adams: Again, I think the Raiders are going to prove they’re a solid team. But, as you watch the Packers play, and look at how challenged the rest of the NFC is in general, Green Bay is far more excited about its prospects of getting to Super Bowl LVII than Las Vegas is right now.

Adams seemed to indicate the offers from Green Bay and Las Vegas were similar. Does he wish he was still in Green Bay with a real chance to get to the Super Bowl or is he happy playing with his college quarterback in a more entertaining market? He’s averaging 6.5 catchers per game for 72.5 yards, and if his current 11.2 yards-per-catch average holds up for the season, it would represent his lowest YPC in seven years.

QB Tom Brady: We’re still not completely sure why he missed a chunk of the preseason after coming out of a two-week retirement in the spring. He looks very stressed right now. The Bucs are 2-2, and the offense has really struggled.

I wonder if there’s any part of him thinking, “You know, 22 seasons was a long time to play. Maybe I should have called it quits for real.” Like with the Raiders, I think Tampa will be highly competitive by the end of the season, but it’s going to be a real struggle. It’s obviously a different team without Gronk and some of the offensive linemen they lost in the offseason, not to mention the change in coach from Bruce Arians to Todd Bowles. On March 14th, 2022 at 12pm EST, the legal tampering period began and teams were allowed to extend offer sheets to free agents with the premise that on March 16th at 4pm EST (start of the league year), the contracts will be signed. Since then, the landscape of the AFC has completely shifted with mass […] 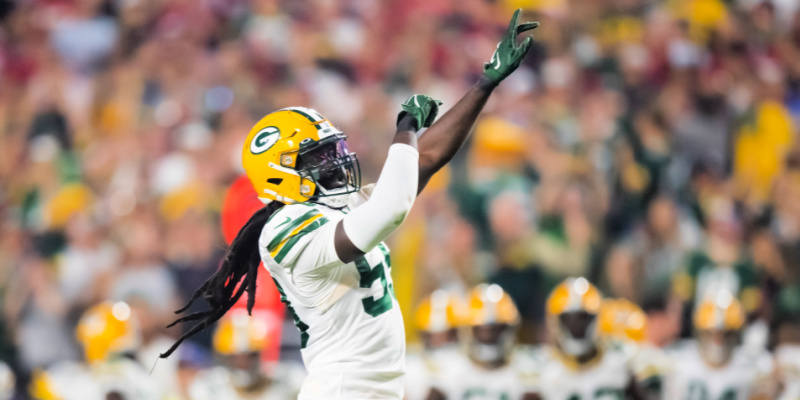 Finding value deals is key for NFL franchises, and while the most common way of doing so is with players on rookie contracts, this isn’t the only way. Every season, we see a number of players make impacts well above their salaries, and this year is no different. These five players and three honorable mentions […] At 9-4 the Dallas Cowboys hold a three game lead in the NFC East, and as everyone expected it’s been their defense has most recently led the way. Over the past 5 weeks, the Dallas defense has held 4 of their opponents to under 20 points, including allowing only 3 points to the Atlanta Falcons. […]