There’s A New Big 3 In Dallas: Parsons, Gregory, and Lawrence 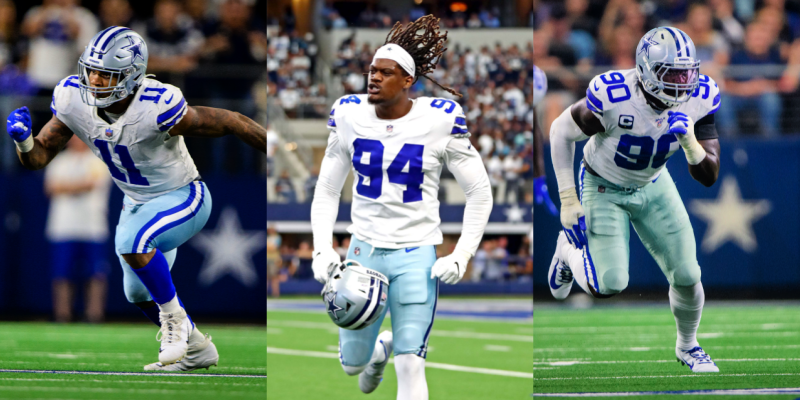 At 9-4 the Dallas Cowboys hold a three game lead in the NFC East, and as everyone expected it’s been their defense has most recently led the way. Over the past 5 weeks, the Dallas defense has held 4 of their opponents to under 20 points, including allowing only 3 points to the Atlanta Falcons.

Across that same stretch, their defensive expected points has outperformed their offensive expected points on 4 occasions, with the Week 12 OT loss to Raiders on Thanksgiving being the lone exception. Through Week 14, the Cowboys are second in the NFL in turnovers forced (27) and fourth in pressure rate (26.7%) while blitzing at just the 19th highest rate.

What has sparked Dallas’ defensive turnaround from the No. 28 ranked defense in points against last year to No. 12 in 2021?

After bringing in defensive coordinator Dan Quinn this past offseason, the Cowboys went into the 2021 Draft and Free Agency with one thing on their mind: Defense.

In free agency, the Cowboys took a chance on the upside of DE Randy Gregory by bringing him back to Dallas. Gregory has dealt with issues with substance abuse in the past ranging from 2016 to 2018.

This offseason the Cowboys brought Gregory back on a one year deal totaling less than $2.5M, pairing him with long-time Cowboy and No. 7 sack leader in Dallas history, DeMarcus Lawrence. Despite playing just 40% of the snaps in 2020, Gregory was able to produce 3.5 sacks, 4 TFLs and 12 QB hits while flashing the potential for more.

With their first 6 picks in the 2021 NFL Draft (first 4 rounds), the Cowboys selected only defenders, including key a few who have been starters this season. They selected Micah Parsons, the overwhelming Defensive Rookie of the Year favorite and potential DPOY candidate, in the first round before following up with two DBs, two DL and one LB. So far this season, all six of those players have played in 6-plus games, with 4 having played in 10 or more.

Going into Week 1, the Cowboys depth chart featured a lot of young talent, with 7 out of the 11 starters being drafted in 2016 or sooner. The season prior, the Cowboys averaged 22.8% pressure rate which was 14th worst in the NFL. The goal for the team was to sure-up the back-end with young, long and athletic DBs while assembling a front that could get pressure on the QB without frequently bringing the blitz.

The Cowboys assembled three premiere pass rushers on their defensive line, along with some exceptional role pieces in the interior. With Gregory, Lawrence and Parsons leading the way defensively, the Cowboys felt they were set up for success. However, injuries have struck this team in 2021, as Lawrence and Gregory both have missed time. Prior to the Week 14 bout against the Washington Football Team, their trio had only played 28 snaps together. Finally, Dallas was able to get all three on the field at once in Week 14.

The Cowboys forced 4 turnovers (1 INT and 3 fumbles), while collecting 5 total sacks. The Big 3 forced the majority of the pressure:

If we focus on the game against Washington, not only did this ‘Big 3’ produce on their own, but their complimentary rotational pieces of Neville Gallimore (first game back from injury) and Osa Odighizuwa benefited as well. When the OL has to deal with three premier, top-of-the-line pass rushers on every snap, there is a lack of focus on interior pass rushers such as Tarell Basham (23.5% pressure rate), Gallimore, and Odighizuwa, who all have strong pass rush upside.

Likewise, how about the versatility of these defensive players brought in for the Cowboys? For years, Bill Belichick and Nick Saban have preached and shown the mismatch and effectiveness that a versatile defense can create. Two prime examples on the Dallas defensive include the usage of Parsons and Jayron Kearse.

Parsons has lined up on the LOS as a DL/OLB for 343 snaps this season, while also lining up off-ball as a LB/ILB on 436 snaps.

Kearse, the 6-4, 215-pound safety, is the most versatile piece for Coach Quinn in terms of alignment. Kearse has played 141 snaps on the LOS as a DL/OLB, 331 snaps as an off-ball LB, 167 snaps as a slot corner, and 161 snaps as a free safety. Few players in the NFL have lined up all across the defense as often. Kyle Dugger of the Patriots, Jeremy Chinn of the Panthers, Malcolm Jenkins of the Saints, and Jamal Adams of the Seahawks are among the very few who have seen similar playing time across each position group.

The strategy in Dallas of using the majority of their draft picks on defensive players has panned out well over the first year of implementation. It has allowed them to continue to perform well in crucial games (in conference) without their offense firing on all cylinders, which is a vast improvement from the 2020 Cowboys team.