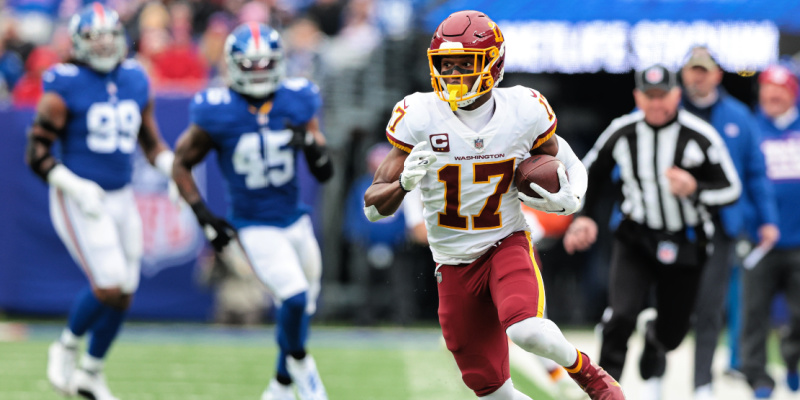 With the top of the wide receiver market booming, it wouldn’t be surprising to see a WR like Deebo Samuel, DK Metcalf, or Terry McLaurin get traded for multiple first round picks in the near future. Because of this increasingly inflated value, I got to thinking about what it might take for a team to use the exclusive franchise tag on a non-QB. In order to do this, it is important to go through the differences between the exclusive and non-exclusive franchise tenders as well as the current state of the WR market.

A player who is offered an exclusive franchise tender gets a one year, fully guaranteed contract equal to the average of the top five salaries at the player’s position for the current year, or 120% of their previous salary, whichever is greater. This figure can be significantly higher than the more often used non-exclusive franchise tender, which rewards the player with the average of the five largest prior year salaries at the player’s position. As per Article 10 Section 10(a)(i) of the CBA, a player who receives a non-exclusive franchise tender “shall be permitted to negotiate a Player Contract with any Club as if he were a player subject to Section 5 below, except that Draft Choice Compensation of two first round draft selections shall be made with respect to such player in the event he signs with the New Club.”

These percentages then get multiplied by the 2020 salary cap ($198.2 million) to get the full franchise tender figure. In this case, the exclusive tender would equal $16.39 million, and the non-exclusive tender would equal $15.84 million – a difference of more than half a million dollars. You can see how this difference could be much greater when the position sees a steady increase from season to season – like the wide receiver position has.

Dak Prescott is the last player who received the exclusive franchise tag. It makes sense that a QB would receive the exclusive franchise tag, since they are the most expensive, and often the most important, player on a team and a team would not want to risk that another team would forfeit two first round picks in order to steal the player away from their previous club. However, non-QBs seldom receive this type of tag. This is largely because of the fact that these players don’t often get traded for multiple early round draft picks. As we will see, this has changed dramatically.

The wide receiver market this offseason skyrocketed, both in terms of contract and trade values. We saw eight players get signed or extended for more than $20 million APY. We also saw three significant trades for players who were rewarded by their new teams with contracts exceeding $25 million APY. Each of these players were traded for a 1st-round pick and at least one other Day 2 selection.

Looking at these trades, it wouldn’t be surprising to see a receiver who is in-line for a record-breaking contract get traded for multiple first round picks. Samuel, whose contract will expire at the end of the 2022 season, requested a trade early in the offseason, but remains on the 49ers roster. Both Metcalf and McLaurin’s contracts expire at the end of the 2022 season as well. All three players have been high level starters over the first three years of their careers and will likely be looking for contracts exceeding $20 million APY.

Likewise, if Justin Jefferson became available in a trade, he would likely command the same if not more than Adams or Hill did this offseason thanks to the fact that he is far younger and still on a rookie contract through the 2023 league year. It will be a little while longer until he hits unrestricted free agency though since — unlike Metcalf, McLaurin, and Samuel — he was a 1st round pick and the team has a 5th year option it will likely exercise. Jefferson will become eligible for an extension after this season and the Vikings’ new front office could decide to completely rebuild without a non-QB taking up more than 10% of the team’s cap.

Of course, each of their respective teams could choose to franchise tag the players once they reach unrestricted free agency if they cannot come to an agreement on a long-term deal. However, these teams would run the risk of losing the player if they only used the non-exclusive tender. The 2022 non-exclusive franchise tender was equal to $18.419 million. This figure is projected to be around $20 million in 2023. Therefore, even assuming a conservative 1% increase (in terms of percentage of league salary cap) from the non-exclusive to exclusive tag figures, the exclusive tag should be somewhere near $22.25 million in 2023.

If one of these teams are worried that another club would risk two 1st-rounders for their star receiver and what it would do to their offense, they should think about using the exclusive tag as a $2 million ”insurance policy” rather than the non-exclusive tag and risk losing the player, even if they get a significant amount of draft capital in return.

Read More: Exploring the Successes and Failures of the Franchise Tag