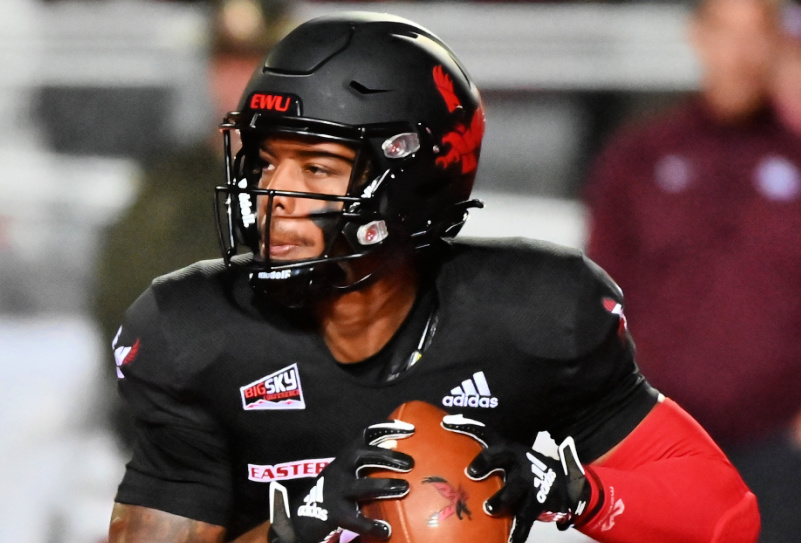 While most of the fanfare and conversation about NFL Draft prospects traditionally surrounds high-profile FBS programs, schools at the FCS generate high-end talent every year, and prospects from those schools should not be overlooked. Each week, The 33rd Team highlights a handful of FCS standouts from small schools around the country. Here are 5 players who caught our eye in Week 11.

Another week, another dominant performance from Eastern Washington’s Eric Barriere. Against a top 10 opponent in UC Davis, Barriere completed 34 passes on 54 attempts for 411 yards, 3 touchdowns, and 0 interceptions. It was Barriere’s 7th game this season with over 300 passing yards and his first since he threw 600 yards and 7 touchdowns against Idaho. It also continued his impressive streak of throwing for at least 2 touchdowns in every single game this season, something he’s done 17 of his last 18 starts.

The majority of Barrier’s success on Saturday came in the intermediate area of the field where he completed 12 of 23 for 229 yards, 1 touchdown, and 1 big time throw. On throws in the short area, Barriere threw 2 of his touchdowns and was the highest graded QB of the week at 83.6. As his final collegiate season comes to an end, Barriere is once again putting up historic level production. He’s surpassed career highs in passing yards, touchdowns, while once again being nominated for the FCS Player of the Year. Barriere will lead his squad into Oregon next week to take on Portland State in the regular season finale.

Montana State EDGE Daniel Hardy showed once again why he’s one of the best pass rushers in the FCS. Hardy recorded an unbelievable 9 pressures on Saturday and had a weekend high 38.1% win rate. He also had 1.5 sacks, his first sacks since they played Weber State a few weeks ago, and a pass rushing productivity score of 28.6. Hardy’s performance earned him a PFF grade of 80.1 to along with a 72.6 pass rushing grade and 72.1 grade in run defense.

After receiving inconsistent playing time his first 3 seasons, Hardy has firmly established himself as a dominant force. He’s just outside the top 10 in sacks with 9.5 and has 16.0 tackles for loss, 1 forced fumble, and 3 pass breakups. He had far and away his career best PFF grade 78.7, a massive step up from the 60.6 he posted in 2019.

With 2 key interceptions last weekend, the highest graded cornerback in the FCS was Marte Mapu. He was targeted 6 times in coverage and allowed just 2 catches for 7 yards and no first downs. Mapu also didn’t commit a single penalty or miss any tackles.

Mapu has been excellent for Sacramento State this season with the 5th highest PFF grade amongst cornerbacks at 84.4 and the third highest coverage grade. He’s allowed just 7 first downs all year, has a passer rating against of 32.1, and has picked off 5 passes.

Dayton running back Jake Chisholm put together one of the top offensive performances of the season in week 11. His incredible day consisted of 334 all purpose yards and 5 touchdowns. He rushed for 226 yards on 34 carries and had 3 catches for 46 yards and 2 touchdowns.

Chisholm’s performance Saturday was a good reminder of how versatile he is as a running back. As a freshman, Chisholm didn’t get into the lineup until his 6th game where he then took over kick return responsibilities and flourished, averaging 22.0 yards per kickoff return. His sophomore year, Chisholm led the FBS in all purpose yardage with 204.3 per game, had 1,129 rushing yards, and led the PFL in yards per carry despite not starting a game until Week 5. With the starting job belonging solely to him this season, Chisholm has been spectacular and is on pace to break all his previous career highs.