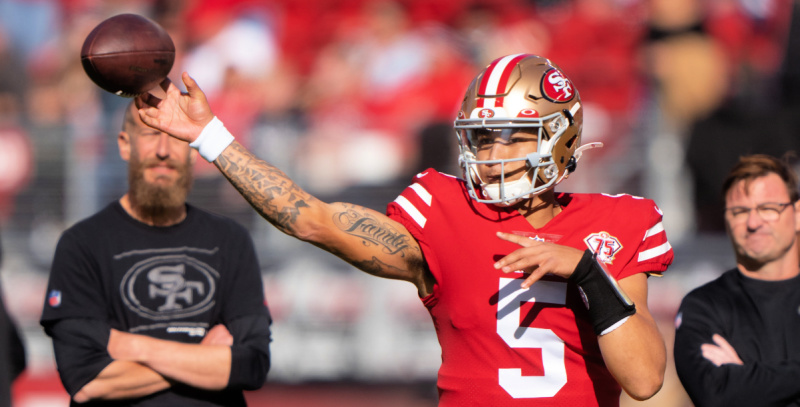 After a long offseason featuring plenty of media discussions and reports, San Francisco 49ers Head Coach Kyle Shanahan made it official this afternoon. Trey Lance will be the 49ers’ starting quarterback in 2022 and beyond.

The decision about what the 49ers would or should do with long-time starter Jimmy Garoppolo was long-debated, but in the end, the team decided it was best to move on and let Garoppolo pursue opportunities as either their backup quarterback or on a different team.

John Lynch and Kyle Shanahan met this morning with Jimmy Garoppolo. The three men talked, and after, Shanahan told reporters, “We have moved on to Trey.”

The 49ers traded three first-round draft picks to move up and select Trey Lance third overall in the 2021 NFL Draft. After a rookie season on the bench where Lance threw just 71 passes in six appearances, the 49ers are ready to see what Lance can do as their starting quarterback.

Joe Banner, a former NFL executive and a Founder of The 33rd Team, believes that Trey Lance “is simply just a better player than Jimmy Garoppolo” at this stage of their careers.

Rich Gannon, a former NFL MVP QB and a contributor to The 33rd Team, said he’s excited to see Trey Lance play this season and to see the changes Lance will bring to the offense.

“This offense is going to look a whole lot different going from Jimmy Garoppolo to Trey Lance. He [Trey Lance] is a big, strong, athletic quarterback that can make plays with his legs. I think you’ll see Kyle Shanahan move the pocket more with Trey Lance, get him out on the edge and allow him to utilize his feet. There will be more designed runs for the quarterbacks, more RPOs, those sort of things. Kyle Shanahan is a smart coach, he’ll build and tailor his offense around what Lance can do. He [Lance] is a winner. People I speak to about him speak glowingly about the kind of person he is.”

A successful quarterback at North Dakota State, Trey Lance proved his dual-threat ability in college. His talent made Shanahan a huge fan. Before the draft, Shanahan said he wanted a quarterback that “throws like Drew Brees and runs like Lamar Jackson.” While those are lofty comparisons to use at this stage, the 49ers and Shanahan were big believers in Lance and believe he can be the long-term answer at quarterback that can take their offense to a level Jimmy Garoppolo couldn’t.

Gannon also praised the decision to sit Lance as a rookie behind Jimmy Garoppolo.

“Quarterbacks need time to develop. The worst thing you can do with a young quarterback is to throw him out when he’s not ready. He starts to lose confidence, the team starts to lose confidence in him, the fans start to get on to him. I think that year last year learning and being an apprentice behind Garoppolo was a good thing for Trey Lance. It will put him in a position where he’s better prepared for the opportunity in front of him here in 2022.”