There are five coaching openings around the NFL, and there’s plenty of debate on which one has the best situation. Let’s take a birdseye view and examine the owners, general managers, quarterbacks and draft capital situation for each team.

Ownership: Michael Bidwill relied heavily on former general Steve Keim during previous coaching searches, with one person calling Keim “his personal sounding board.” This will be the first time Bidwill, who succeeded his late father Bill as the team’s principal owner in 2019, is doing it without him by his side. General Manager: Keim resigned from his position Monday after taking an indefinite, health-related leave of absence in mid-December. Arizona will be looking for a new general manager for the first time since 2013. The plan is to hire a general manager before the coach. Vice president of pro personnel Adrian Wilson and vice president of player personnel Quentin Harris are two potential in-house candidates.

Draft picks: The Cardinals own the No. 3 overall pick and have five picks overall in the 2023 NFL Draft. OverTheCap.com projects them to get three additional compensatory picks after losing receiver Christian Kirk, edge Chandler Jones and running back Chase Edmonds in free agency last year.

Quarterback situation: Kyler Murray signed a five-year, $230.5 million extension last year, locking him in through the 2028 season. He tore his ACL in Week 14 during a Monday Night Football game, and former coach Kliff Kingsbury said Murry he won’t be ready for the start of the 2023 season. Backup Colt McCoy is under contract for one more year and is widely respected in Arizona, but it wouldn’t be a surprise if the Cardinals look to add one more capable quarterback in the offseason. Ownership: Billionaire hedge fund manager David Tepper purchased the Panthers in 2018, and he made his first major coaching hire in 2020, bringing Matt Rhule in from Baylor on a reported seven-year, $62 million contract that left other owners upset with the amount for a first-time NFL coach. Rhule did not work out, and he was fired after the Panthers started 1-4 this past season. He won 11 of 38 games for Carolina.

General Manager: Scott Fitterer was hired in 2021, though Rhule had the final say over the roster. It’s unclear what the structure will be for the next coach.

Draft Picks: The Panthers own the No. 9 overall pick and have seven picks overall in the 2023 NFL Draft.

Quarterback situation: Sam Darnold started the final six regular-season games, leading the team to a 4-2 record. Darnold is set to be a free agent. Carolina used a third-round pick on Mississippi QB Matt Corral last year, though he missed the entire season because of a foot injury. Fitterer said during his end-of-season press conference the Panthers need to find a long-term answer at quarterback.

“We don’t want to force that. But, eventually, we do need a guy that we need to draft and develop. We need someone who is homegrown that is going to be here for a long period of time. Whether that’s Matt, or that’s Sam — who is still a young quarterback — or someone else, we’re going to keep all of our options open and do what’s best for the team.” 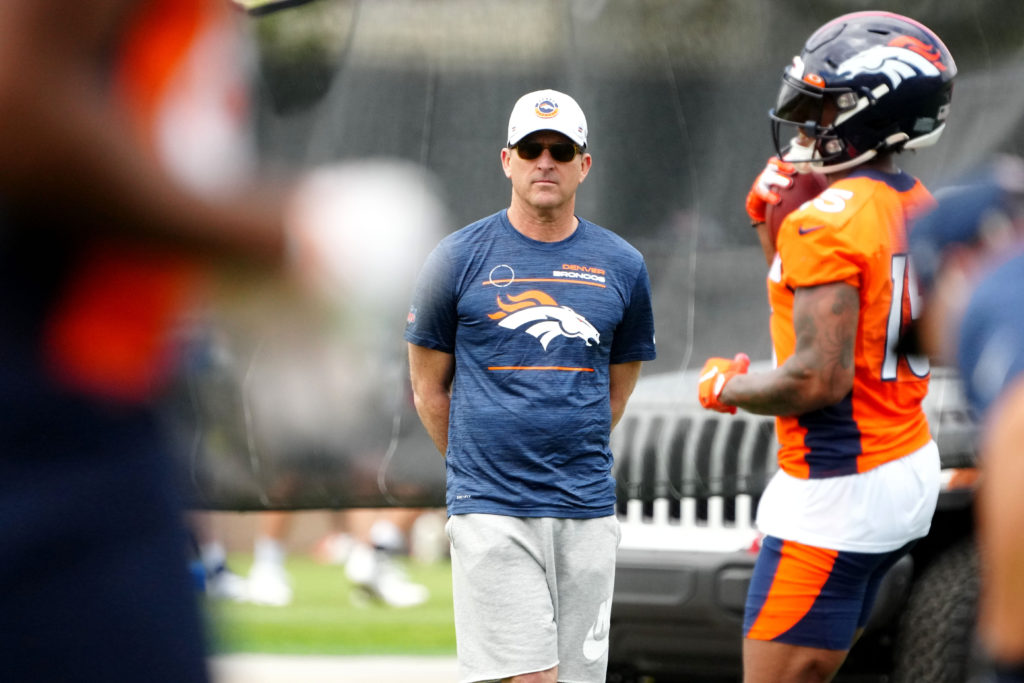 Ownership: Walmart heirs Rob Walton and Greg Penner purchased the Broncos for $4.6 billion in early August. They fired Nathaniel Hackett after a disappointing season, and this is their first coaching search. The one clear thing is Denver will go all-out to get the candidate it wants and money will not be an issue for this group. It’s worth noting Condoleezza Rice, a member of the Broncos’ ownership group, has deep ties to Stanford University, where Michigan coach Jim Harbaugh coached from 2007–2010. Penner, who also got his MBA from Stanford, told reporters he’s looking for CEO-type qualities in the team’s next coach, and that person will report directly to him.

General Manager: George Paton is entering his third year with Denver, and this hire will be his third coach after he inherited Vic Fangio in 2021 and hired Hackett last year. Paton signed a six-year contract when he joined the team, and he received full control of personnel – but it sounds as if that might flip with the new owner’s vision for their next coach.

Draft Picks: Denver doesn’t have its first-or second-round picks because of the Russell Wilson trade, but it acquired San Francisco’s first-round pick from the Miami Dolphins via the Bradley Chubb trade. Denver has six picks overall.

Quarterback situation: Denver traded for Wilson last offseason and signed him to a five-year, $243 million extension, including $161 million guaranteed. Wilson’s first season in Denver was one to forget and had people thinking the trade could be among the worst in NFL history. Denver’s next hire will be tasked to fix Wilson and get him back to playing at a Pro Bowl level. Ownership: Cal McNair told reporters on Monday he will be more involved in the coaching search this time around – after leaving it all in the hands of general manager Nick Caserio the past two tries.

General Manager: Houston hired Caserio in 2021, and this will be his third shot at hiring a coach after David Culley and Lovie Smith were both one-and-dones. Caserio signed a lucrative six-year contract when he joined Houston to fix a team with a bad cap situation and a dearth of draft picks. Smith was not the hire he expected to make last year, but things took a turn after Brian Flores filed a racial discrimination lawsuit against the NFL. Caserio’s seat is getting warmer, and he said multiple times on Monday he’d be willing to step aside into a smaller role if that was needed to secure a top coaching candidate.

Draft Picks: The Texans own the No. 2 and No. 12 (via the Deshaun Watson trade) picks in the 2023 draft and have 13 picks overall. Houston also owns two first-round picks next year.

Quarterback situation: Houston used a third-round pick on Davis Mills in 2021, and he has started 26 games in his two years with the team. Mills has two years left on his contract and could be a perfect backup for a team that might use a high draft pick on a quarterback in April.

Ownership: Jim Irsay has, for the most part, been a hands-off owner, but that changed drastically in the past year when he ordered quarterback Carson Wentz to be traded last offseason, had QB Matt Ryan benched early this season and then fired coach Frank Reich and brought in Jeff Saturday, who had no NFL coaching experience, to be the team’s interim head coach. Irsay has the final say in who will be the team’s next coach, and Saturday will be a candidate.

General Manager: Chris Ballard has been the Colts’ general manager since 2017, and this will be his second time leading a coaching search. Josh McDaniels was his first choice in 2018, but that blew up after McDaniels opted to return to New England after agreeing to take the Colts’ job. Ballard pivoted to Reich, who was not on his initial list of candidates.

Draft Picks: The Colts own the No. 4 overall pick and have seven picks overall in the draft.

Quarterback situation: The Colts have had a different starting quarterback in each season since Andrew Luck abruptly retired before the 2019 season. Jacoby Brissett started in 2019, Philip Rivers in 2020, Wentz in 2021 and Ryan in 2022. Ryan will likely be released, and they will have another new quarterback next season. The big question is if they will use a high draft pick to get one.