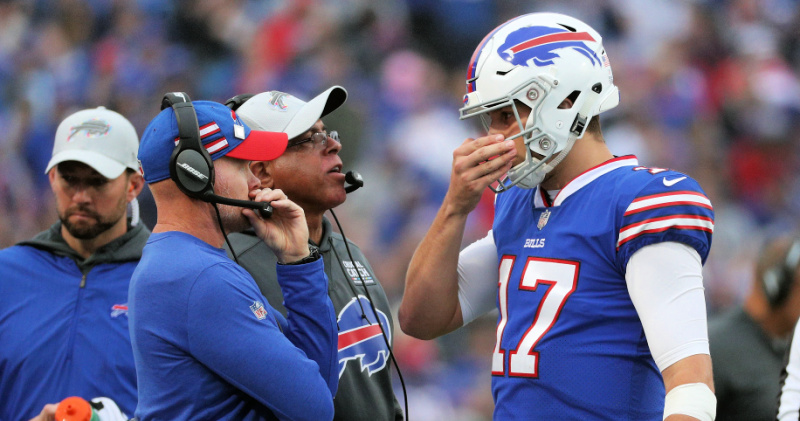 Sean McDermott is entering his sixth season as the Buffalo Bills’ head coach, and the way he and Brandon Beane have built the team is very interesting considering the former’s background as a defensive coordinator.

Traditionally, defensive coaches have preferred to win in low-scoring affairs with ball control, field position, and, of course, strong defense. As a result, those coaches tended to value the ‘game manager’ archetype at quarterback, which was a euphemism for an otherwise unremarkable player who would protect the ball and avoid unforced errors.

Building Around the Quarterback

Josh Allen is certainly not that.

Instead, Buffalo has turned that concept on its head a bit. The Bills can afford to be extremely aggressive on offense because their defense is strong enough to minimize any mistakes made by the create-a-player they have under center. More simply, the Bills play Madden on offense and Real Football™ on defense.

During the past two seasons, Buffalo has had the second-highest neutral script pass rate* (69%) in the NFL, which explains, at least in part, their status as one of the most efficient offenses during that time period. That said, it would be disingenuous to explain away the Bills’ offense as a function of simply playing the odds. As reckless as he can still be at times, Allen has really turned a corner the past two years. As you can see, the success they’ve found has largely coincided with Allen being more precise with his throws and making smarter decisions in general. The question is now how much the departure of former offensive coordinator Brian Daboll will affect Allen going forward.

Daboll did a great job of simplifying the reads, with Allen often picking a side to read based on the pre-snap look in 2×2, or making triangle or high-low progressions out of trips with something coming into his vision late from the back side.

Daboll also did a good job of mixing in play-action shot plays and spread-and-shred quick game concepts. It remains to be seen if the game has really slowed down for Allen the past two years, but there’s also no reason for the Bills to fix what ain’t broken.

First-year OC Ken Dorsey has been with the team for three years, and any appreciable difference between him and his predecessor will likely come down to game-planning and sequencing more than the offensive design.

Keeping the Defense Together

Buffalo also has continuity on the defensive side of the ball. There has admittedly been some reshuffling along the defensive line with Jerry Hughes and Mario Addison gone, but the arrival of Von Miller and a potential second-year breakout from Greg Rousseau could very well make up for their departures.

Meanwhile, the back seven returns six starters from 2021, and the Bills took cornerback Kaiir Elam in the first round to complete a secondary highlighted by All-Pro safeties Micah Hyde and Jordan Poyer. Buffalo will also get star corner Tre White back after he missed the playoffs following an ACL tear last November.

This could finally be the year the Bills return to the promised land. The Chiefs have been their kryptonite the past few years, but Kansas City lost a bit of firepower on offense this offseason, and who knows how last year’s divisional-round game would have gone without Tyreek Hill

Of course, there’s no guarantee these teams even meet in the playoffs again, but the Bills seem as strong as ever and should be among the favorites to emerge from the AFC.