Former Buccaneers quarterbacks coach Clyde Christensen has been around some of the best passers in the league’s history. Having coached both Tom Brady and Peyton Manning during his career, he discusses with Jade McCarthy how, while the game is the same, the way these two processed it was different. Both players found sustained success in the league, and it’s their unique approaches that had Christensen constantly learning, even as a coach. There are many things to look forward to on Championship Sunday, and another installment of Joe Burrow vs. Patrick Mahomes is at the top of the list.  It is such an attractive part of Sunday’s lineup that it’s being paid a week-long compliment: comparisons to the best quarterback rivalry we’ve ever seen, complete with musings […]

Bill Polian shares a legendary training camp story about Peyton Manning and how he pranked multiple people one year during the Colts’ camp. Polian provides context regarding the terrain of their host site Rose-Hulman Institute of Technology, and how they used golf carts to get around.

During the third week of camp, Polian realized his golf cart was missing. It was later found on a raft in the middle of the lake. Polian light-heartedly confronts his primary suspect, who also happens to be his starting quarterback. A week later another golf cart was stolen. Manning’s response? “Wow, the cart thief strikes again.” 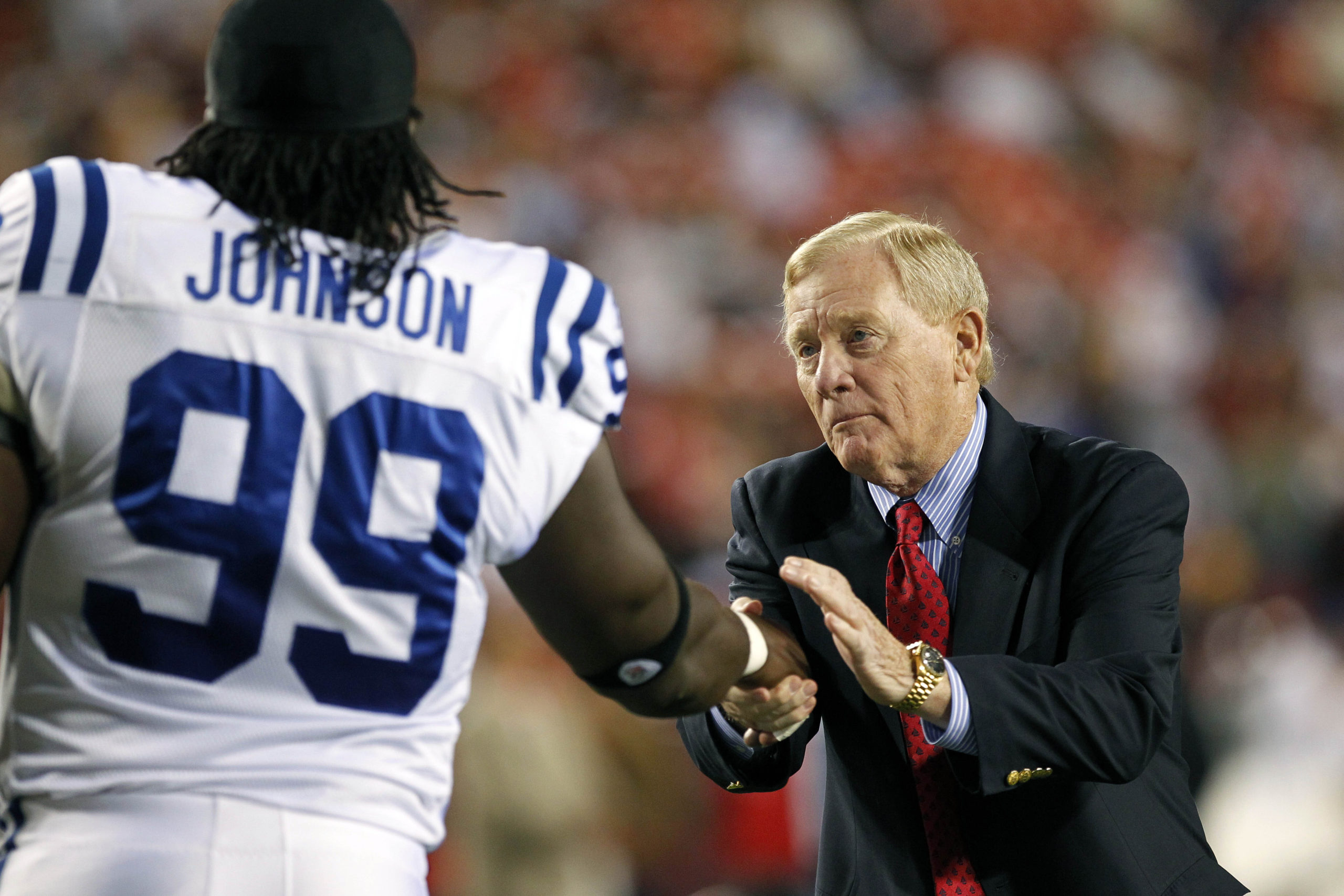 As a general manager in the NFL, you’re scared to death this time of year. You go into every preseason game holding your breath about the possibility of injury, because these games don’t count in the standings. It literally keeps you up at night. Football’s a contact game…a collision game. There are going to be […] Each new season comes with the promise of new and exciting statistical achievements. A single-season record chase is always something fans enjoy tracking. Despite often downplaying personal success, players no doubt want to make an imprint on NFL history by breaking a record if given the chance.  Peyton Manning half-jokingly expressed this sentiment in his […]

The Indianapolis Colts have been hoping to return to the Super Bowl for more than a decade. Andrew Luck, although an excellent quarterback in his own right, sadly faced too many injuries and couldn’t quite get the Colts back to a title.

Indianapolis might have an answer in longtime Atlanta Falcon-and now Indianapolis Colt-Matt Ryan.

Bill Polian, a former NFL General Manager, Team President, and current Contributor to The 33rd Team, weighed in on the new QB.

“He’s an experienced guy, he’s a highly competitive guy, he’s not had a lot of injuries in his career, and his arm is still good,” Polian said. “He can still throw the ball. His head, his processing, his leadership – it’s off the charts. And he brings with him a gravitas that they have not had at that position since Peyton’s been there.”

Ryan is reportedly already blowing away coaches and teammates in camp and has quickly established himself as a key leader for Indianapolis.

Polian is hearing of similarities between Ryan and Indianapolis Colts’ Hall of Fame quarterback Peyton Manning. “[Current Indianapolis Colts wide receivers coach] Reggie Wayne said, “This is scary. He’s like, Peyton. Just like the same guy in terms of how he conducts himself and how he prepares and what he’s demanding of the team. This is a real, bona fide leader.”

Matt Ryan is not getting any younger and is not necessarily a long-term answer at quarterback for the Colts in the way we would refer to Justin Herbert or Patrick Mahomes.

But that said, according to Polian: “the end game for the Colts is a team that is ready to compete for the whole megillah.” In Part 1 of this series, we discussed the historical results that the top three spenders in free agency alone each offseason have experienced over the past 10 years. Of the 24 teams in the sample who had completed three or more seasons since the offseason where they spent big in free agency, just 33% […] Thus far, the Jacksonville Jaguars seem poised to be the free agency spending leaders this offseason. By our calculations, since the start of the legal tampering period, the Jags have agreed to terms with eight players for a combined total value of $276,162,000.  Shad Khan is no stranger to spending big in free agency. In […] If for some reason you needed a reminder of the importance of the quarterback position, the NFL provided it in emphatic fashion as the offseason kicked into high gear. Between the blockbuster trade of Russell Wilson, Tom Brady’s spectacular return and the influence that has had on the Tampa Bay Buccaneers’ ability to retain free […] Wade Phillips is a long-time NFL defensive coordinator and head coach who coached with 9 different NFL teams over an illustrious career spanning from 1976 to 2019. The son of former NFL head coach Bum Phillips, Wade was a three-year starting linebacker at the University of Houston and secured his first NFL job as a […]