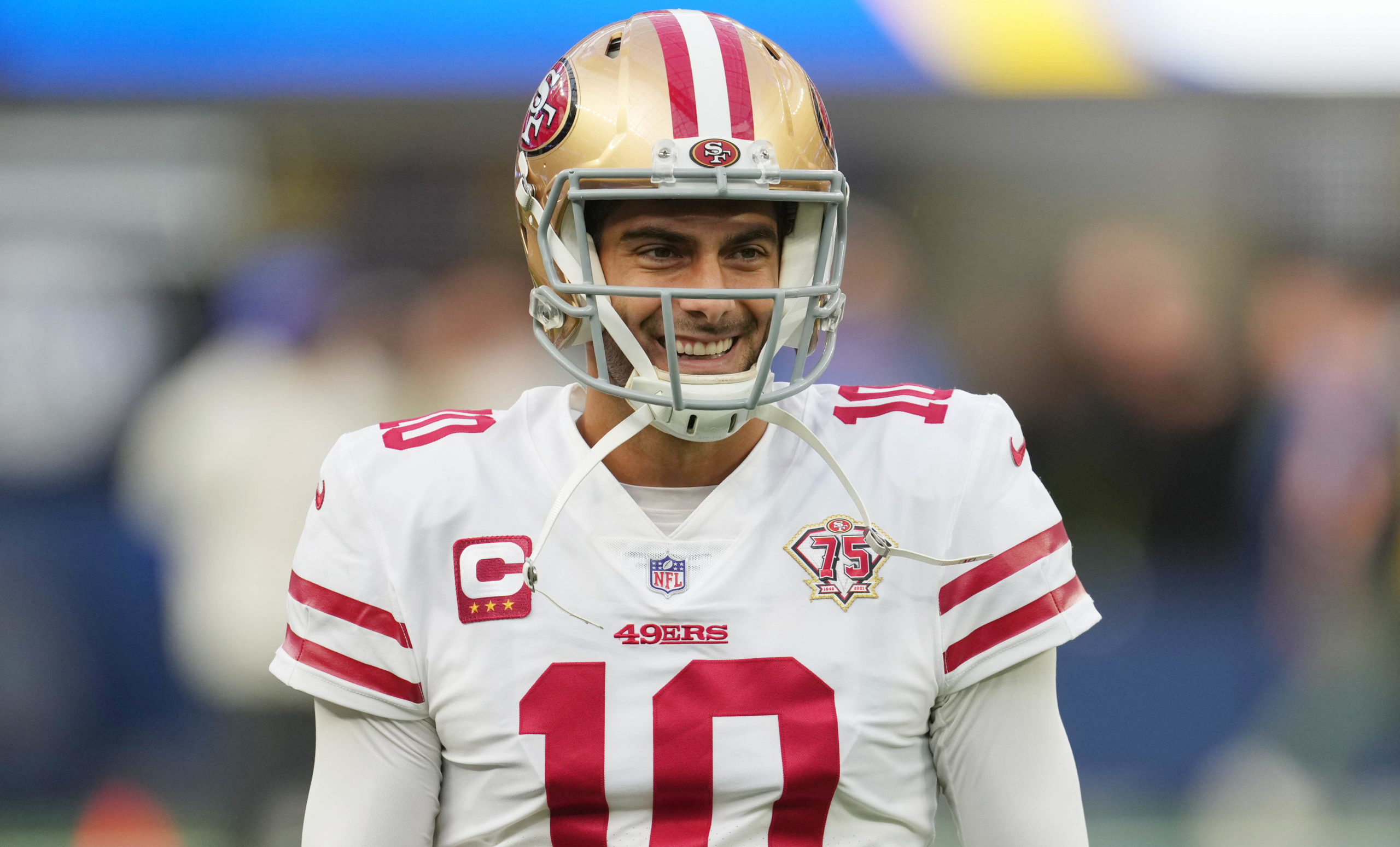 Let’s start by getting the easy part of this deal out of the way. By keeping Jimmy Garoppolo, the 49ers get added depth at the quarterback position (which was the biggest risk to the team’s success this season) and an affordable, top-of-market backup QB. Garoppolo’s restructured deal makes him the highest-paid backup in the league. […]

“Pretty interesting with everyone thinking he’s a lock to be out of there,” said Pagano, “but they must’ve built a heck of a relationship with this kid and he’s been an absolute pro. I think if that’s not the case, this goes a different way.

The San Francisco 49ers are making Jimmy Garoppolo the highest paid backup quarterback in the NFL as the two sides agreed to an incentive-laden, restructured deal on Monday that will keep the QB in San Francisco for another season.

According the multiple reports, the deal is structured such a way that Garoppolo is guaranteed a 2022 salary of $6.5 million and could max out at $15.45 million with incentives and per-game roster bonuses. This is a pay cut for the quarterback, who was due a salary of $24.2 million this season if he stayed on the team. But it’s a deal that should satisfy both sides.

“This sounds like a win-win and a sound decision at all levels,” said TJ McCreight, head of scouting for The 33rd Team. “Now, it is wait and see how (Trey) Lance plays. The big questions in my mind is — and only people within the building know this: What are the dynamics in having Garoppolo on the team?  Is Lance looking over his shoulder? What do their teammates think? These are questions that will play out over time. This will be fun to watch.”

Former NFL General Manager Rick Spielman agreed with McCreight. “if Trey Lance struggles and struggles through those first three or four or five games and those fans start chanting for Jimmy G, how does the team handle that? He [Jimmy] got them all the way to the NFC championship game last year. And if they do make the switch and put Jimmy G back in there, then what does that what does that do to Trey Lance and his confidence and how he’s going to move forward as well? It’s a great situation for Jimmy G. It puts San Francisco in a little bit of a predicament.”

These are all legitimate issues, perhaps none bigger than the effect this will have on Lance, who now is the leader of the team in only his second season. Having an accomplished veteran like Garoppolo behind him could potentially have him watching over his shoulder.

However, the way the deal is structured, the line of demarcation between starter and backup is clearly stated. There should be no confusion now.

“(Garoppolo) won’t play unless Lance gets hurt,” said Joe Banner, former NFL executive and co-founder of The 33rd Team. “It’s a true backup deal and they are totally committed to Lance.”

Jimmy G is staying in The Bay Area 🤯

The new deal is for one year that contains both a no-trade and no-tag clause, NFL Media reported. The quarterback will have the option to leave San Francisco next season.

“From the 49ers’ perspective, they get to keep Garoppolo at a reduced number and have a top level backup with a team that is ready to win right now,” McCreight said. “From Garoppolo’s perspective, I would think he believes he can take the job from Lance, get on the field and play well on a team that he knows very well. If Garoppolo’s objective is to maximize his earning potential and choose his team next offseason, this would allow him to do that.”

The 33rd Team’s Brett Favre said last week that the 49ers would be crazy not to keep Garoppolo on the roster this season, whether he was the starter (Favre’s preference) or Lance’s backup.

“Cutting him or letting him go or asking him to take a pay cut, to me, is absolutely crazy,” Favre said.

Editor’s note: It’s been almost a month since the 49ers officially named Trey Lance their starter for the 2022 season, but that didn’t stop former NFL MVP Brett Favre from questioning the decision. On Monday, Favre was asked who he’d go within San Francisco, the second-year Lance or veteran Jimmy Garoppolo, who has a 33-14 record as an NFL starter with two NFC championship appearances and a Super Bowl.

I have not watched much tape on [Trey Lance], but I’ll say this, the kid’s got a lot of talent, [but] very little experience.

My personal opinion, I would go with Jimmy Garoppolo. He’s not as flashy, not near as flashy. He wasn’t their first-round pick. And no offense toward Trey Lance, but what Jimmy has done is win and win, win, win again. Not flashy.

So, it’s not the glamorous pick, but my goodness, the guy has won and put the 49ers in a position to compete for the Super Bowl year in and year out and deserves the right to keep playing.

Now, who knows? He may end up at some point starting if Trey gets hurt or underperforms, and if you have to bring in Jimmy Garoppolo, that’s a good thing.

But their defense is really good. Barring injury, offensively, if Trey plays the way they hope he is capable of, then they’re competing for [a championship] right there at the end. There’s a tremendous upside with Trey; no question about it. But Jimmy G. has been a proven winner. And that oftentimes gets overlooked — is a guy a winner? And Jimmy Garoppolo is definitely a winner. The opportunity to trade Jimmy Garoppolo might never get better than right now. After the San Francisco 49ers traded three first-round picks to move up and select quarterback Trey Lance in the 2021 NFL draft, the clock started on Garoppolo’s time with the team. After nearly leading the 49ers back to the Super Bowl, Garoppolo had […]

The San Francisco 49ers are at a standstill when it comes to Jimmy Garoppolo. They have gone all in on second-year quarterback Trey Lance but have yet to make a move regarding Garoppolo. Despite listening to trade offers all offseason, he remains on the roster. A new wrinkle was added to the fold today. Rob […] The 49ers are no longer Jimmy Garoppolo’s team. Kyle Shanahan made it clear during a press conference yesterday, that they are moving on to Trey Lance. Shanahan’s words raise the question that has been brought up consistently since the end of last season’s NFC Championship Game: What now for Garoppolo? Garoppolo has seen his options continue […]

This time of year, teams have completed their draft selections and are looking toward their mini-camp and training camp rosters. The new rookies who have something to prove sometimes overtake the veteran players who are already on the fringe of the roster. Other times teams are looking to go in a new direction with their […] With the draft coming and going, teams have mostly filled out their rosters with the exception of a few slots dedicated to undrafted free agents, any veterans who remain from the early parts of free agency, and/or any players who are on the move via trade. Names like Jarvis Landry and Baker Mayfield among others […] The Browns and 49ers find themselves in limbo with the two most viable starting QBs available in the NFL market. They’ve arrived here coming from the opposite ends of the spectrum and will have two completely different approaches to how they approach the relationship and moves to make when it comes to their respective QBs. […]