This is a 1st and 10 call from the 25 in the 2nd quarter of last week’s game between the Bills and Dolphins. The Bills come out in a 2×2 set with 4 wideouts spread across the field. The defense is in a basic 42 look with a safety in the middle of the field. You can see the receiver on the bottom releasing a go route, the receiver at the top releasing on a vertical hitch route at 10 yards, and the two inside guys running seam routes. The back is blocking, checking his protection, and then getting over the ball.

When you look at the tackles, you see them in 3 point stances because it’s a 1st down call that compliments the run game.

The back is normally to the side that he protects and the line will go away. Each week offenses change their protections so defenses won’t key in. If a base protection rule is used here, Morse would go to right and running back would have the linebacker. If they start doing this on a consistent level, defenses will start bringing the linebacker to occupy the running back.

It’s a great job set by center and left guard as they’re hip to hip, the RG is doing a good job on the DT, and the RT had the defensive end locked up. 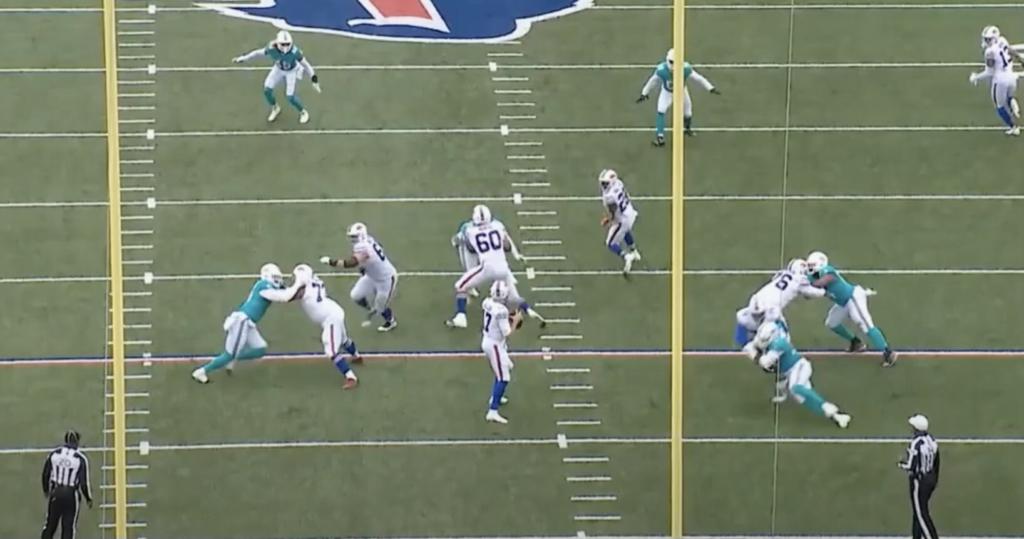 Morse sets left, the protection is set hip to hip on the backside, and you can see Singletary cross protect while eyeballing the linebacker on the other side of the formation prior to releasing into the route.

Watch Josh Allen on the drop and the stripe of his helmet looking to the right. He not only does that, but he points with his left hand to occupy the linebacker and the safety in the middle of the field. He then comes back on the drop, steps up, and is able to make throw with his arm talent. I’d give him a plus for the read, plus for the progression, but a minus on the location of the throw because it stops Beasley’s momentum.

One thing to point out is that the left guard leaves Morse to get a kill shot on the LT blocking the defensive end. I think he leaves too early and now puts Morse in a position where he has to block man-to-man on the most dangerous defender of the protection.

If this was 3 deep man-to-man, Allen would be working the receiver on the outside in bump n run on the go route, then at the top of the screen in the hitch route. If it was a shell look, Allen would be working to Cole Beasley bending inside underneath the two safeties if they happened to play cover 2. And then he’d be checking it down to Singletary. You have a cover 3 zone play, a cover 3 man play, a shell beater with a bender, and against the blitz Allen could take a quick 3-step drop and plug the hitch route to the outside.