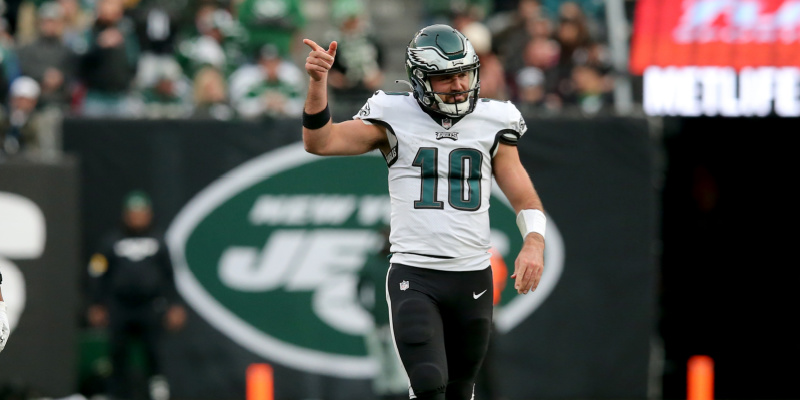 The Eagles acquired Gardner Minshew for a conditional sixth-round pick in August. The pick could rise to a fifth-rounder if Minshew is involved in 50% of the team’s plays in three games this season.

At the time of the trade, it was reasonable to assume this would have been for a pick in the middle of the sixth round, and it will still likely be a mid-sixth round pick. Though Minshew played well in Week 13, it would be surprising if he played in 50% of three games.

This was a much bigger and more meaningful acquisition than most realized. Even in August, this was obviously a strong move for Philly and a poor deal by Jacksonville:

Surprised Jags couldn’t get more. Not sure if it wasn’t there or they just didn’t find it.

I don’t know whether the Eagles or Jaguars initiated the trade conversation, but you have to give a lot of credit to Philadelphia. Minshew playing well (albeit against a weak Jets team) only confirmed what was clear all along: the Eagles fleeced Jacksonville. Here’s why…

Gardner Minshew is the best-in-class backup quarterback. If you gave me the choice of any backup QB in the league, I would choose Minshew. Out of all the options, I think he gives you the best chance to win. Even as a starter, he has proven to be able to have reasonable success with a weak surrounding cast.

In a similar trade, the Jets traded a conditional sixth-round pick to the Eagles to acquire backup QB Joe Flacco. The difference between Minshew and Flacco, however, is that Minshew does not just fill the backup role; he can actually win games. Flacco, on the other hand, can fill the backup role, but he’s not going to go out and win you any games.

Minshew is playing on one of the most team-friendly deals in the NFL. He will account for $850,000 against the cap this season, then $965,000 next season. According to Over the Cap, Minshew is the 88th highest paid QB in the NFL based on APY for the total contract ($677,904). When looking only at the average salary for this season and next, Minshew’s APY is $907,500, which is tied with Trace McSorley for the 70th highest paid QB.

Even if you don’t agree that he’s the best backup QB in the NFL, the average backup QB in the league makes $2.5 million per year. Minshew’s value to Jacksonville was far greater than a pick in the middle of the sixth round, especially when you factor in his contract.

Although it is not rampant, there are teams that have used second or third round draft picks on backup QBs. In fact, the Jaguars didn’t even study the history of the team they traded with. The Eagles drafted Jalen Hurts in the second-round in 2020, indicating the value they place on their backup. They also traded Wentz for what will end up being a first-round pick, which demonstrates the value they place on a starting QB.

There were other explanations, but the Eagles drafted Hurts to be the backup. They didn’t want to bet their whole season on Wentz staying healthy. They wanted to have somebody who could come in and have a chance to win if Wentz missed time due to injury. This is similar to the role Nick Foles played for them.

Draft picks aren’t always valued consistently; a team used a second-round pick on a kicker in 2016 and a few years later they won the Super Bowl without his help. Even so, it’s unfathomable to think that there wasn’t a team in the league willing to beat Philly’s offer for Minshew. But if this was actually the best offer Jacksonville received, there is no logical reason as to why they wouldn’t have kept him on their roster.

One argument made in defense of Jacksonville’s trade is that Minshew was disgruntled about Trevor Lawrence starting over him. Even if this was this was the case, there’s a substantial difference between being disgruntled and being so disgruntled that you’re taking actions to force yourself off the team. The latter was not the case, and Philadelphia wasn’t the place to send him if the former were true.

The only reason for a team not to trade for Minshew is if they are rebuilding and trying to maximize their draft capital. It doesn’t make sense to part with an asset when you are not competitive, as you need every single resource at your disposal. This is exactly the mistake that the Jets made when trading for Flacco.

Most teams are merely looking to check a box for having a backup QB, so they don’t have to worry about it. The Eagles didn’t do that, and they deserve credit for looking at any and every opportunity to get better. It seems as though every team was sleeping when the trade occurred in August, allowing the Eagles to get the NFL’s best backup QB for next-to-nothing in terms of both money and draft capital.