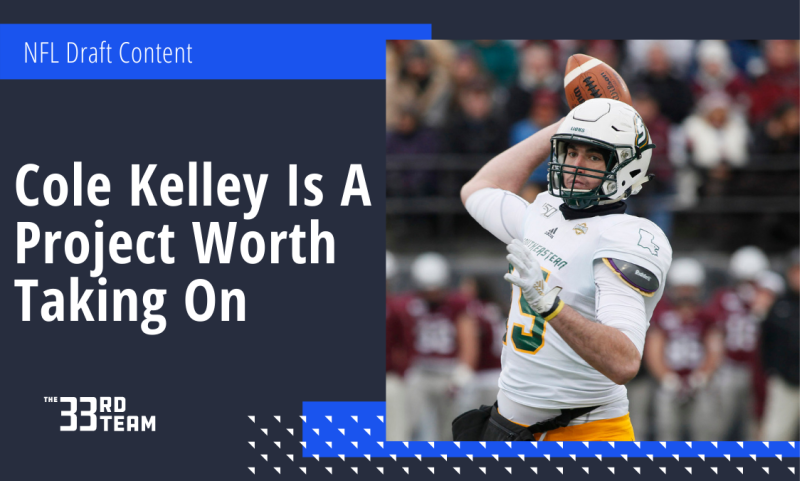 A player who surprisingly does not have more buzz surrounding him is Southeastern Louisiana quarterback, Cole Kelley. The former 4-star recruit from Louisiana played poorly at Arkansas and ultimately found himself as the scout team tight end. Kelley struggled with turnovers, accuracy, and wasn’t inspiring enough to keep the job for the full season. In his final start at Arkansas, he threw 4 interceptions and completed 45.7% of his passes in a home loss to North Texas.

Standing at 6-foot-7 and 248 pounds, Kelley’s physical tools alone should have him on more radars. The FCS All-American and former Walter Payton Award winner is coming off a season in which he put up the second most passing yards of any quarterback in the country (including FBS) with 5,124 yards and 44 touchdowns, which was right behind Eric Barriere for the FCS lead.

Even more impressive with Kelley is his ability as a rusher for his size. For a guy as big as him, he moves more fluidly than others his size and is a legit threat to extend plays and can be utilized effectively by the goal line. He ran for 491 yards this season and added 16 touchdowns, all of which came in the red zone.

What makes Kelley interesting is that while he has gunslinger tendencies, he also shows flashes of being precise with an 81.6% adjusted completion percentage, highest in the class, and a turnover worthy play rate of just 2.3%. He’s also a good thrower down the field with the highest adjusted completion percentage on throws over 20 yards in the class and is the only QB this year to not have thrown a single interception on these throws. While he could stand to get more consistent in this area, he has all the talent to be able to do so. When under pressure, Kelley had a decent passing grade of 66.8 which would’ve been higher than both Justin Fields and Trevor Lawrence had he declared last year.

Overall, Cole Kelley has a very interesting profile with his size, athleticism, and former 4-star pedigree. Things didn’t work out for him at Arkansas, but the way he’s been able to rebound at Southeastern Louisiana says a lot. He’s got a strong arm with the ability to make throws to every level of the field, but there are definitely some areas of his game that need to be cleaned up.

With an elongated release, quicker NFL cornerbacks will be able to get an easy read on where he is going with the ball and be able to jump Kelley’s passes early on. Despite that, the physical skill set and production he’s put up the past two years would be worth taking a chance on in the later rounds. His performance in the NFLPA Event could big of great magnitude.