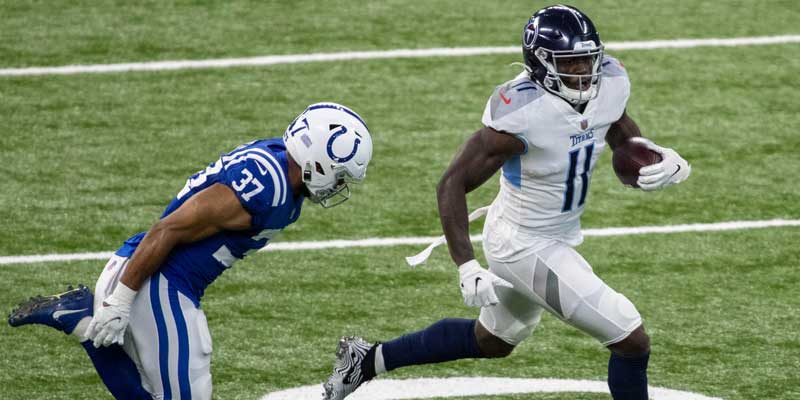 After scanning the game reports, here are some observations on key Week 12 NFL games:

After both teams opened with two touchdowns, Indy punted three straight times while the Titans added three more scores to take a 21-point halftime lead. Tennessee’s offense was clicking on all cylinders. Derrick Henry averaged over eight yards a carry in the first half with 3 TDs. On first down, he had over 100 yards on only 13 carries. Ryan Tannehill was efficient, completing 60% of his passes for over 11 yards per attempt. Tennessee is again proving it is built to win in December. On their two drives in the first quarter, they passed on nearly 60% of first downs, leading to a 57% success rate. In the second quarter, they ran on 80% of first downs, leading to a 80% success rate. This is only the third game this year in which Indy has not forced a turnover on defense; two of them have come against the Titans.

The Colts offense ran on 57% of first downs in the first half, despite only averaging 3 yards a carry. Philip Rivers was 11-for-17 and averaged 7.5 net yards per attempt. After two 75-yard TD drives, they only had 11 yards on their next three drives.

New England was able to keep Arizona’s offense in check, holding the Cardinals to under 20 points for the first time all year. After scoring the opening touchdown off a Cam Newton interception, the Cardinals managed just 3 points the rest of the half. Kyler Murray did average over 6 net yards per attempt but the Cardinals only averaged 3 yards a rush before halftime. For the first time all year, Murray had no first-half rushing yards. The Cardinals still ran on 69% of first downs, leading to a 31% success rate. Arizona did have an opportunity to extend their 10-7 halftime lead but were stopped on fourth-and-goal as the half ended.

For the game, Newton averaged under 4 net yards per attempt and threw two interceptions. New England’s rushing game was also minimized for much of the game, averaging only 3.7 yards per carry. With the game tied at 17 in the fourth quarter, Newton threw an interception, setting up the Cardinals for a go-head 45-yard field goal opportunity that sailed wide right. On their ensuing drive, Cardinals rookie Isaiah Simmons committed an unnecessary roughness on Newton that allowed Nick Folk to win the game on a 50-yard field goal as time expired.

The Rams offense was stagnant for much of the game against San Fran. They managed just three first-half points while committing three turnovers. They only averaged 2.4 yards per carry despite running on 16 of 33 first-half plays. On their first drive of the second half, Jared Goff was intercepted by Javon Kinlaw, who returned it 26 yards to give the Niners a 14-3 lead. After a Rams field goal, Aaron Donald got L.A. back in the game on a forced fumble that Troy Hill returned for a TD. With the game tied late in the fourth, the 49ers converted on two third downs and a fourth down to kick a game-winning field goal. The Rams punted seven times and committed four turnovers.

Outside of an early interception, QB Nick Mullens was good for the Niners. He completed nearly 70% of his passes and averaged over 6 yards an attempt, and led his team on an 11-play, 56-yard drive that set them up for the game-winning kick. On arguably the play of the game, Mullens connected with Deebo Samuel on a short slant that went for 24 yards on fourth down. Samuel, who was playing in his first game since Week 7 (hamstring), had 133 yards on 11 catches.

Aaron Rodgers and the Packers led start to finish in Chicago. They scored touchdowns on their three first-half possessions and added a fumble return for a TD to take a 27-10 lead. In the first half, Rodgers completed 83% of his passes for over 7 yards an attempt with 3 touchdowns. The Packers passed on 56% of first downs leading to a 56% success rate in the first 30 minutes. For the game, the Packers were 9-for-14 on third or fourth down. Rodgers was 8-for-9 with 81 yards in that span.