Football teams at every level have different names for plays, blitzes and stunts throughout their schemes on both sides of the ball. Coverages typically have universal names throughout the game. The designation of basic coverages is determined by whether it is primarily zone or man coverage, followed by the number of deep coverage defenders. It is important to understand that certain coverages are meant to take away specific routes an offense runs, and no single call will account for everything. This article will go through the teachings of a cover 1 defense and explain the details of it.

Why is it Called Cover 1?

This basic question is important when categorizing and defining each coverage. Coverages generally get their names from the number of defensive backs covering the 3rd level of the field. In this instance it is referred to as a cover 1 defense due to the single high safety alone as a deep defender in the middle of the field. These alignments can be cheated over to a hash due to a trips or quads formation call from the offense, but are typically seen as a deep middle defender. When diagnosing coverages it is important to recognize if the middle of the field is open or closed to determine the safeties’ responsibilities.

Now that we know how cover 1 gets its name, it is important to understand whether it is primarily zone or man coverage. A Cover 1 call tells the defense that it is man coverage across the board with a specifically assigned player underneath taking away the intermediate to short middle of the field. Whether it is a “robber” or “hole” call can change who is the underneath zone defender in cover 1 looks.

A robber call specifies that the strong safety is assigned underneath zone coverage. This type of coverage allows defenses to disguise it with a cover 2 shell pre-snap. Once the play starts the safeties high-low the middle of the field with the strong safety jumping underneath to help take away any intermediate crossing routes. This is typically used as a way to confuse quarterbacks pre-snap and get a physical coverage player into traffic. 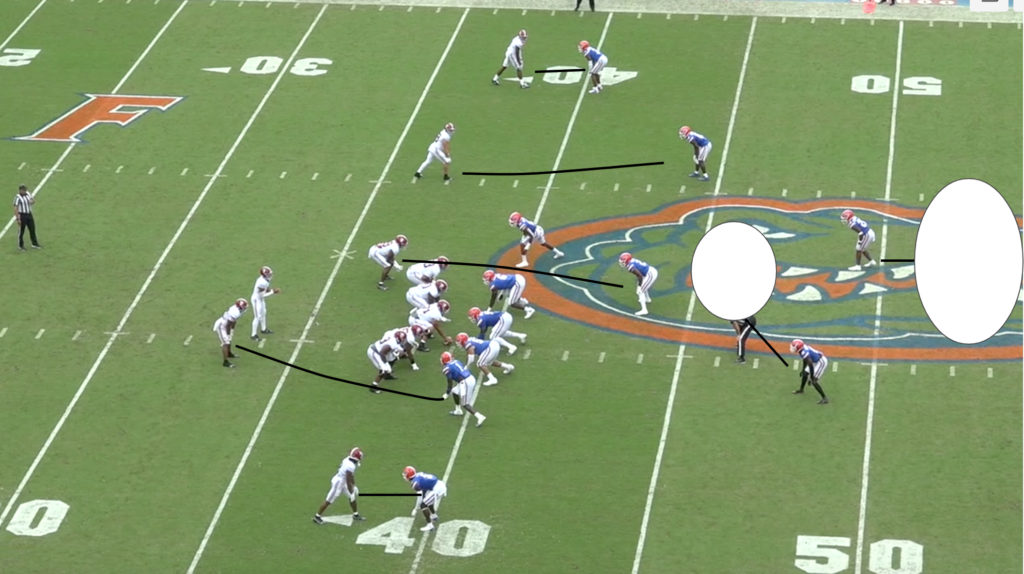 A hole call is primarily used against heavier offensive sets with multiple tight ends or backs on the field. This allows the strong safety to initially line up in the box or slot to man up on the extra non-receiver. This leaves the underneath zone assignment to the interior linebacker looking to take away any immediate routes over the middle of the field. This specific call allows defenses to load the box more against heavier offensive packages, or matches up athletic safeties on tight ends in space. The players in man coverage are aligned with outside leverage in either press or off-man depth from their assigned receiver. Outside leverage is described as lining up with your inside foot down the middle of the other player’s chest. This leverage is used to take away all outside breaking routes to funnel all action towards the middle zone defenders inside the numbers.

Assignments are generated through matchups and offensive/defensive personnel packages. Cornerbacks are almost always assigned to the outside receiver on their side of the field. Safeties are typically matched up with tight ends or slot receivers depending on their package. If there is a nickel corner on the field, they are assigned the responsibility of manning up slot receivers. Linebacker assignments can change if there is more than one tight end or back on the field. Primarily these assignments are divided up between the sam and will backers based on their coverage abilities. Assignments can change with personnel packages and talent on the field, although commonly the basic rules stay the same in cover 1.

Which NFL Teams Use Cover 1 the Most?

Teams whose secondary have the athleticism and agility to cover in man-to-man use cover 1 as one of their base coverages. The top 3 teams that have the most amount of snaps in this coverage are the Dolphins, Cowboys and Patriots. These teams run a cover 1 defense 32.6%, 34.7% and 33.2% of the time, respectively. All of these teams have highly athletic cornerbacks who they have acquired through the draft or free agency. Their commitment to loading up their secondary with talent allows them to play this coverage effectively. Each of these teams rank in the top 11 of the league in points allowed per game this season. Cover 1 is overall a simpler coverage in comparison to others, and yet still is highly effective at the professional level.

Britton Mann contributed to this story