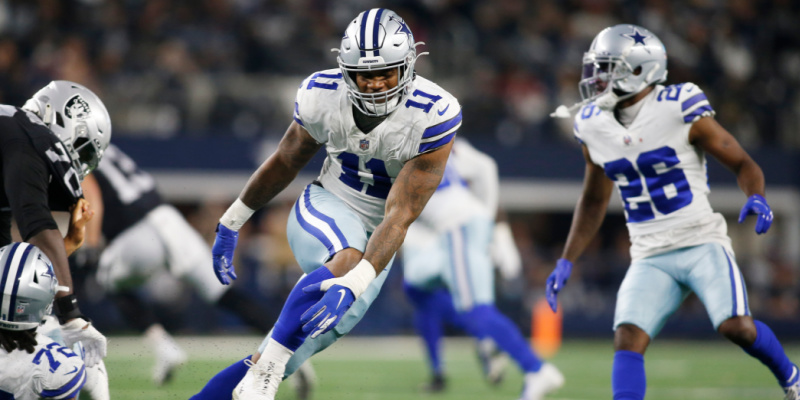 The 2021 Draft was somewhat anomalous in that there wasn’t a defensive player selected in the top 5 for the first time since 2012. That year, CB Morris Claiborne was the first defender off the board when he was selected by Dallas with the sixth pick. In 2021, Carolina broke the streak of seven consecutive offensive selections by picking CB Jaycee Horn.

Due to the focus on offense at the top of the draft, teams benefited from defensive players falling, and perhaps no team has reaped a greater reward than the Dallas Cowboys. Despite Micah Parsons being considered by many to be the best defensive player in the draft class, the Cowboys were able to trade back from the tenth pick to twelve and still select him.

It’s hard to believe, but over 75 percent of the regular season will be in the rearview mirror after this week. With that in mind, it’s a great time to look at Parsons and some other impressive rookies on the defensive side of the ball. Let’s break down why Parsons has had a standout 2021 campaign and what we can learn from his performance along with the others.

Parsons is not only the favorite for Defensive Rookie of the Year; he’s also in the discussion for Defensive Player of the Year. The Penn Stater leads the NFL in pressure rate (21.3%) by over two percent (Maxx Crosby is second, 18.9%). He’s accumulated 10 sacks along with 72 tackles, which gives him 12 more tackles than any other player with double-digit sacks. After opting out of the 2020 CFB Season, Parsons was expected to be utilized primarily as an off-ball linebacker in the NFL. Only 11.7% of his snaps came as a pass rusher during his last season in Happy Valley. Yet, injuries to Demarcus Lawrence and others on the Cowboys’ D-Line served as the catalyst for Parsons’ transition to the edge.

It’s obvious that this position change has been successful. Parsons has thrived as a pass rusher. The real question, however, is what has enabled Parsons to exceed lofty expectations?

Much of the answer resides in his physical traits, athleticism, and versatility. Parsons is extremely twitchy and athletic. He has elite height/weight/speed/flexibility in addition to being relentless in his pursuit of the quarterback. He is one of quickest players off the ball you’ll find with an explosive first step and extraordinary closing speed. Parsons ran a blazing 4.39 40-yard dash, and although the 40 isn’t always indicative of play speed, it has been emblematic for Parsons.

As for versatility, Parsons flashed his ability to rush the passer in college, but he shined as a run defender. He was PFF’s highest graded run defender (94.8) in the 2019 college football season, accumulating 109 total tackles. Parsons’ elite physical attributes and above average instincts allowed him to play downhill and roam all parts of the field for Penn State. In addition to his pass rushing and run defense abilities, Parsons is capable of matching up with Tight Ends and Running Backs in coverage.

Parsons is the first Cowboys rookie ever to reach double-digit sacks. DeMarcus Ware previously held the franchise record for a rookie with 8 sacks in 2005. Yet, Parsons isn’t just setting franchise records; his sights are set on NFL rookie records. Titans DE Jevon Kearse holds the NFL record for most sacks by a rookie with 14.5 in 1999. Parsons is slightly behind Kearse’s pace, but he has 7.5 sacks in his last five games and will be aided by the 17th regular season game.

Micah Parsons also compares favorably to some of the most recent top rookie edge rushers. Through 13 games, he has the highest pressure rate among rookies since 2010 and the second most sacks; only Von Miller had more with 10.5. In addition to Micah Parsons, here are some other rookie defensive players who have exceeded expectations:

Patrick Surtain: There was much discussion about whether Denver should have selected Surtain or a QB with the ninth overall pick. Surtain’s performance hasn’t disappointed, serving as defense of his selection in the process. It’s also particularly important to have a strong secondary in the AFC West where you face Mahomes and Herbert each twice a year. Surtain has 4 INT on the season, including a pick-six.

Odafe Oweh: Oweh didn’t record a sack during the 2020 season at Penn State, but he already has 5 in the NFL. To add to that, he has forced 3 fumbles as a Raven. Oweh demonstrates the value of athleticism and physical traits over production in college. For edge rushers specifically, sacks may not be as important as other factors in draft projections.

Jevon Holland: Holland impressed in the draft process as a hybrid safety who could excel in different defensive game plans. His quickness and twitch make him a threat to blitz off the edge. He has solid man coverage ability, along with fluid enough hips to play a middle deep safety. Holland is currently PFF’s 7th highest graded safety (min 200 snaps).

Physical traits, athleticism, and versatility are all paramount for defenders to successfully make the transition from college to the NFL. Parsons exemplifies this. There are few players, if any, who can match his ability to pass rush, defend the run, and cover.

Micah Parsons’ success could also impact how teams conceptualize position changes from college to the NFL. He has seamlessly and successfully moved from an off-ball LB to an edge rusher. Other teams will have to determine whether Parsons’ position change is an exception to the rule. Moving forward, Dallas will have the luxury of choosing whether to capitalize on his versatility or maximize his ability as a pass rusher.