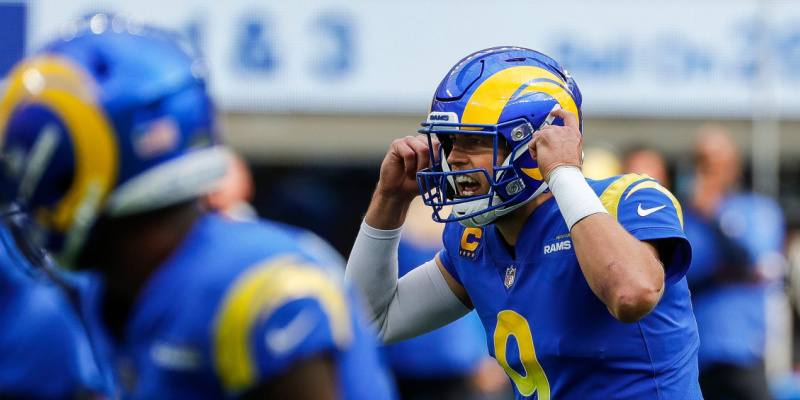 This play is a great example of why professional football is the greatest game going and why the 40 seconds from whistle to snap truly matter.

The Rams are lined up in an empty set with a bunch to the left and Darrell Henderson on the bottom of the screen outside of Jefferson. On the defensive side, the Lions are in 4-down with 2 linebackers in a double-A look and five defensive backs. As Stafford looks at the front, he begins to gather information. First, there’s 6 up and there’s five back. Stafford knows he has 5 to block and 6 defenders on or near the line of scrimmage. This alerts him that if he allows the play to be run there’s the potential of one of these 6 players coming free forcing him to throw the ball quickly. That’s a +1 alert for Stafford and in his mind, he’s got to be ready to find a quick answer if he takes the snap at this time.

Stafford brings Henderson back into the backfield and now his math looks pretty good. He’s got 6 to block the 6 defenders on the line of scrimmage. He also knows that with 6 up and 5 deep, there’s still potential for man-to-man coverage on the outside knowing that If Henderson blocks, it’s going to free up #21 (who was assigned to the RB) to help.

There’s also a lot of communication on both sides of the ball before the snap. Let’s start at the top of the screen with the Lions defense. As this bunch unfolds, you see the point player at the top communicating with the #3 defenders inside covering the bunch.

You also see the point player turn and point to the outside defender in the bunch.

Finally, you see the two backers in the line of scrimmage pointing, communicating the defensive call to the players around them. If you’re an offensive coordinator, you’d get the win. Anytime you can get the defense to point more than four times, I personally call it the 4-point rule, you’ve achieved what you wanted relative to the formation (to force multiple acts of communication).  When you’ve forced the defense to audible, to change what they were doing or even confirm what they’re doing, but they have to communicate it via hand signal and by voice. This ultimately can lead to mistakes.

There’s also communication on the offensive side of the ball. Before Darrell Henderson has come into the backfield, Stafford sees that he’s got 2 defensive tackles, 2 defensive ends one down, one stand up, and two linebackers in the A-gaps (the area between the center and the guards on each side).

Stafford knows that if he is going to run this play from empty, He would have to release the ball immediately (the quick answer). Stafford wants nothing to do with that. He wants to run this play on 3rd and 6 so he can get the ball up the field enough to get the 1st down. He brings Henderson back into the formation (to enable a 6 man protection) and you can see Stafford hold his cadence to allow time for the guards and tackles to communicate and for center Bryan Allen to make sure everyone has the call.

When Henderson moves up into the line of scrimmage, he’is giving the 2 inside backersJalen Reeves-Maybin and Alex Anzalone the “answer to the test” that he’s blocking Maybin and Brian Allen is blocking Anzalone. With that, the A-gap players on defense audible to either confirm the blitz or change it to maximize its effectiveness.

Anzalone is blocking Brian Allen to allow one of the two inside A-gap players to come free.

Henderson is doing a great job of delivering the linebacker to Brian Allen and then coming off on his backer.

But the pick stunt works so well that Reeves-Maybin comes free. The Rams block it exactly like they want with the two guys inside taking on the blitz, but the Lions ultimately win on the pick stunt. Prior to the snap we see Henderson coming in, Jefferson moving out, and the bunch secured with Higbee at the point, Woods outside and Kupp inside.

Watch what happens on the back end at the release of the bunch. There is a mixup by the defenders covering the bunch with 2 defenders covering Higbee and Woods getting cut loose on the shallow cross making it very difficult for the freed up safety to cover Woods from that depth and width.

On this play you’ve got Woods running the shallow cross, Kupp is #2 in this progression running the angle route, and on the back side if it was bump and run 1 on 1 with the free safety in the middle,you’ve got Jefferson who’d be running the go route versus the defender on his side.

As Stafford takes the snap, he’s got a quiet area to deliver the ball while he’s gaining ground. He’s able to slide left in the pocket, set his feet and deliver the ball to Woods on rhythm allowing him to make the first guy miss and then finishing with an explosive conversion.

With all that being said, we need to focus our eyes on the greatness of Matthew Stafford and how he plays this out. With everything going on, Stafford’s looking to throw the ball to Woods,he never takes his eyes off of Woods. With a rusher in his face,. he’s able to slide quietly  to his left in the pocket, he creates space for Woods and a lane to throw this ball knowing he’s going to take the hit. Take a close look at Stafford’s delivery and the awkwardness of the throw. His elbow is way below his shoulder. That’s why in Detroit Matthew Stafford was one of the top 5 quarterbacks in the league and now he’s in position to be the best quarterback in the league.

This is a great look all around on what it takes communication wise prior to the snap, what happens at the snap, what started earlier in the week by game planning protection, coordination, and showing the inner connection that all 22 players have before the snap of the football. Great looking play and why we all love the game.