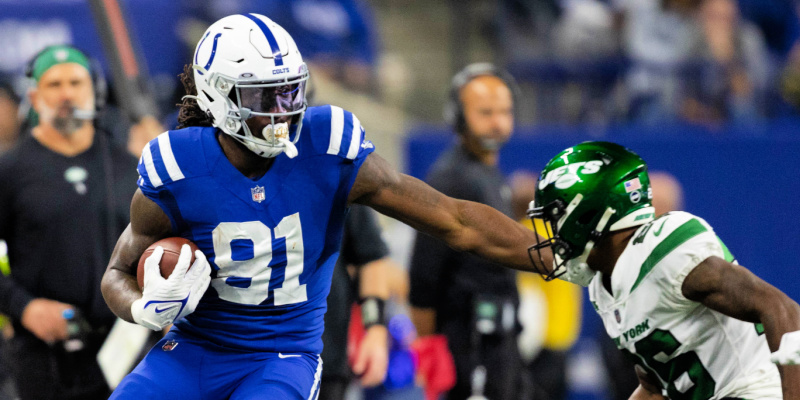 After losing to the Raiders and Jaguars in the last two weeks of the season, the Colts missed the playoffs in 2021. It’s easy to harp on this collapse and their stunning 26-11 loss to Jacksonville, but the Colts followed up a 1-4 start with an 8-2 run to put themselves back in playoff contention. Along the way, they racked up quality wins against the Bills, 49ers, Patriots, and Cardinals. Indy also had seven Pro Bowlers: DT DeForest Buckner, C Ryan Kelly, LB Darius Leonard, CB Kenny Moore II, LG Quenton Nelson, LS Luke Rhodes, and RB Jonathan Taylor. Unfortunately, they were the first team with seven Pro Bowlers to miss the playoffs.

As part of the deal, Washington agreed to pay all of the $28M Wentz is owed in 2022. The result is that the Colts now have the most Cap Space in 2022 with $69.8M. Given all that cap space, here’s the outlook for the Colts heading into Free Agency…

In addition to Wentz, who played 98% of Indy’s snaps in 2021, Fisher, Pascal, Glowinski, Muhammad, Rhodes, Sendejo, and Alie-Cox all played over 50% of the team’s snaps last season. The Colts will either need to re-sign their UFAs or bring in new starters at QB, WR 2/3, RG, TE, DE, and CB. With nearly $70M in cap available, the Colts will have options in terms of filling out their roster.

Unsurprisingly, the Colts did not elect to use the Franchise Tag or Transition Tag this offseason. They didn’t have any realistic candidates to be franchised, and they haven’t used the tag since Chris Ballard became the team’s GM in 2017.

Of course, the top need is QB following the Wentz trade yesterday. The Colts now must turn to the free agent market, trade market, or draft to find their next signal caller. Jameis Winston and Teddy Bridgewater are the best UFA options. Deshaun Watson and Jimmy G should be available via trade, but the former is unlikely for multiple reasons. As for the draft, that also doesn’t seem promising due to the lack of QB talent there and the Colts lack of a first round pick.

Currently, Sam Ehlinger and James Morgan are the only QBs on the roster. While we don’t know yet who the Colts QB will be, we do know that they will have a new opening day starting quarterback for the sixth straight season.

Focusing on the other needs, Adam Schefter recently reported that the Colts do not plan to bring back veteran LT Eric Fisher, making that an immediate and potentially costly need to fill. Aside from Michael Pittman, the Colts will need to bolster their WR room with Pascal and Hilton hitting free agency. Though they have the money to spend on an elite WR, both Davante Adams and Chris Godwin were given the franchise tag. Mike Williams was also signed to a three year extension for $20M APY. Lastly, with Al-Quadin Muhammad becoming a free agent, they will need an EDGE to play opposite 2021 first-round pick Kwity Paye.