Many teams would be willing to break the bank to keep two shutdown corners on their roster – after starting the 2021 season with the duo of former DPOY Stephon Gilmore and All-Pro J.C. Jackson, the New England Patriots enter the 2022 season with neither.

An undrafted free agent in 2018, Jackson signed a three-year $1.72 million contract. He played the 2021 season on a one-year second-round restricted free agent tender worth $3.38 million. Without agreeing to extension terms throughout the season, the $17.3 million franchise tag was the next option; the Patriots declined to use it.

Long-term extension or one-year tag, Jackson would go from one of the most team-friendly deals in the NFL to one of the highest-paid cornerbacks on the market. On the first day of legal tampering, Jackson signed an $82.5 million contract with $40 million guaranteed to join the Los Angeles Chargers.

While it may be hard to predict what exact move the Patriots will make next, history tells you it will be economical. Going back ten years, they sent a 4th round pick to the Buccaneers at the trade deadline for Aqib Talib and a 7th. After half a season in 2012, the Patriots signed Talib to conservative a one-year $5 million deal in 2013; Talib was a 2nd-Team All-Pro.

While Talib signed a massive six-year deal worth $57 million with $26 million in guarantees the following season, the Patriots signed Darrelle Revis to a shorter two-year, $32 million contract with $11.5 in guarantees. Revis was a 1st-Team All-Pro in 2014. The Patriots opted not to pick up his option the next season, saving them $20 million.

In 2017, the Patriots signed Stephon Gilmore to a five-year $65 million contract. While significant, the agreement accounted for just 7.8% of the salary cap at signing, a smaller percentage than Trumaine Johnson, Xavier Rhodes, Desmond Trufant, A.J. Bouye signed for that same offseason, according to Over the Cap.

When considering why The Patriots may not value Jackson similarly to their No. 1 corners of the past, their change in defensive philosophy could tell the story.

After seven weeks of deploying Jackson in man coverage more than 50% of their coverage snaps, he played 50% of snaps in man coverage just twice for the remaining 10 games of the regular season. With this change, perhaps Bill Belicheck questions if paying Jackson, who’s valued as an elite man corner, is worth it in a more zone-heavy scheme. 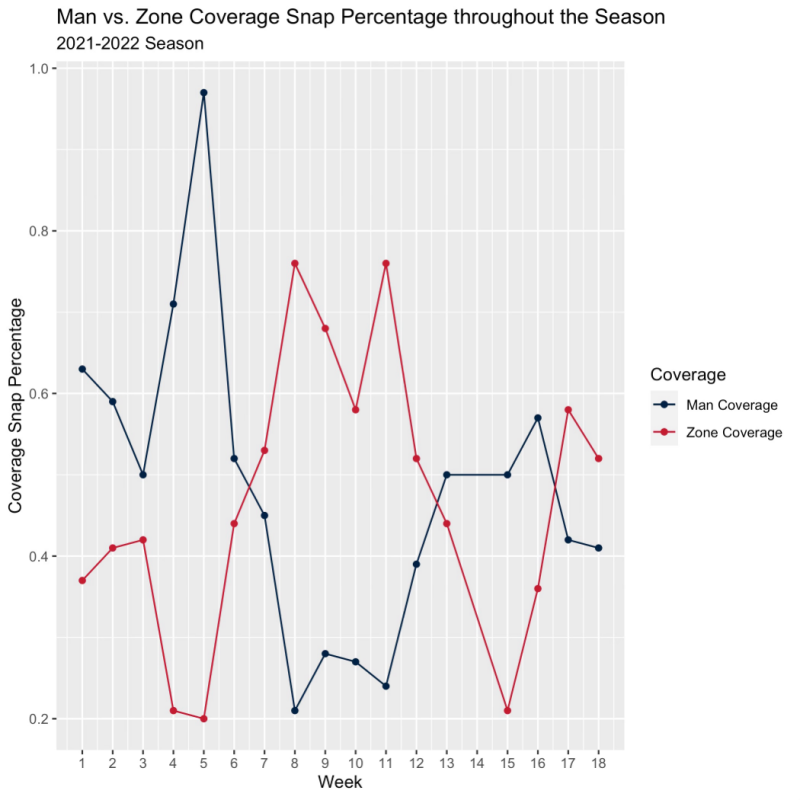 Without Jackson, the Patriots have just Jalen Mills, Joejuan Williams, Myles Bryant, and Shaun Wade at outside corner on the roster. With Jackson and Gilmore at the top of the market, there is depth in this class for the Patriots to give a similar offer to Jalen Mills’ 4-year $24 million contract from last season. Donte Jackson is a younger and less expensive option with scheme versatility.