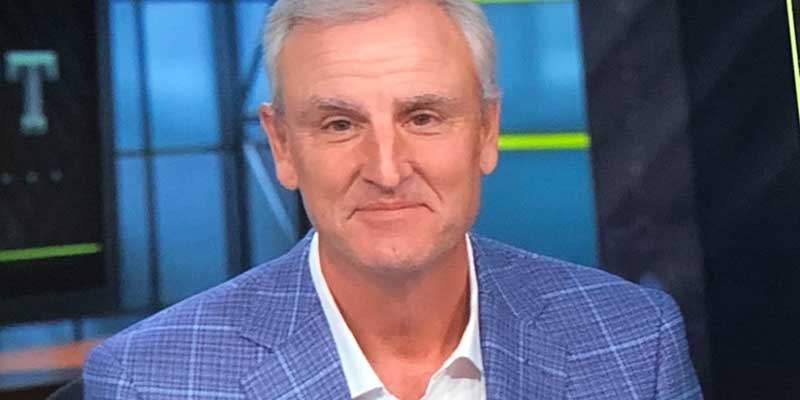 After a 23-year run at ESPN in which he hosted NFL Live and the network’s draft coverage, Trey Wingo continues to be an active voice in sports media. Among other things, he hosts a weekly podcast, Half Forgotten History with Trey Wingo.

We caught up with Wingo for this week’s Friday Five…

My dad. Actually I just recorded a podcast with my dad for Half Forgotten History, which will be really fun. When I was a kid, whenever there was a teacher in-service day or something, I would go into the city with him. We lived in Greenwich and we’d take the train in. He worked at the Time Life Building as a managing editor of People magazine. I thought he had the coolest job in the world. All my friends, their dads were businessmen, lawyers, bankers — 9-to-5 — and my dad was writing about movie stars and stuff like that and I just thought it was the coolest thing in the world. He would give me copy and say, “Go take this to this editor over there,” and give me a chair with wheels on it, and I would scoot down the hallway backwards. I thought, If I could do something like that, it would be a lot more fun than a 9-to-5 office job. I didn’t think about it at the time but just seeing how much fun he had at the job made me think it would be a lot more fun to do something that you enjoy and make money and not just make money.

I went to Baylor as a radio/television major and that lasted about six weeks. College was a social experience for me, for lack of a better term. I changed my major five times. The last time because I was going to graduate as a speech major and then halfway through my final semester they said, “You need another lab science.” And I said, “Well, then I’m clearly not a speech major because I’m not having another lab science!” So I changed it to a communication specialist. No idea what that means but it’s worked out. Then I decided when I got out of college that I did not want to go into the business. I didn’t want to work nights and weekends. So I took an office job in Washington, D.C., and it about drove me crazy. I would go to my office — this was before the Internet, children — and I would just read the sports pages every day, so I was terrible. I moved back home to my parents’ basement and got a job as a page at NBC — like Kenneth in the show 30 Rock, that’s what I did. I worked on the David Letterman show, Phil Donahue show, Cosby show (we don’t have to talk about that one!). And I just really wanted to get into television. So I got a job helping NBC News at Sunrise with some of their sports segments. I made a tape and sent it out there. My first TV job was in Binghamton, N.Y. I was there for two-and-a-half years — that was a long two-and-a-half years.

That’s a tough one. I’ve been very fortunate. I’ve covered the Olympics, US Open golf and tennis, Wimbledon, football — which has always been my favorite sport — NBA Finals, World Series. But I think, going to the Open Championship — or as we call it here, the British Open — for six straight summers was about the coolest thing I could imagine. Three of those years were in Scotland — twice at St. Andrews, once at Muirfield. Outside of the Olympics, it’s the oldest championship we have. It was just great to go overseas and watch that whole experience and see how real and raw it is. To be at St. Andrews twice — the home of golf — I had more fun doing that than almost anything. Now, I love the [NFL] draft, don’t get me wrong, and it was a higher profile event and it was great. But honestly, probably covering the Open for six straight years — it was money.

You can say this at the start of every year, but I’m trying to figure out how the same two teams don’t play in the Super Bowl. Two years ago, when it was the Chiefs and the Niners, well, I knew the Niners weren’t getting back. It was a fluke year with Jimmy Garoppolo. The Bucs kept everybody — and Antonio Brown. Jason Licht did an amazing job. The Chiefs still have Patrick Mahomes last time I checked. All due respect to the Bills and Josh Allen, the Browns and Baker Mayfield — but if 15 is healthy, you’re not beating him. Injuries change everything, obviously. Tom Brady eventually will die. I believe he’s mortal, all evidence to the contrary. Maybe he’ll stand up one day and say he made a deal with the devil to play until he’s 74. But if he’s healthy and the Bucs are healthy and the Chiefs are healthy, show me the team that’s beating those guys. The Chiefs did an amazing job revamping the thing that killed them in the Super Bowl, which was the offensive line. They traded for Joe Thuney. They get Kyle Long out of retirement. They got Orlando Brown. That was the difference in the Super Bowl — the Chiefs’ offensive line was Swiss cheese. My favorite clip about the Super Bowl was when Chris Godwin and Mike Evans were mic’d up and they kept saying, “How is Mahomes doing this? How is he getting away?” Well, Kansas City knew they had an issue and they had a salary cap issue and they still found a way to fix it. Is it possible that other teams could beat the Chiefs? Yes. Are you asking me to bet my money on it? I would say no. Barring injury, I think we may be seeing the first teams repeat in the Super Bowl, I think since the Cowboys and Bills did it in Super Bowls XXVII and XXVIII.

I’ll take the easy out here. HBO just did a thing on Twitter — three HBO characters you would have dinner with. This was easy for me: Tyrion Lannister, Game of Thrones, Tony Soprano, The Sopranos, and Omar Little, The Wire. I’m going to stick with those three forever!