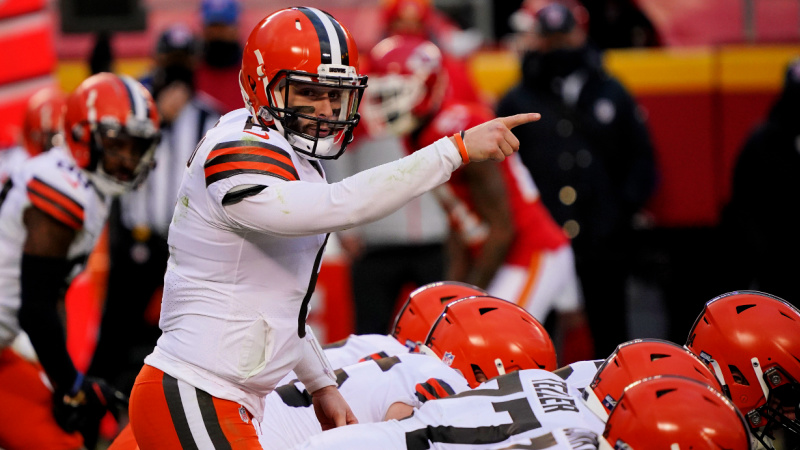 The Cleveland Browns have traded former No. 1 overall pick, QB Baker Mayfield, to the Carolina Panthers. Carolina will send a conditional 5th-round pick to Cleveland in exchange for Mayfield.

Baker Mayfield will be taking a $3.5 million pay cut to make this deal possible. The Browns will pay $10.5 million while the Panthers will take on $5 million.

Baker Mayfield had been the starting QB for Cleveland since 2018, but after the Browns executed a massive trade for Deshaun Watson this offseason, Mayfield expressed his desire to move on from Cleveland.

Baker Mayfield will now get the chance to compete for the starting QB job in Carolina, and he should be the frontrunner to take the job as it currently stands.

Tannenbaum says that Baker Mayfield will be challenged this season, and this may be a quick solution to a long-term problem for the Panthers:

“Baker will have a challenge to play at the highest level possible. He is the best option at quarterback this season, but this is a marriage of convenience more than anything else.”

Mornhinweg also sees this trade as a short-term upgrade for Carolina:

“The Panthers upgraded. Yet probably not the 6-8-10 year type QB for them. Real good ‘band aid’ as a solid plus type player – one that the Panthers can win more games with. Carolina can now have the view of winning more games with Baker and in 2-3 years acquire a talented young QB to insert into a winning team. This would allow Carolina to add a QB with no major cap hit to a Super Bowl type team.”

While recognizing the challenge presented to Mayfield to prove himself in Carolina, Tannenbaum also points out that Mayfield has the potential to be the next Vinny Testaverde:

“Mayfield is in a similar situation as Testaverde was,” he said. “Mayfield is a former first-overall pick who can go somewhere he is the back, perhaps initially, and contribute meaningfully as the season progresses.”

Tannenbaum adds: “Mayfield can benefit immensely from going to a team like Carolina or Seattle. Carolina has weapons like D.J. Moore, Robby Anderson, and Christian McCaffrey, but they also have an ambiguous quarterback situation with Sam Darnold and Matt Corral.”

There is certainly an upside that exists with Baker Mayfield. Former NFL QB Hugh Millen likes the potential that Baker Mayfield brings to the QB situation in Carolina:

“A little surprised at how low the compensation was. I think it’s interesting that Seattle passed on Mayfield given the cost of acquisition. But they with this move confirm their belief and Drew Lock or Geno Smith. Mayfield does not strike me as the type of guy who would be a good back up. I think he would be relatively volatile in that QB room. So, you have to bring him in thinking he’s your starter which was probably more viable in Carolina than Seattle. One reason for optimism for Carolina would be the torn labrum that Mayfield played with which may have affected him more than he let on or most people know so if he’s healthy that’s a good thing for him. I’m in agreement with those who will criticize his maturity level. I think he just needs to focus on being a pro working his ass off and keeping quiet. He’s got a much better arm than most people think. He has one of the highest recorded velocities at the combine with how many quarterbacks coming out in the last 15 years. There’s an upside there.

Millen adds that he believes Carolina can find success with Mayfield if they run a system that fits his skill set:

“I would try to run as close to the system that Lincoln Riley had at Oklahoma as possible. Lots of RPOs and misdirection.”

There is still uncertainty regarding the playing status for QB Deshaun Watson. Most reports indicate a likely suspension for Watson, but the number of games assessed remains unknown.

In the event of a Deshaun Watson suspension, Jacoby Brissett is now in line to start games for Cleveland. Joe Banner believes that Brissett can have success in Cleveland’s scheme:

“Stefanski will certainly adjust to accentuate Brissett’s strengths, though the changes will not need to be too drastic. Play-action passing has been a staple of Stefanski’s system dating back to his time in Minnesota, and Brissett’s mobility makes him particularly compatible with that section of the playbook. Given the Browns’ strong running game, Brissett should be able to find success.”

It will be interesting to see how each team performs in 2022 following this trade, and conveniently enough we will see Carolina and Cleveland matchup in Week 1, in Carolina.