Drafting is an art form. For all we say about the quality of players coming through from college to the NFL each year, the average career length of a first round pick is just over six years. And this has been on a downward trajectory since 1995.

It’s so difficult to find a group of guys that are going to transform your franchise for the future, but it’s not impossible. Some General Managers have been able to put together high-quality drafts year after year that have taken fledgling franchises to Super Bowl contenders. We take a look at the five best drafting teams since 2017.

The Saints could make this list almost solely due to their 2017 draft. It’s one of the best draft classes seen in recent history. Marshon Lattimore, Ryan Ramczyk, Marcus Williams, Alex Anzalone, Alvin Kamara, and Trey Hendrickson. The group has combined for nine Pro Bowls and three All-Pro selections.

All seven players drafted by the Saints in 2017 went on to sign second contracts with a total value of $402.05m. The only downside from this draft might be the inability to keep all their selections, as only three players remain on the roster.

The Saints’ drafting hasn’t quite been at the 2017 levels since, but there are still plenty of selections deserving of second contracts once their rookie deals expire. Notable draftees after 2017 include Marcus Davenport, Tre’Quan Smith, Chauncey Gardner-Johnson and Cesar Ruiz. We stay in the NFC South, because the Saints’ divisional neighbors have also spent the past 5 years putting together a great lineup of homegrown talent and it all came to fruition in 2020 when Tom Brady led the Bucs to the Super Bowl.

The Bucs had been slowly building a framework that just needed a solid QB. Todd Bowles built a run-stuffing, blitz-heavy defense, picking up elite defenders like Vita Vea and Devin White in consecutive drafts and complementing this with solid backfield help in Carlton Davis and Jordan Whitehead. To give Mike Evans some partners, the Bucs drafted OJ Howard, Chris Godwin, Ronald Jones and Scotty Miller.

Turns out they got more than just a solid QB, the Bucs got a great one. Brady arrived at a perfect situation in Tampa in 2020: a top five offensive line, a depth of offensive weapons and a defense that refused to give QBs a moment of rest. He was able to establish leadership, bring in more weapons of his own, limit turnovers and help this already elite Bucs team cross the finish line. 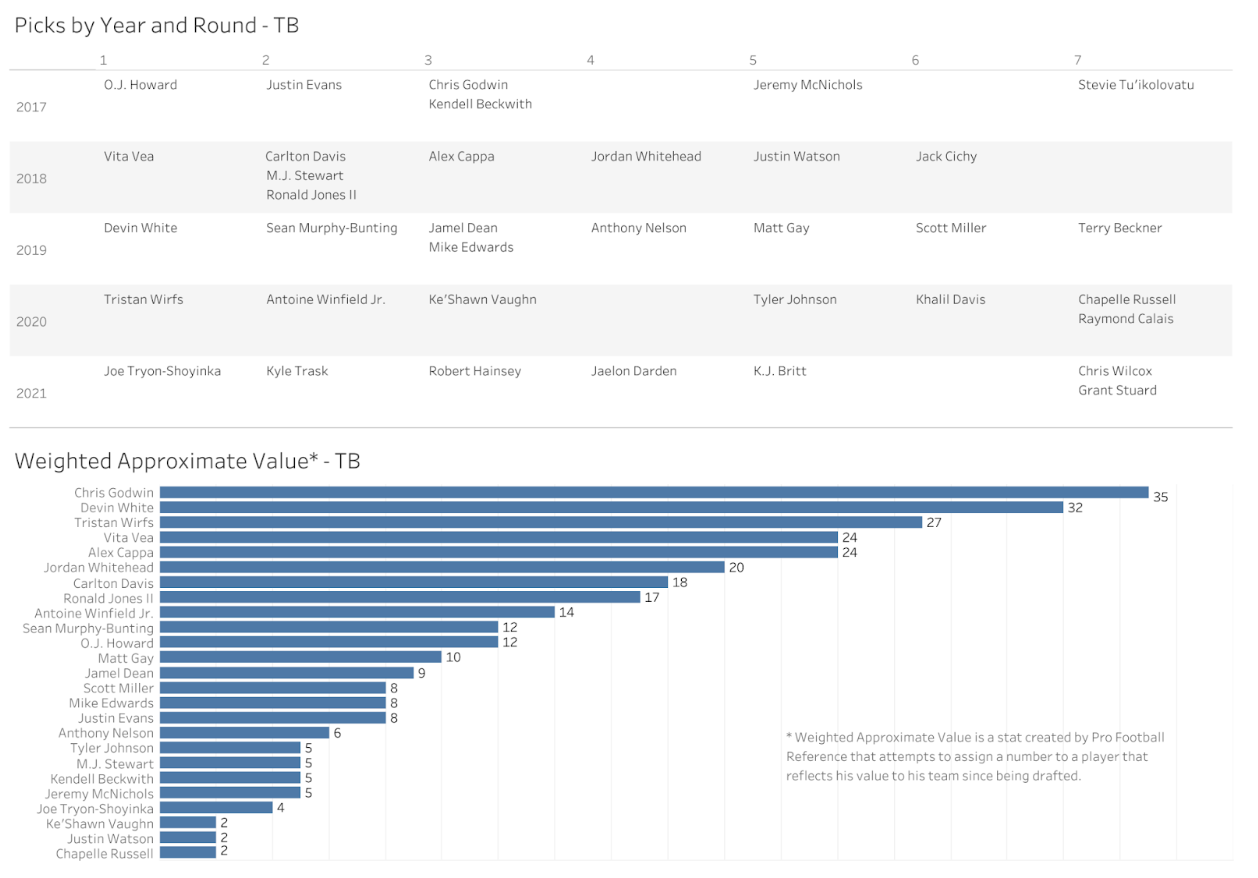 The most notable selection for the Bills over the last five years has to be Josh Allen, but there’s a much bigger picture to what the Bills have built here. The Bills hadn’t had a double-digit winning season since 1999. There was clearly a lot of positions that needed addressing and Sean McDermott set about doing this after being hired as the Bills HC in 2017. Tre’Davious White, Dion Dawkins and Matt Milano arrived in 2017, followed by Allen, Tremaine Edmunds and Wyatt Teller in 2018, the latter of which would leave for Cleveland in 2019 and go on to make two Pro Bowls. Devin Singletary, Gabriel Davis and Ed Oliver are the notable selections from the following drafts, but it was really the first two years that set the direction the Bills were heading in.

The result of this rebuild? A total of six Pro Bowl selections, four All-Pro selections, three consecutive double-digit winning seasons and a legitimate shot at a Super Bowl. The most intriguing aspect of the Colts successful draftees since 2017 is that they are almost exclusively in non-skill positions. It’s the players that don’t always appear on stat-sheet, but it’s a testament to the foundations that the Colts have built for a franchise in a situation not too dissimilar to the Bucs pre-Brady.

Malik Hooker, Grover Stewart and Marlon Mack were drafted in 2017, followed by the Colts’ best draft of the past five years in 2018, where they picked up Quenton Nelson, Braden Smith, Darius Leonard and Nyheim Hines. Jonathan Taylor and Michael Pittman Jr. are the most notable selections from the previous two years. The Colts might be a QB and WR away from challenging for the Super Bowl and it will be interesting to see how early they address the WR concern in this upcoming draft. The Bears might be a surprising addition here, especially since their record doesn’t really reflect a team that has drafted that well, they have a combined record of 22-27 in the past three years. This might be more an example of the glaring gaps that they have on the roster and not necessarily an issue with the personnel they do have. You simply can’t win games without a solid QB and Mitch Trubisky and Nick Foles were unable to provide this for the past five years. The Bears will hope that the QB issue was solved last year when they drafted Justin Fields, something we’ll be able to truly evaluate this year when Fields takes over the reins as the true QB1.

Eddie Jackson and Tarik Cohen are the big names from the 2017 draft, followed by Roquan Smith, Anthony Miller and Bilal Nichols the year after. David Montgomery was drafted in 2019 and the Bears added Darnell Mooney in 2020, who is slated for a breakout year after showing promising chemistry with Fields last season. An Alternative Way to Look at Draft Performance

Approximate Value is a metric created by Pro Football Reference that attempts to assign a number to a player that reflects his value to his team since being drafted. It essentially attempts to compare how the offense or defense performs with and without the specific player on the field and derive his value from that. It’s not a perfect measure by any means, but it does show a reasonable correlation to PFF grades and individual stats.

You can take a look at the dashboard below that averages Approximate Value by each team and round. We can see which teams are the best at finding hidden gems and the others that really struggle to nail those early picks. The second tab shows the players selected by each team for every draft from 2017-2021.

Click here for a Tableau visualization of the data!