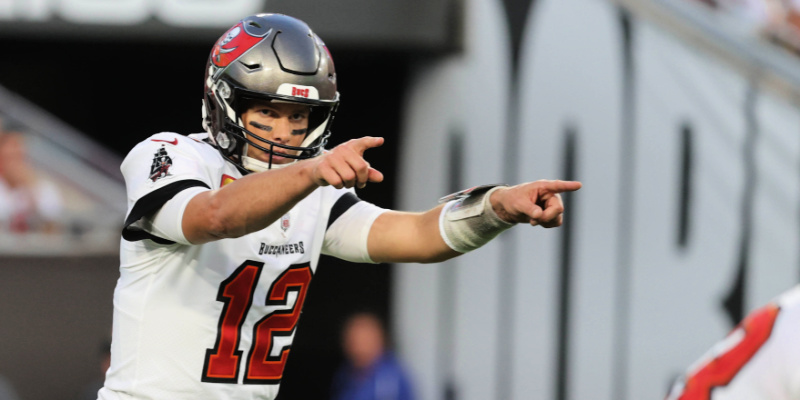 “I’m coming back for my 23rd season in Tampa. Unfinished business LFG.”

When the ball is kicked off for the start of the 2022 regular season, Tom Brady will become the first QB in NFL history to start at 45 years old. He continues to defy logic and age as he seeks his eighth Lombardi Trophy.

Brady gets a lot of credit for being self-aware to make the decision Sunday – the announcement comes on the day before the legal tampering window opens and three days before the start of the league year on Wednesday. This timing sends a clear message to Tampa’s 24 free agents and will entice many of them to return.

These past two months I’ve realized my place is still on the field and not in the stands. That time will come. But it’s not now. I love my teammates, and I love my supportive family. They make it all possible. I’m coming back for my 23rd season in Tampa. Unfinished business LFG pic.twitter.com/U0yhRKVKVm

Running an NFL team, you have to be able to adjust to opportunities as they present themselves. Jason Licht and the Buccaneers Front Office therefore deserve credit for building in flexibility in case Brady decided to return. While this is something they were hoping for, they couldn’t predicate their entire play on his unretirement. Instead, as Jason Licht noted at the Combine, they “left the light on for Brady,” giving themselves enough flexibility to bring back key free agents.

Former Lions Team President Tom Lewand feels that, “Brady’s decision is not particularly surprising given some of his recent comments and the speed at which the quarterback decisions are being made around the League. It certainly keeps Tampa among the NFC elites.”

Dr. Jess Flynn echoes Lewand’s sentiment that Brady’s return is unsurprising. She notes that “Brady is at a point in his career where he’s always going to be year-to-year, but I suspect that after he committed to major knee surgery last off-season, the team probably expected to have him back for at least another season.”

To chase their second championship in three years, the Bucs will look to replicate their strategy from last year. In the 2021 offseason, Tampa deviated from their typical contract philosophy, prorating money into future seasons to maximize their championship window. They spent the second most cash last offseason ($253.45M), and they should be expected to spend aggressively again this offseason.

In terms of maximizing their championship window with Brady, they will look at their key free agents that are currently about to hit the open market. Their plan will be to mortgage the immediate future of their franchise and keep the key members of their roster on the Bucs for as long as they can remain competitive with Brady at the helm.

Brady is coming off his age 44 season in which he led the NFL in passing yards and passing TDs. Following their 2021 model, the Bucs will look to sign significant contributors to low cap hits with high signing bonuses (cash) in order to maintain a low cap number. This will allow them to get under the cap and push bonus money forward. They will certainly be paying more cash than cap in 2022 and possibly 2023, if Brady plans to stay longer than one year.

As they look to defend their first NFC South title since 2007, the Bucs have significant decisions to make. In terms of Effective Cap Space — the maximum amount of space a team will have when they sign at least 51 players — the Bucs are projected to be $6.43M over the $208.2M unadjusted cap. Though they can create just over $84M in cap space through max restructures, such moves were never part of their strategy until last season.

As for Pro Bowl LG Ali Marpet, reports indicate that he will remain retired unlike his QB. Marpet announced his retirement from the NFL in late February at the age of 28, coming off his first Pro Bowl season.

Jensen and Cappa should be the priorities to solidify the OL with Gronkowski highly likely to return. On the defensive side, they will look to bring back key playmakers on the backend: Carlton Davis, and Jordan Whitehead. On offense, they could look to bring back Leonard Fournette/Ronald Jones II, or draft a running back to pair with Brady’s pass catching options (Godwin and Evans). An interesting note is that James White, long-time Patriots pass-catching RB, will be a free agent and could look to reunite with Brady in Tampa. It is a reasonable assumption that few “new” free agents will sign with the Bucs as they look to bring back their core.

Tampa also recently restructured Vita Vea’s contract, which cleared up $7.64M of cap space for the 2022 season. They converted the majority of Vea’s 2022 salary into a signing bonus after signing him to a 4-year extension in January.

Pending a renegotiation, Brady’s current deal is for $25M APY, which is less than Kirk Cousins, who just signed a one-year extension for $35M. The question, then, is what does this mean for Aaron Rodgers? Does he take a lesser deal to help the team or does he get as much in one year ($50M) as Brady is making in two? The latter would be a big advantage for Tampa over Green Bay, perhaps giving the Super Bowl LV Champs the edge in the NFC.