Fantasy Twitter is similar to the real world sometimes. If someone posts rankings, data, or rationale for a particular player, strategy, or take, we’ll find supporters and people arguing against it. One that elicits conversations involves zero running back or ZeroRB. ZeroRB and antifragility should be synonymous at this point, but drafting a ZeroRB team can make drafters uncomfortable. We could argue all day on defining ZeroRB, but we’ll focus on the concept of drafting wide receivers, an elite tight end, and an elite quarterback in the first handful of rounds. While we could mine for value in the running back dead zone, it’s typically more profitable to draft receivers. It’s preferable to use ZeroRB with 0.5 PPR and PPR scoring and rosters with three wide receivers and multiple flex spots.

That said, it doesn’t mean avoiding all running backs in the first handful of rounds. We also should be flexible if a player like D’Andre Swift of 2021 falls into the dead zone possessing RB1 skills and value. It reminds me of intermittent fasting, which I’ve done for the past two to three years. Most days, I’ll fast for 14 to 16 hours. However, I’ll also be flexible if there’s a special occasion or circumstance. Or there might be times when I don’t fast for 14-16 hours, but I’ll accumulate to that total by missing a meal. The overall point – with any strategy, especially ZeroRB, we want to be flexible with how the draft plays out and not rigid in our thinking. Let’s look at several of my top ZeroRB options with data from SportsInfoSolutions and TruMedia.

We could honestly go with Chase Edmonds, Sony Michel, or Raheem Mostert here with the murky Dolphins backfield, since they’re all new arrivals. Add in the new head coach Mike McDaniel, and it’s unknown how the offense will shift with the addition of Tyreek Hill. The narrative around McDaniel hints at the 49ers’ run game, since he served as the offensive coordinator in 2021, with the five previous seasons as the run game coordinator.

Last season, the Dolphins ranked 11th in Pass% and 24th in Rush%, with Myles Gaskin and Duke Johnson finishing as their top two backs in rushing yards. Meanwhile, the 49ers remained more run-heavy with the fourth-best Rush% and second-lowest Pass%. Interestingly, the 49ers had a slow pace of play, with 62 plays per 60 minutes (No. 30) and 28.4 seconds per snap (No. 29). The Dolphins probably won’t pass as often with a more run-heavy approach, leading to potentially better passing efficiency from Tua Tagovailoa and their pass-catchers.

Edmonds is arguably the most explosive back with the pass-catching upside, though Mostert possesses game-breaking speed when healthy. Before Edmonds suffered a high-ankle sprain in Week 9, he garnered a 16% target share versus James Conner’s 2% share. From an expected points standpoint, Edmonds showed a balanced profile with a 5.4 ruEP (No. 41) and 7.1 reEP (No. 12) per game during weeks 1 to 8. 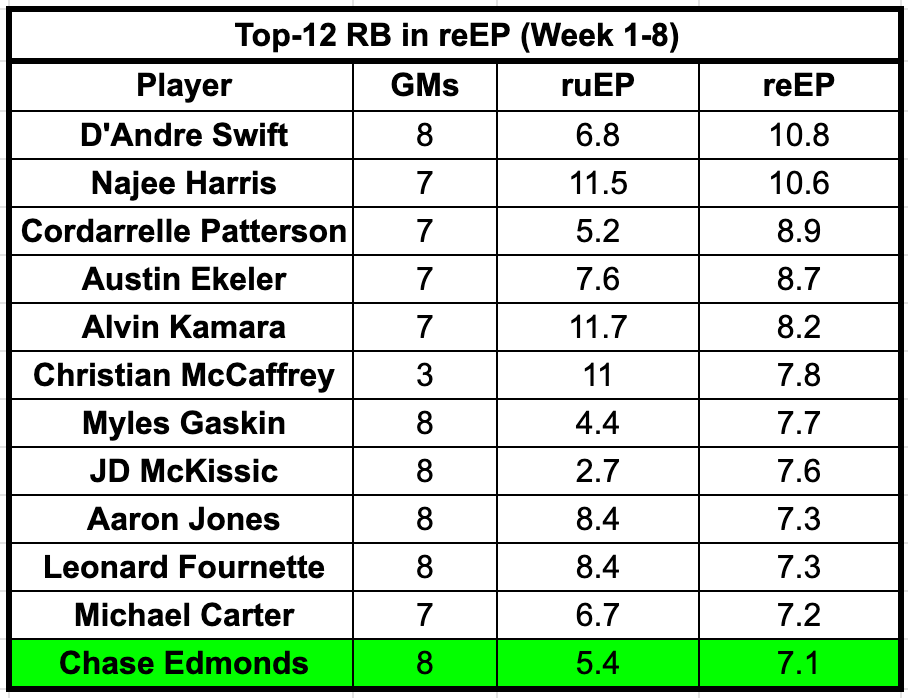 If we look at the top 12 in reEP per game, several backs have an ADP as an RB1. That doesn’t mean it’s likely that Edmonds sustains his successful expected points role to finish as an RB1. However, Edmonds is a perfect ZeroRB option in a murky backfield with the rushing and receiving skills of backs that go much earlier in drafts. Even from a real-life standpoint, Edmonds ranked third in EPA amongst backs with 100 carries, according to SIS. Since Edmonds goes in the sixth or seventh round, fantasy managers could easily have an elite tight end, three to four receivers, and an elite quarterback before selecting him as one of my top ZeroRB targets. Take a chance on Michel and Mostert, though we won’t cover them in detail here.

ZeroRB Targets From Past Articles

Darrell Henderson, Kenneth Gainwell, and Michael Carter all landed in my drafting backward strategy and cheaper alternatives at QB and RB article. I provide detailed breakdowns of those three options. Henderson remains slept on, though offseason buzz from Sean McVay raises Henderson’s draft stock. Unfortunately, Cam Akers and Henderson have soft tissue injuries, according to the Jourdan Rodrigue of The Athletic. It might impact Henderson’s availability and draft stock, but he showed a balanced profile to begin the 2021 season before Sony Michel and Akers clouded our memories.

In Kenneth Gainwell's best 4 games, he averaged 18.9 PPR/G, aligning with the 4 highest target shares of 18% or higher.

Gainwell boasts the receiving skills to garner a shared role in the Eagles backfield with the rushing ability to take over a heavy workload if Miles Sanders misses time. If Breece Hall hadn’t landed with the Jets, Carter’s ADP and fantasy stock would be much higher. Hall deserves the elite comparisons, but don’t sleep on Carter, who boasted top-12 advanced stats on the ground with receiving skills to thrive in a shared and heavier workload.

David Montgomery is the prototypical running back dead zone option and an ADP in rounds four to six, where we often find breakout receivers. Montgomery has flashed in the advanced stats with the 28th-best YAC/Att (2.4) and 26th-highest broken plus missed tackle rate (13.3%) amongst backs with 100 carries in 2021 per SIS.

Meanwhile, Khalil Herbert ranked 16th with 2.6 YAC/Att and 20th with a 14.6% broken plus missed tackle rate. From Week 5 to 8, Herbert averaged 22 opportunities and 19.5 rush attempts per contest. Last season, only one back finished with 100 scrimmage yards and 100 rushing yards against the Buccaneers. That’s none other than Herbert. Unfortunately, Herbert’s season-long 3% target share doesn’t excite us, though he reached a double-digit target share in three games as a rookie. Montgomery averaged a 12% target share in 2020 and 2021, so there’s a chance Herbert earns receiving opportunities if he garners a heavier workload.

As an older prospect, don’t forget that he finished with 1,183 rushing yards at Virginia Tech, translating into a 71% backfield dominator rating with above-average workout metrics. He boasted a 4.46 40-yard dash at 210-pounds leading to a 76th-percentile Speed Score. Herbert remains a ZeroRB stash candidate if anything happens to Montgomery around pick 150.

Last season, I loved D’Andre Swift. In 2021, Swift flashed with five RB1 weeks due to the massive receiving profile. From Week 1 to 11, Swift averaged 10.1 receiving EP per game, ranking first in front of Najee Harris and Christian McCaffrey. Unfortunately, Swift suffered a shoulder injury in Week 12, causing him to miss a few weeks. We reference that timeframe because Swift averaged 20.4 opportunities versus Jamaal Williams at 11.9 per game. While Swift shared with Williams, Swift garnered the high-value touches with a 20% target share for Swift and a 6% target share for Williams.

Williams also battled injuries of his own during the weeks that Swift missed. However, he led the Lions backfield with 17 opportunities per game from Week 12 to 18, though a measly 6% target share. It’s reasonable for the Lions to share touches with Swift and Williams, though we’re hoping Swift keeps that Austin Ekeler-like pass-catching role with the rushing upside. Williams could provide weekly value as an RB3, though his value relies on the rushing production. The advanced stats profile is decent for Williams but not mind-blowing, with 2.4 YAC/Att (No. 32) and an 8.5% broken plus missed tackle rate (No. 46). Williams and Khalil Herbert have similar Underdog ADPs. I prefer Herbert over Williams, given Herbert’s upside, but Williams should have standalone value throughout the season.

The Browns have been a fruitful team for running back production, and D’Ernest Johnson isn’t a stranger to that narrative, with three RB1 weeks in 2021. Johnson makes us drool with the advanced stats. According to SIS, he tied for second with 3.3 YAC/Att and first in broken plus missed tackle rate (22%) amongst backs with 100 carries. With Kareem Hunt requesting a trade, Johnson could leap into a backup role behind Nick Chubb. Jerome Ford has received some pre-season buzz, but Johnson proved he could handle an RB1 workload with 25.7 opportunities across three contests. Chubb and Hunt didn’t play in two games, but in Week 18, Chubb totaled ten opportunities. Throughout the past two seasons, the Browns shared opportunities with Chubb and Hunt, and Johnson could have a shared role with Hunt traded away. Take advantage of Johnson’s depressed ADP around pick 200 since it will skyrocket if Hunt changes teams. Even if Hunt doesn’t leave, Johnson has contingent value if Hunt or Chubb misses time.

One final ZeroRB stash candidate for deep leagues includes Chris Evans. As the third back on the Bengals depth chart, Evans hardly saw the field as a rookie with a 12% snap share, 2.8 opportunities per game, and a 5% target share. However, Evans boasted a 94th-percentile Agility Score and a 96th-percentile Explosion Rating with a slightly above-average Speed Score (64th-percentile).

Unfortunately, Evans lacked the college production with a peak sophomore season with 685 rushing yards, translating into a 53% backfield dominator rating. Evans shared touches at Michigan with Hassan Haskins and Zach Charbonnet, plus a 2019 academic suspension impacted his college career. Samaje Perine still exists, and his advanced stats profile isn’t that bad, with 3.2 YAC/Att (No. 10) and 12.7% broken plus missed tackle rate (No. 40) amongst backs with 50 carries. While Evans remains a dart throw even if Mixon misses time, he possesses the athleticism we look for in running backs.