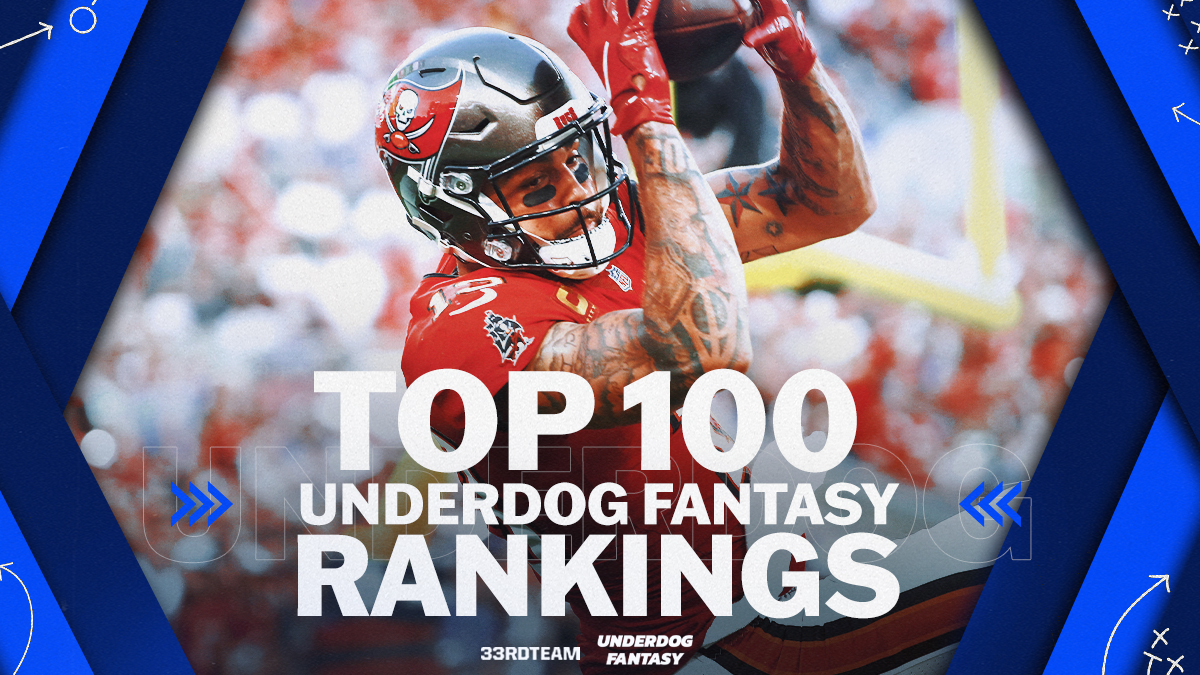 Below, you’ll find my top-100 Underdog Fantasy rankings, along with tiers and other contextual player/strategy notes.  Be on the lookout for a follow-up article in the next few days detailing my rankings for picks 100-216.

Underdog Fantasy is half-PPR scoring in a best ball format.  For those unfamiliar, best ball is similar to a managed redraft league, except the computer sets your lineup each week.  You draft a 18-round team on Underdog, and then during the NFL season, the computer takes your highest scoring QB, 2 RBs, 3 WRs, 1 TE, and 1 FLEX (RB/WR/TE) and gives you credit for the fantasy points scored.

My Rank – Where I am personally ranking a player on Underdog

UD Rank – The player’s rank based on Underdog Fantasy ADP You want exposure to all of Taylor, CMC, Kupp, Jefferson, and Chase, so I have kept them ranked exactly at ADP.  All are in Tier 1 because I view their upside and floor (when healthy) as higher than any other players in fantasy.

As you read through these rankings, you’ll want to have my redraft top-160 rankings handy for full write-ups on every player.  That’s a great place to learn more about why I’m absurdly high on Tee Higgins, and incredibly low on Derrick Henry in 2022.  Also, to better understand why a RB like Henry concerns me in fantasy, refer to my recent article on Player Archetypes to Target and Fade.

I find that I’m generally most satisfied with my teams when I leave this section of the draft with one RB and one WR.  That will also set you up for roster construction flexibility.  Usually I only consider starting RB-RB if I can pair CMC/Taylor with one of Swift, Saquon, Jones, or Fournette in round two.

Tier 3 and 4: A Slightly Murkier Path to Elite Production While I have Josh Allen ranked – in a vacuum – several slots below consensus, if you take Stefon Diggs in round one, you should rotate in some round three Josh Allen for the stack.

Kyle Pitts and Darren Waller from this tier, along with Kelce from tier one, are my preferred early-round TEs.  All three have a straightforward path to 130 or more targets in 2022, and all are well above average athletes after the catch.

While Travis Etienne’s ADP has risen in the past month, you still want exposure to him, and this quick video outlines a distinct advantage he has over every other NFL RB: In this range, I most often find myself taking one of the three extremely mobile QBs, followed by a WR in the Darnell Mooney to DeVonta Smith range.  With Kyler Murray and Jalen Hurts, I’d take Kyler Murray anytime you have Marquise Brown already on your roster.  Else, I’d rotate between the two in that range.  I wouldn’t recommend having more than 20-25% exposure to any of these players if playing mid-high volume.  For example, if you are in 50 drafts, I wouldn’t draft Kyler or Hurts (even though I’m very high on them) more than 10-13 times.  Average exposure to a player is 1/12 (8.3%), since there are 12 people in every draft; so, if I really like a player, I’d aim to have roughly three times as much of that player as the average drafter.

In a vacuum, I don’t believe Justin Herbert and Patrick Mahomes are good best ball picks at their current ADPs.  However, if you have taken any of the three early Chargers players, I would lean Justin Herbert in this range for the stack.  The same applies to Mahomes if you take Travis Kelce early in your draft.  If you draft Mahomes in round five without Kelce already on your team, make sure to get at least one of Skyy Moore and Marquez Valdes-Scantling onto your team. This starts to become the point in the draft where stacking (within half a round of ADP) should become a high priority.  If I take Mike Evans in round two, Tom Brady becomes a strong target.

I want most of my drafts to have one QB on the team after this section.  Taking two QBs by this point in the draft is slightly too much draft equity tied up into the position.  If Kyler Murray is already on my roster, and Trey Lance is sitting there at pick 80 (4 slots after ADP), I’d still prefer taking a non-QB for my team. If you have already drafted Patrick Mahomes, Skyy Moore and Marquez Valdes-Scantling should be high priority selections.  For Mahomes to pay off his round five price tag without being a highly mobile QB, he needs to throw 40 or more TD passes.

In the near future, there will be an article breaking down players 101-216 for my Underdog Fantasy Rankings.