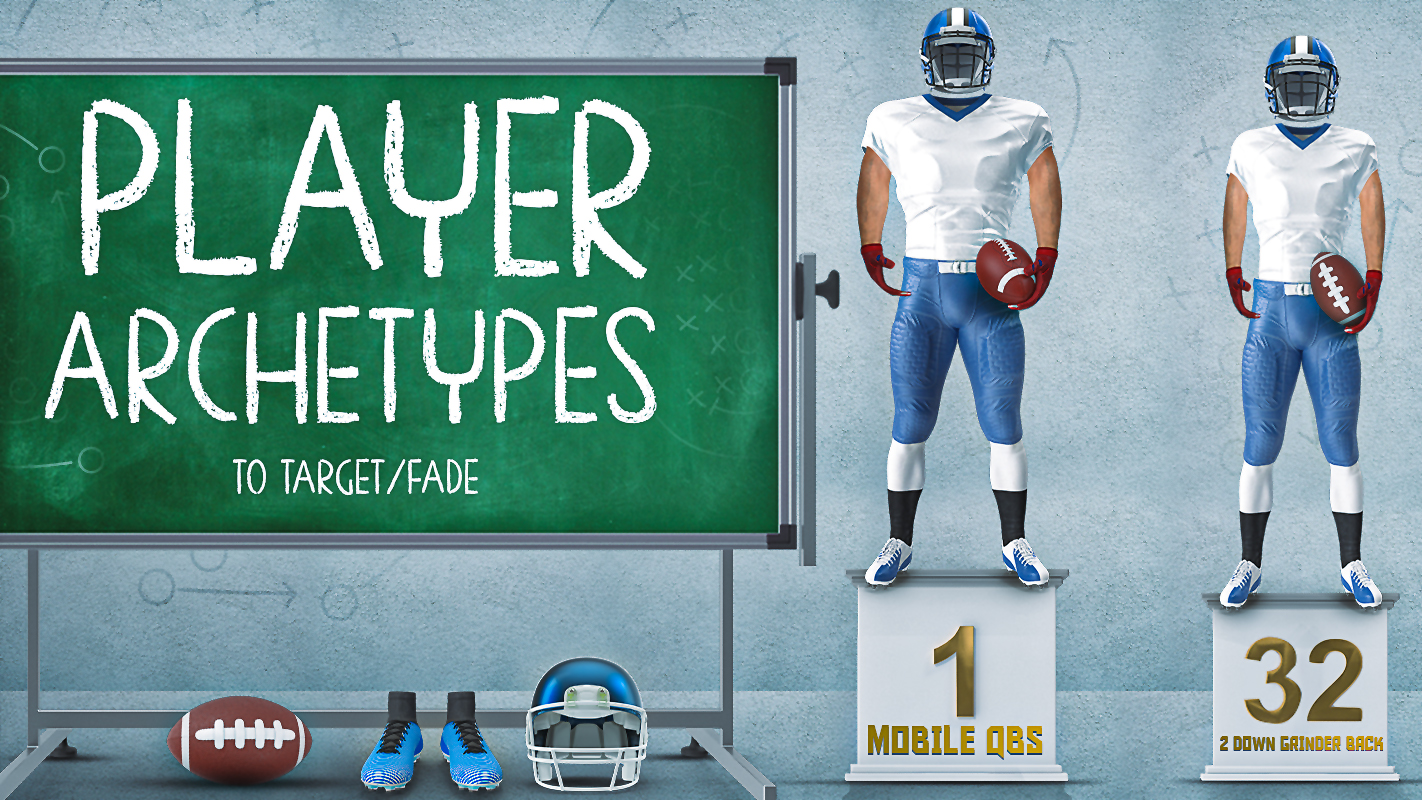 What is a Player Archetype?

Search “archetype” on Google and you’ll be hit with several very intimidating definitions courtesy of my scholarly friends at Merriam-Webster.

I’m no English major, so let’s think of player archetypes as players that share a similar trait or group of traits. For example, the “young, mobile quarterback” could be a player archetype, with Lamar Jackson, Jalen Hurts, Kyler Murray, Justin Fields, and Trey Lance fitting into this category. All five of these quarterbacks share two traits: youth and mobility.

If you’re new to my work, I am a “hardcore” analytics guy, as well as someone who prides himself on making research findings easy to understand. In this article, you’ll get the insights I derived by combing through the 44,000 plays from the 2021 NFL regular season (using R code, I’m not manually going through all the plays like an animal).

Running Backs who get Targets and Red Zone Work

The math behind this one is simple: carries do not score fantasy points. The average RB carry in 2021 was worth 0.62 fantasy points. If your fantasy RB totaled 20 carries in a game, 20 * 0.62 = 12.4 expected fantasy points. 12.4 PPR points per game would have been the RB22 per game among RBs with 8 or more games played in 2021 – think Melvin Gordon from last season.
So, how do running backs score fantasy points? Through targets and red zone work. The average RB target in 2021 was worth 1.53 points in PPR leagues, 1.15 in half-PPR, and 0.76 points in standard scoring. Put another way, a target to a running back is worth: 2.5 carries in PPR, 1.9 carries in half-PPR, and 1.2 carries in standard leagues.

Because fantasy football scoring disproportionately weights goal line carries and targets, focus on drafting RBs who do both. A few early-round RBs that project to get both include: Christian McCaffrey, D’Andre Swift, Leonard Fournette, and Saquon Barkley. To add another layer, since we know that RBs get injured frequently, we should always search for RBs that get targets and goal-line work, while avoiding too many carries between the 20s. The aforementioned D’Andre Swift, along with Jaguars RB Travis Etienne, fit this archetype, too.

No matter the ADPs of the RBs listed above, you will want some exposure, since all of them have the overall RB1 in their range of outcomes when they have access to the two types of valuable RB touches.

If you’re searching for a late-round RB with this potential, look no further than Kenneth Gainwell of the Eagles. He’s the latest drafted RB with a chance at getting his team’s targets and red zone work. As a rookie, Gainwell had 50 targets and 20 red zone touches. Miles Sanders only had 3 more total red zone touches and 16 fewer targets.

There is still a strange stigma surrounding QBs in fantasy, where drafters have a natural bias against those they consider to be below-average “real life” QBs. A few that come to mind are Justin Fields, Jalen Hurts, Trey Lance, and Daniel Jones.
With common fantasy scoring, each QB rush yard is 2.5x more valuable than every QB pass yard (1 point for 10 yards rushing and 1 point for 25 yards passing), and every QB rushing TD is worth 1.5x more than each QB passing TD (6 points for rushing TDs, 4 points for passing TDs).

When chasing QBs with a difference-making ceiling in fantasy football, we should be targeting QBs that are willing and able to scramble. In the past three seasons, Matthew Stafford has played in 41 regular season games, while Daniel Jones has played in 38 games. I can assume we are all in agreement that Stafford is a far better passer than Jones, yet both QBs have compiled exactly six games of 25 or more fantasy points during this time period.

You’d have a difficult time making the case for Jalen Hurts over Patrick Mahomes as a passer, yet Mahomes finished with 22 fantasy points per game (QB5), while Hurts finished with 21.4 fantasy points per game (QB6). The two were neck-and-neck last season; this offseason, Mahomes lost Tyreek Hill, while Jalen Hurts gained AJ Brown. And yet, there is a sizable ADP gap among these two heading into the 2022 fantasy season. Spoiler alert: I have Hurts ahead of Mahomes in my rankings.
Even when a QB like Stafford throws for over 40 TDs during the 2021 season, he can still be out-scored (by a full point per game) by Jalen Hurts and his paltry 16 passing TDs.

33rd Team contributor and former All-Pro CB Samari Rolle offered some thoughts on why, fundamentally, defending a mobile QB is a tough ask for any defense.

Rush attempts per game is a great quick-and-dirty stat to reference for QBs and can help us spot undervalued QBs by the market. Lamar Jackson ran the ball over 11 times per game last year (just like he did in 2019 and 2020) and is ranked as my QB2, behind only Josh Allen. If we assume Lamar Jackson is an average QB per rush attempt (which he is obviously not), then we can multiply 11 carries per game by 0.71 fantasy points per carry, to arrive at roughly 7.8 fantasy points on the ground per game. Compared to a non-mobile QB who fails to generate rushing production, that is like Lamar throwing the ball an additional 17 times per game (7.8 fantasy points on the ground per game / 0.45 fantasy points per throw).

In the middle rounds of your fantasy draft, Lamar Jackson, Kyler Murray, and Jalen Hurts are undervalued by the market. In the mid-late rounds, Trey Lance is seriously undervalued. And, if you want to really go dumpster diving, Trevor Lawrence, Justin Fields, and Daniel Jones can get it done with their legs and are available at the very end of your fantasy draft.

Before diving into why we should avoid the non-alpha WRs on bad offenses, let’s take a quick second to understand what we are actually really good at as fantasy football “analysts.” We are very good at evaluating which passing offenses will be above average and below average at the start of a season. Let’s walk through the 2021 results, and you’ll notice very few surprises.
To calculate how strong a passing offense was in 2021, I looked at QB fantasy points from passing (4 points per passing TD, 1 point per 25 passing yards, and -1 point per interception). Then, I ranked each 2021 team by these passing fantasy points. The top-10 teams (in order) were TB, DAL, LAR, LAC, KC, GB, CIN, MIN, BUF, and ARI. The bottom-10 teams (in reverse order) were CAR, JAX, NYG, CHI, PHI, HOU, CLE, NYJ, WAS, and TEN.

I’d argue that the only surprise here was TEN being in the bottom-10 after their week 1 starting WRs were AJ Brown and Julio Jones. All the other teams were more or less expected at the start of 2021. Now that we’ve established the likely predictability of passing offenses, we can return to non-WR1 production on each team.

First, I removed the best fantasy WR from all 32 teams from 2021. I simply took any WR who played 12 or more games and plucked out the guy from each team with the highest fantasy points per game. Then, I counted how many times the remaining WRs on each team scored 15 or more PPR fantasy points.

To apply this information in an actionable way, we should limit our exposure to WR2s in offenses that will most likely be below average. A few WRs that fit this archetype for 2022 include Chase Claypool (PIT), Tyler Lockett (SEA), Kenny Golladay (NYG), and Robbie Anderson (CAR). Based on the data, these players will most likely be difficult players to rely on weekly in 2022.

While the average RB carry may be worth 0.62 fantasy points, that’s inflated from red zone work. If we remove red zone carries, then this number drops to 0.48 fantasy points per carry. If your fantasy RB gets 20 carries (none in the red zone), they’d be expected to score 9.6 fantasy points. For context, Devontae Booker scored 9 fantasy points per game in 2021.
We must avoid the RBs who aren’t likely to get a lot of red zone/goal-line work, and who also won’t play on third downs (where passes are often caught). The two-down grinder back has a troubled relationship with fantasy points, as he struggles to score them, both in magnitude and via efficiency.

This year, I have identified two early-round RBs that fit this mold, as well as three middle-round RBs. In the early rounds of your draft, tread lightly on Derrick Henry and Nick Chubb. Derrick Henry does monopolize the RB carries in the red zone and at the goal line, but with the loss of AJ Brown, as well as a deteriorating offensive line, this Titans team may not find themselves in as many scoring situations as they have in prior years. We also know Henry does not play on third downs, with Dontrell Hilliard looking like the team’s clear change-of-pace and third-down back for 2022. In the first round of your fantasy drafts, avoid Henry, who is gearing up for 20-30 between the 20s carries per game (at 0.48 expected fantasy points per carry).

With Nick Chubb, he does not play on third downs either and is averaging only 1.4 receptions per game over the past two seasons. Last year, in games where Chubb and Kareem Hunt were healthy (seven games), Hunt had all 3 red zone targets. It’s head-scratching to me that fantasy gamers are willing to spend a mid-second round pick on Chubb when he also doesn’t even get all his team’s red zone and goal line carries.

In those seven overlapping games, Chubb had 43 red zone carries to Hunt’s 13, and Chubb had 11 goal line carries (within 5 yards) to Hunt’s four. Jacoby Brissett likely starts at least the first eight games for the Browns, so with Chubb, you’re getting a two-down grinder back in what should at least initially be a putrid offense, and paying a similar price to D’Andre Swift. Swift fits the archetype we are targeting for a RB and will see the majority of his team’s red zone work and receiving work.

In the middle rounds, avoid the Seahawks duo of Rashaad Penny and Kenneth Walker, as well as Antonio Gibson. The Seahawks’ third-down back will be some combination of DeeJay Dallas and Travis Homer, so already we won’t have many targets available for Penny and Walker. Additionally, this Seahawks offense should be downright terrible.

Remember, this is a team that ran the fewest offensive plays in the entire NFL last season, and now goes from Russell Wilson to the Geno Smith-Drew Lock tandem at QB. I want no part of an offense run by a medieval play-caller in Pete Carroll to begin with, and especially not the RBs. Expect gratuitous use of the run game and an offense that continually stalls between the 20s. Even if Penny or Walker goes down with an injury, we shouldn’t get too excited about the possibility of 20 non-red zone carries per game.
Antonio Gibson and JD McKissic overlapped in 11 games last year, and each saw 23 opportunities (combined carries and targets) on third downs in those games. Gibson is not the clear third-down option, and his 2021 targets were entirely dependent on McKissic’s health. In games where McKissic was fully healthy (excluding the game against SEA where McKissic left early), Gibson saw more than three targets in just one of those ten games.

In the 2022 NFL Draft, the Washington Commanders selected bruising RB Brian Robinson out of Alabama in round three. There is already talk of Brian Robinson as the short-yardage back for the Commanders, so Gibson’s role is getting squeezed from multiple angles: his red zone/goal line carries shrink with Robinson’s presence, and his targets are capped by McKissic. Gibson is likely not one, but two, injuries away from a high fantasy ceiling in 2022.