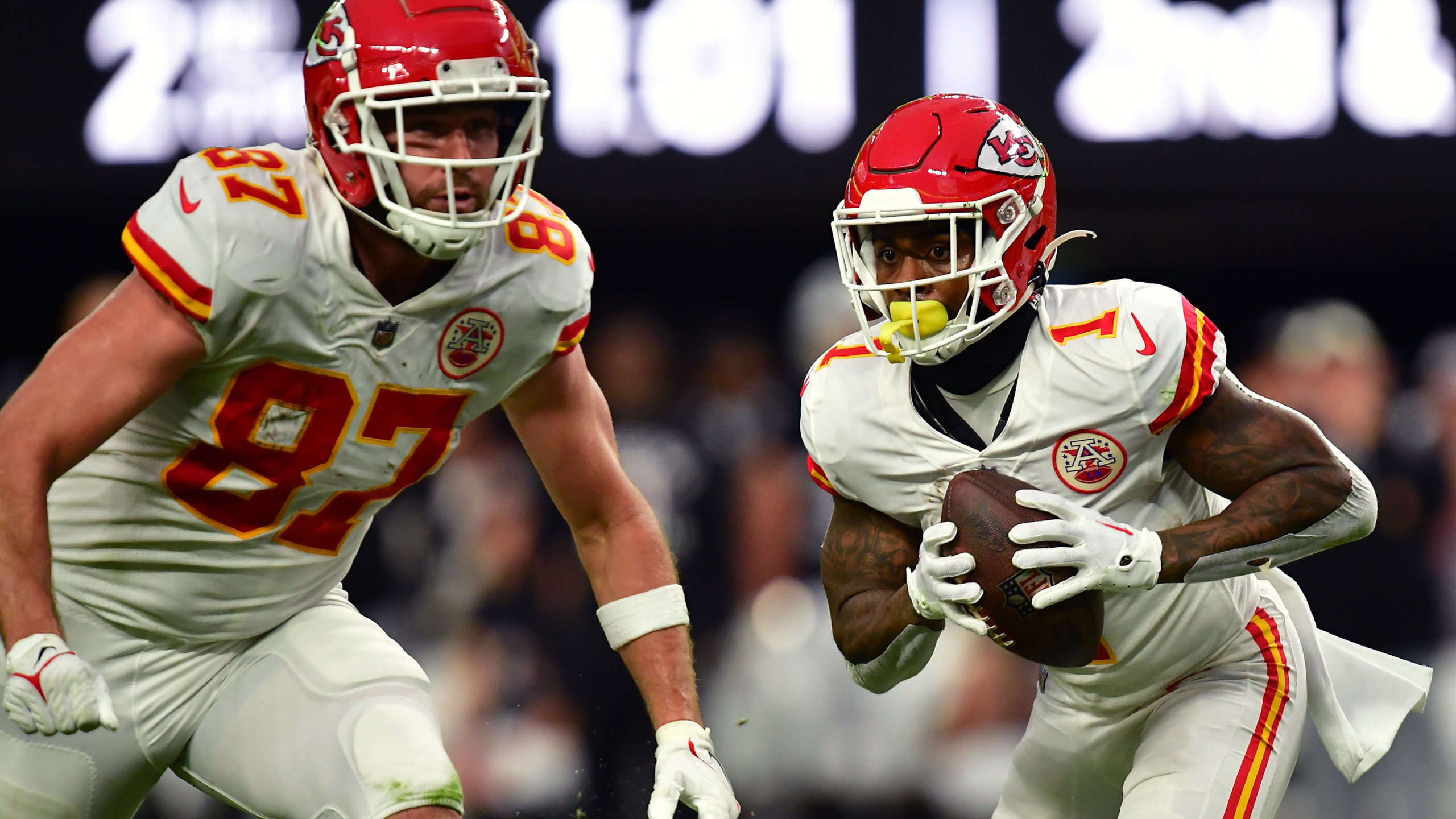 FFPC Playoff Challenge is entering its 20th year, and it has grown to a point where the prize pool is larger than most season-long tournaments on other sites. There are actually two different tournaments, with the only difference being the entry price ($200 or $35) and prize pools. There is no draft or salary cap, you just choose 12 players that you will roster throughout the entire playoffs to the Super Bowl.

FFPC scoring rules are a bit different than other formats, the most obvious being TE premium scoring (1.5 point per reception for TEs). It is also four points for passing TDs and one point for every 20 yards passing, so quarterbacks that pass for large yardage totals become a little more valued than most scoring formats. It is also full PPR (points per reception), so target leaders become very valuable.

Each week’s score will be added to your team’s total, so points carry over each week and accumulate for the duration of the contest. Super Bowl points will count as double the points toward each team’s total.

Each team will choose twelve (12) players from any of the 14 NFL playoff teams but only one player per team. So there’s no stacking, if you choose Patrick Mahomes as your QB, you may not have any more Chiefs players on your roster, including Kicker & Defense.

The playoff rosters consist of:

This contest is going to take a blend of projection and uniqueness that is very similar to building DFS GPP line-ups, but again, without stacking.

We want two high-scoring players in our line-ups from the Super Bowl teams because the points count as double, but we also want to lean toward rostering players with low ownership percentages to differentiate from the crowd. We will most likely want our QB, two WR and a flex player (RB, WR, TE) in the semi-final (AFC/NFC Championship) round.

Because the points accumulate throughout the tournament, we don’t really need to worry about whether we are at the top of the leaderboard after Wildcard Weekend. We can make up those points throughout if we have enough high-scoring players advance.

When you are constructing a line-up, it’s most valuable to know who you believe will make it to the Super Bowl. You are going to have to assume you are right about your playoff and Super Bowl predictions. When in doubt, just assume the higher seed will win. It is actually most important to pick the teams that will lose in the first round.

I’ve loved the emergence of the Miami Dolphins and Geno Smith-led Seattle Seahawks, but I don’t see any way they beat the Buffalo Bills and San Francisco 49ers, respectively. In fact, I have Buffalo and San Francisco upsetting the No. 1 seeds in the Championship round on their way to meeting in the Super Bowl. I won’t be rostering any Dolphins or Seahawks in my base (original) roster. After I decide which teams I like to advance and play multiple games, I work backward, eliminating players from losing teams from the important positions in the player pool.

The four other teams I see losing in the first round are the Baltimore Ravens, Jacksonville Jaguars, NY Giants, and TB Buccaneers. I will be taking my K and DST from this group. I think Justin Tucker is clearly the best, most consistent kicker in the NFL. The Ravens are fresh off a loss in the same stadium they’ll be playing in this week (Cincinnati), where Tucker kicked three field goals, including a 50-yarder. Tucker’s highest-scoring game this year also came against the Bengals.

My first thought when choosing a defense/special teams (DST) in a tournament like this one is to choose a team that will lose but might have an electric kick returner or has a few pick-sixes throughout the season. I want a losing team because I would rather have a WR continue through multiple weeks and leave the high variance DST to take the goose egg (0). I currently have this narrowed to the NY Giants, TB Buccaneers, and Jacksonville Jaguars, but it’s really more of the decision between Saquon Barkley, Chris Godwin, and Travis Etienne.

I really think we start our lineup build with Travis Kelce or George Kittle and go from there, they are the only two “difference makers” at the position that I expect to play more than one game. Kelce was by far the best-scoring TE over the course of the season, but Kittle has been dominant over his past four games.

Evan Engram, Dawson Knox, Mark Andrews and T.J. Hockenson can be considered, but Knox and Hockenson are not the optimal players on their teams. While Engram and Andrews are likely one and done. The 2021 Champion of this tournament actually had Dallas TE Dalton Schultz as his TE, so I might want to re-think this.

You probably want a QB in the Super Bowl since they are usually the highest-scoring, but we need to factor in opportunity cost at other positions. If we choose Patrick Mahomes at QB, we are really just forgoing Travis Kelce, but that could mean a ton in the TE premium format. We will check our options besides Kelce when we look at TE.

If we pick Jalen Hurts, we can’t play A.J. Brown, DeVonta Smith, Dallas Goedert or Miles Sanders. Mahomes and Hurts also have a bye in the first week, so we will need them to perform well in the Super Bowl to cover that Wild Card round deficit,

If we play Josh Allen, we are passing up on Stefon Diggs. There are several others we could use, but Diggs is the primary choice alternative. Buffalo is starting to feel like a team of destiny to me, and it’s pretty easy to make up points at the WR position.

If we go with Joe Burrow, we miss out on Ja’Marr Chase, Tee Higgins, or Joe Mixon. Last year’s champion rostered Mixon and credited him as the reason for his victory.

If you play multiple entries, build at least one line-up with each of the aforementioned as well as Brock Purdy, Dak Prescott, or anyone you feel has a chance to get there (not necessarily win).

We would like a running back from a team that is going to play 2-3 games, catch passes, have high-value touches, hopefully, lower rostered, but we don’t necessarily need him in the Super Bowl.

Austin Ekeler has been the top-scoring RB all season (third to McCaffrey and Jerick McKinnon over the past five games), we are only missing out on Keenan Allen or Mike Williams, who is probably out with an injury.

I mentioned what we sacrifice with Mixon when I mentioned Burrow at QB. If we have other RBs worth considering, they can be considered during the flex conversation.

Saquon Barkley, Leonard Fournette, Travis Etienne, and J.K. Dobbins are other RBs to consider, but they are likely to only be playing one round.

Think this is where you can differentiate the most. I want at least two of these in the AFC/NFC championship games, and hopefully, they all play three rounds.

The top-scoring WR Justin Jefferson is an obvious choice over his RB teammate Dalvin Cook, who has been disappointing most of the season and appeared to have gotten banged up in their Week 18 game.

Over their past five games, Jefferson, A.J. Brown, DeVonta Smith, Ja’Marr Chase, and CeeDee Lamb are all in the top six of PPR scoring.  Ja’Marr Chase was the WR4 this season in PPR points-per-game and the player I believe will be leaned on at the most important moments in each game.

Philadelphia WRs, A.J. Brown and DeVonta Smith have been the WR2 and WR3 over the past five games in PPR points-per-game, and that’s without Jalen Hurts at QB in two of those games. Pay attention as the week continues to determine the lesser rostered of these two players.

I prefer Dallas Cowboys WR CeeDee Lamb over RB Tony Pollard, but I will be mixing up my exposure here. For me, it was a decision between CeeDee and Ekeler or Pollard and Keenan Allen. Pollard could bump McCaffrey from your line-up as well, which opens up Kittle at TE and could open up rostering McKinnon at RB.

It’s very easy to mix up the last few flex positions. There are players like Godwin, Mike Evans, Fournette, Barkley, Etienne, DK Metcalf, Tyler Lockett, Tyreek Hill or Jaylen Waddle that could have a massive game in a loss and make the difference if the chalk hits in later rounds.

When it comes down to it, you are going to have to use your own intuition to finish in the money of these tournaments. Anyone who watches football knows it could very well be a player like Brock Purdy, Kenneth Gainwell, Mecole Hardman, or Elijah Mitchell that ends up winning it for this year’s champion.