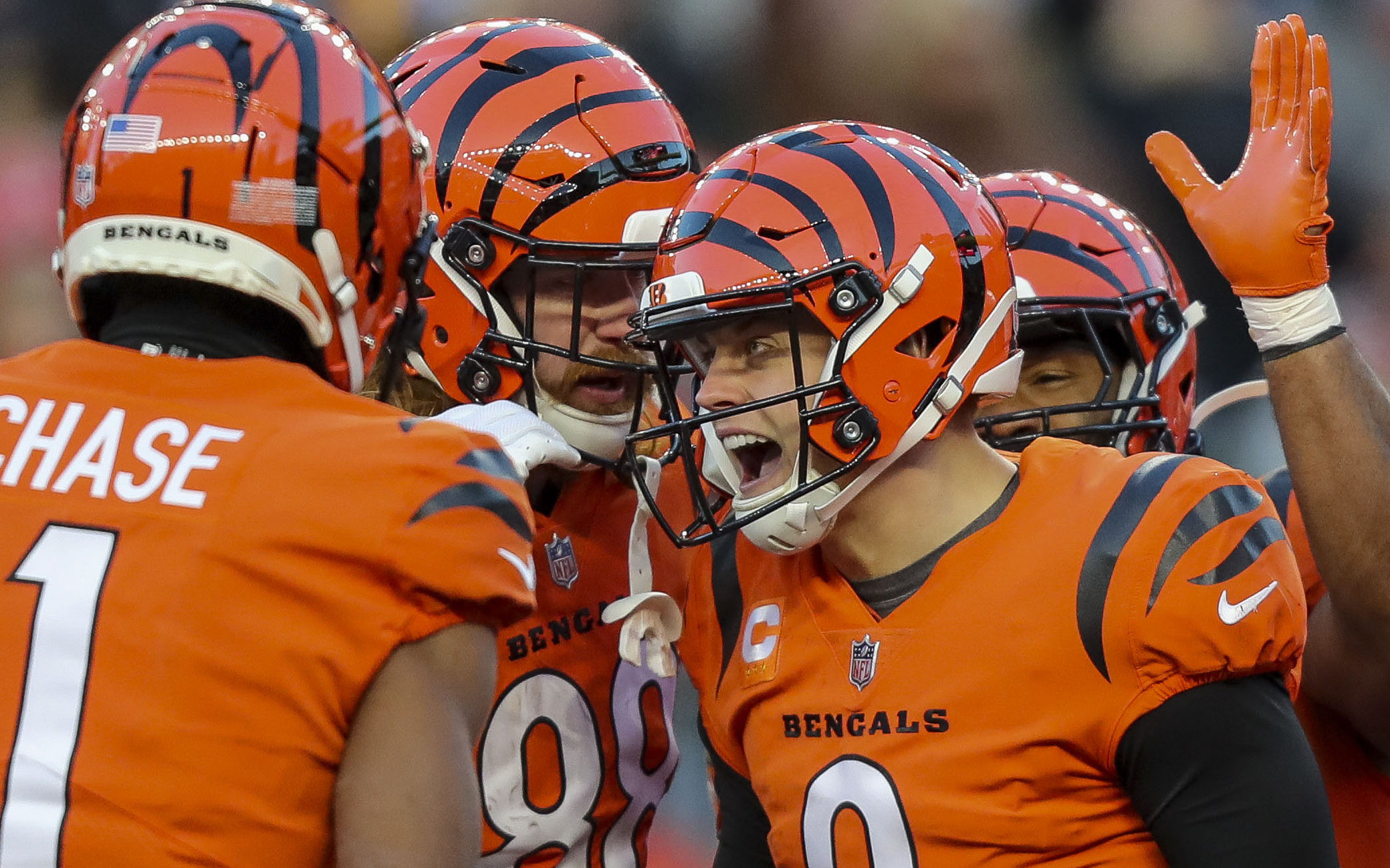 When you look around the NFL landscape, you have to be impressed with the next generation of great quarterbacks on the horizon. Around the league, young QBs are quickly developing into franchise players, and 26-year-old Joe Burrow exemplifies this.

After a massive, unexpected breakout fifth-year senior season at LSU that culminated in a national championship, Burrow went from potential late-round draft pick to first overall. He has not disappointed.

In fact, Burrow has somehow exceeded expectations by following up a Rookie of the Year campaign by taking Cincinnati back to the Super Bowl for the first time since 1988 in his second season.

With his growth on the field and the added experience of his young coaching staff, Burrow has given his organization and community the hope to stay in the championship hunt now and in the future.

Burrow has done all this while taking 117 sacks in 38 career games with the Bengals, more than Patrick Mahomes has taken in 75 games played (114).

However, as Cincinnati heads into the home stretch of Burrow’s third season, there are signs that his offensive line is coming together in both run-blocking and pass protection, turning an already exemplary offense into perhaps the league’s most potent.

The Bengals are on a four-game winning streak, and Burrow is showing that he’s more than just a great young quarterback; he’s one of the game’s elite.

The third-year signal-caller is completing 69% of his passes, a higher mark than both Mahomes (65.7%) and Josh Allen (64.1%). Burrow is also ahead of Allen in yards per attempt (7.8 vs. 7.7) and tied with the Bills’ quarterback in touchdown passes (25). As the Bengals head into a key division game this week against the Browns, the statistics and video validate that he could be headed to the finish line worthy of MVP consideration.

Let’s take a look at 10 things allowing Burrow to continually ascend as one of the best in the game:

Since his senior year at LSU, Burrow has been a master with his footwork under center and in the gun. The Bengals have recently leaned into playing him more in the gun, and he continues to show precision in the relationship to his drops and depths of routes. He is consistently “listening” to his feet – trusting the concept, his reads and progressions, and the coaching that has gone into it. He will also finish progressions that often find a quarterback making the “awkward” throw. In the picture above, Burrow finishes his progression to his running back Samaje Perine by lowering his right shoulder and elbow and delivering an awkward throw.

To be an elite quarterback, you must be accurate. A QB can have all the attributes of greatness, but without the ability to accurately throw the ball from the pocket and on the move, he will never be elite.

When grading quarterbacks, I distinguish between good location and accuracy. I first grade them on location, which I define at a minimum as giving their receiver a catchable ball. An accurate QB delivers the ball so his receiver, if possible, can maximize the run after catch, forcing the nearest defender in man or zone to have to play through the receiver’s body to get to the ball. In the picture above, Burrow places the ball perfectly on the outside digit of Tyler Boyd, allowing Boyd to separate from linebacker Nick Bolton and maximize the run after catch.

The same is true below, where amidst the chaos and penetration in the pocket, Burrow delivers to Chase precisely in stride. I believe that one of the most important jobs for a quarterback is to protect the ball in the pocket, which Burrow might be better at than any QB in the league.

In his career, Burrow has only fumbled four times and lost just one. Three of those fumbles came in his rookie season, once last year, and this season he hasn’t put the ball on the ground a single time

While his coaches have given him great structure, when I watched Burrow play in college, he was always conscious of protecting the ball in the confines of the pocket and showed awareness of blindside pursuit from the defenders around him. When he climbs or moves to his right or left, the ball is always staged high and tight to his chest until he exits the pocket on the move (below).

In the picture below, Burrow is braking his drop and shifting his weight to his back foot with the point of the ball staged tightly to his sternum at the V of his neck. These are excellent, subtle fundamentals that show an understanding of the nuances of the position.

Burrow, when possible, finishes his drop in balance, standing strong in the pocket with a great base and natural transfer of weight to his left side with an open left foot and knee, and his hips working toward the target. His elbow and shoulders are parallel to the ground (below), allowing him to drive the ball accurately to his receiver.

The play below is a universal NFL dropback concept. Every team calls it something different, but I called it a “Branch Concept,” which told every eligible receiver in the formation what to do.

The Bengals’ young coaching staff has given Burrow the structure and protection to do his job. The attention to detail by the outside receiver (above) by clearing and attaching to the corner creates space for the intended receiver who is in the slot. This is a progression-read pass to the slot with hitch (No.1), the shallow (No.2) or the basic (No.3) on a second hitch, and finally the ability to finish by resetting to (No.4) the running back. Burrow can make all the throws from inside or outside the pocket. On this second-and-1 in a two-minute drill (above), again with outstanding detail in pass protection, Burrow explodes and delivers a deep out with accuracy to Chase at the top of the screen.

The protection structure (below) has the tight end and wide receiver chipping the defensive ends (No.8 and No.55) to provide time and space for Burrow to throw a strike that gains 20 yards but travels almost 35 on a rope in the air.

6. Burrow Can See It All

Burrow can change protection when necessary to get the offense into the best possible play.

Lined up in an empty set (below), he sees a six-man box and the potential of the Chiefs bringing one more than protection can handle. He now has a choice if they bring six: run the play called and throw hot to a quick-answer receiver, or bring the tight end in as the sixth protector. The picture below shows two double teams inside and the tight end capably blocking the defensive end.

Knowing that if the Chiefs bring six he will have man-to-man coverage outside, Burrow elects to bring the tight end in so he can take a normal drop and throw the go route to his left to Ja’Marr Chase (below). Burrow does everything right, the protection is there, but unfortunately for him the throw is missed. In the image below, you can see Burrow changing the blocking scheme with hand signals to a seven-man protection with the tight end and running back staying in to block.

The protection (below) allows Burrow to take a normal drop and find an open receiver with time at the bottom of the screen. In the picture below, Burrow recognizes that he must plant and throw with a free rusher off the line of scrimmage to his right. With this play, he throws hot before the free rusher can get home and delivers toward his protection side to prevent a tipped ball. In recent games, the Bengals appear to call the play and run it. Most NFL teams spend a lot of time teaching their quarterback how to manufacture runs at the line of scrimmage to beat the defense, but the Bengals have eliminated that. In doing so, the coaching staff has simplified things for Burrow and the offense.

One way they are doing so is by playing more out of base one-back sets in the gun in both the run and pass. Quarterbacks in the NFL are often stressed to get their teams in the proper run game to make sure perimeter-blocking issues are taken care of.

Burrow is also utilizing the QB sneak when appropriate. On the play below, he sees open space with no defensive tackle shaded in either A gap and audibles to a QB sneak to gain a few easy yards up the middle for a first down.

Burrow is not Lamar Jackson, Josh Allen or Justin Fields, but he is a good runner with strength and more-than-sufficient agility and speed like Justin Herbert. Here, head coach Zac Taylor calls a QB draw at the goal line and Burrow uses his eyes and athleticism to find his way into the end zone.

He also knows when to get down and safely slide, like he does below for a first down.

In the play below, the hard action by Burrow, with the ball extended and his pads down and looking the fake into Perine, has forced the Chiefs’ linebackers up and into the line of scrimmage, leaving space over the middle for a substantial gain.

We see the linebackers sucked in toward the line of scrimmage (below), creating space over the middle.

That space over the middle allows the crossing receiver to come wide open (below). Burrow delivers yet again with high-end accuracy.

9. Burrow Still Has Room to Grow

In the picture below, Burrow forces a go route into double coverage despite the fact that the concept was essentially designed for the receiver to clear space for the deep cross at the 30-yard line or the flare control to the back at the 46, both of which are wide open. Last week at home against Mahomes and the Chiefs, down three points with 7:48 left in the third quarter, Boyd dropped a perfectly thrown fade for a touchdown that would have given Cincinnati the lead. Burrow was not shaken and showed what it takes to be elite by giving his team hope that the game was far from finished. He brought his team from behind in the fourth quarter and shut the door with a quick completion to Ja’Marr Chase on an excellent third-down call by Coach Taylor, who thought about players instead of plays in this key situation.

With a four-game winning streak on the line against a Browns team that convincingly beat the Bengals five short weeks ago, Burrow’s elite status will be front and center. I cannot wait for Sunday.