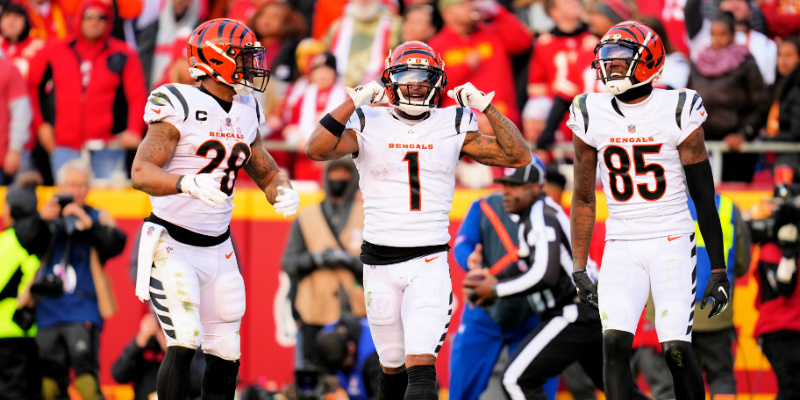 The Titans Offense vs. Bengals Defense

The Titans have a below-average offensive line that has been missing LT Taylor Lewan for weeks. The Bengals have a below-average pass rush. However, Bengals defensive tackle DJ Reader returns, which is a significant boon to the Bengals run defense. Edge rusher Trey Hendrickson is a high-end pass rusher and the best player on the Bengals front. The Bengals have a slight advantage in the run game, while Hendrickson has a unique advantage on the outside against the Titans’ offensive tackles.

The Bengals Offense vs. Titans Defense

The Bengals offensive line is better today than in September, but this is still a below-average group. On the other hand, the Titans have a top-10-level defensive front at full strength with one of the best interior duos in the league. The Titans have an advantage in the trenches here, especially in the interior.

This Is What You’re Betting On in Titans vs. Bengals

The Bengals beat the Titans 19-16 in Tennessee during the divisional round of last year’s playoffs. Tennessee has won seven of its previous eight games. That one loss came against the Chiefs, in Kansas City, by three points with Malik Willis as the Titans quarterback. The Titans haven’t given up 20 or more points since Week 3 against the Raiders. It’s important to mention that the Commanders are the only team Tennessee has beaten with a winning record. You could argue that the Titans’ Thursday night win in Green Bay is their best win of the season. The Bengals have won four of their last five, scoring 30 or more points in each of those victories. The Jets and the Dolphins are the only teams the Bengals have beaten with winning records.

Mike Vrabel’s Titans consistently exceed expectations. Over the past two years, this team has played winning football despite being down multiple starters virtually every week. If you’re betting on the Titans, that’s the foundation of your bet. If you’re betting on Tennessee this week, their potential trench advantage on defense is their most significant matchup edge in this contest. I use the word potential as Tennessee has several key players still on the injury report, specifically both members of their elite interior duo, Jeffery Simmons and Denico Autry. If Autry and especially Simmons are a go, high-end pass rushes have given the Bengals problems all season. Your biggest concern as a Titans bettor is that Joe Burrow shreds Tennessee’s beatable secondary. Your second biggest concern is the Titans still have several significant players on the injury report, and they are playing a dangerous Bengals team this week.

A bet on the Bengals is a bet on Burrow’s high-powered offense. Chase may return to action this week, bolstering the Bengals’ already dangerous passing attack. Bengals defensive tackle D.J. Reader is back, which is significant as Cincinnati is a much better run defense with Reader in the lineup. You want all hands on deck in your run defense when you’re squaring off against the Big Dog Derrick Henry. Cincinnati has been a good team defense over the last two seasons, so they are well-positioned to keep the Titans offense right around expectations. Your biggest concern with a Bengals bet is Cincinnati’s still below-average offensive line draws the Titans difference-making front.

In general, each of these teams has one significant advantage. The Bengals have their pass catchers against the Titans’ pass defense. The Titans have their defensive front against a Bengals offensive line that has struggled against premium pass rushes.

Winner/ Confidence Pool: I play in several winner pools, so I’ll get some exposure to the Titans here, but I’ll play the Bengals more often in that format. I will treat this game like a true coin flip in my confidence pool rankings.

Spread Pool: I have a slight lean towards the Bengals side ATS, but I don’t expect to play this game directly.