The NFL’s annual coaching carousel carries a high price tag, but that doesn’t prevent the changes from coming.

ESPN reported last month that owners have spent $800 million on fired coaches and front-office executives during the past five years alone. The lack of staying power is bore out in the fact there are only five current NFL head coaches, who were hired before 2017. As one former coach once said: NFL coaches are hired to be fired. It’s just the reality.

Ten jobs came open last year, but we’ll likely end up with roughly half as many this year.

Here are potential candidates for the upcoming coaching cycle: The former New Orleans Saints head coach has spent this season with FOX Sports as a studio analyst, but there’s a strong belief he’s ready to come back to coaching if the situation is right.

It’s important to note the Saints still own his rights, so any team interested in Payton would have to trade for him, and the asking price will include steep draft capital and a lot of money. Remember, the Buccaneers traded two first-round picks, two second-round picks and $8 million to the Raiders for Jon Gruden in 2002.

Some around the league believe the Saints traded their 2023 first-round pick last year knowing they’ll likely be able to recoup one in a deal for Payton. Their season did not go as expected, and in hindsight they might want that trade with Philadelphia back. (The Saints dealt the No. 18 overall pick and two others in 2022 plus their 2023 first and a 2024 second for Nos. 16, 19 and 194 in the 2022 draft.)

Payton won’t just go anywhere: Ownership, front-office structure, and quarterback situation all will be important factors in his decision. Harbaugh’s name comes up every year, and the reality is it won’t stop.

His buyout as Michigan’s head coach reportedly is $3 million, and this is a year when he likely will have multiple teams interested. He spoke to only one last year, the Minnesota Vikings, and didn’t get the job.

He did, however, get a five-year, $36.6 million extension from Michigan. This year, the league’s two wealthiest owners (Broncos’ Rob Walton and Panthers’ David Tepper) have openings, and a team he played for (the Colts) also has an opening.

Harbaugh could use those teams as leverage in contract talks with Michigan again, or he could make the jump back to the NFL, where he was 44-19-1 as the 49ers’ head coach from 2011-14, leading San Francisco to the NFC Championship Game three times and a Super Bowl appearance in 2012. 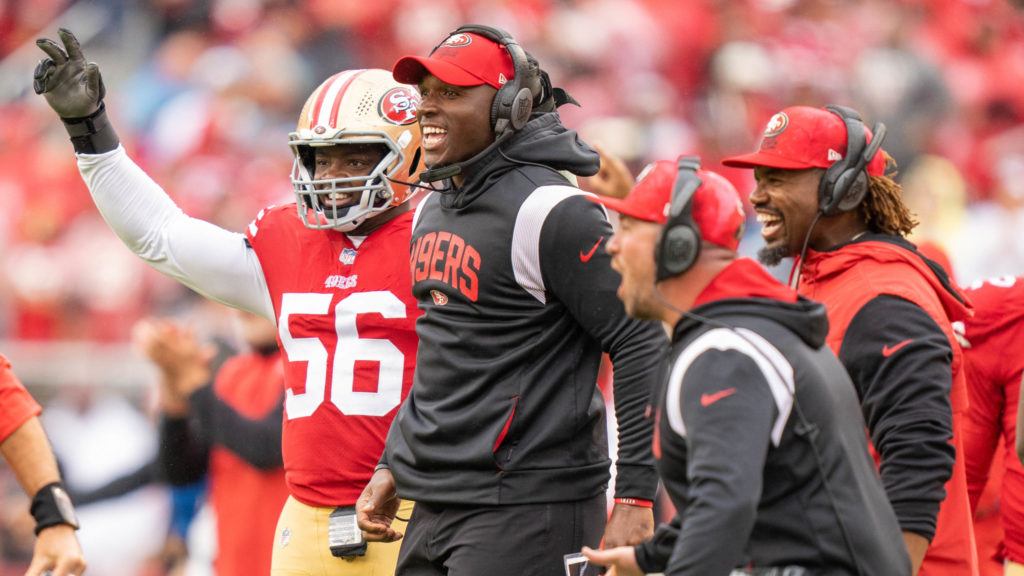 Ryans interviewed for the Minnesota Vikings’ opening last year and was a finalist for the job after an impressive first interview. In an unexpected twist, Ryans opted not to take a second interview, telling the Vikings he felt he needed more time to develop as a coach.

Ryans’ defense is again among the best in the league. Through Week 17, the 49ers have allowed the fewest points per game (16.5) and the second-fewest yards (303.4). They did not allow any second-half points in three November games, and they allowed no points in 16 of the 36 quarters during their nine-game win streak. Players have praised Ryans for how he leads and gets them into the right mindset.

The former Falcons coach has re-established himself in Dallas while serving as the Cowboys’ defensive coordinator. He was a popular candidate last year, getting interview requests from six teams. Since arriving in Dallas in 2021, the Cowboys rank first in takeaways (66), fourth in sack rate (7.5%) and seventh in opponent scoring (20.5 points per game). After another successful year, Quinn again should be squarely in the mix in multiple locations.

Johnson probably has been the most rapidly rising star on this list, going from the Lions’ tight ends coach in 2021 to the offensive coordinator in 2022. The 36-year-old has guided the Lions to a top-10 offense in almost every category, including fourth in points per game (27.1) and third in yards (383.6). The offense’s production has Detroit in position to make the postseason in the final week of the season. Johnson fits the mold of the bright, young offensive mind many owners want as a head coach. The Bengals’ offensive coordinator has worked with some of the top quarterbacks of recent times. Callahan was with Peyton Manning during his time with the Broncos, and he was Lions’ quarterbacks coach with Matthew Stafford Raiders QB coach with Derek Carr. Callahan also has been an integral part of the high-powered Bengals offense for the past two years. Callahan doesn’t call plays, but he plays a major role in game planning for a team that is eighth in points per game (24.4). Just 38 years old, Callahan interviewed for the Broncos’ job last year and should be in line for more interviews this year.

Wilks had a bit of an unfair shake in his first head-coaching stint with Arizona, lasting only one year in an awful situation. He bounced around after that and eventually found his way back to the NFL in 2022 when Carolina hired him as its Defensive Pass Game Coordinator/Secondary. He was promoted to interim head coach after Matt Rhule was fired after a 1-4 start.

Panthers owner David Tepper said Wilks can earn a job permanently if he does an “incredible job.” Wilks has an argument that he’s done just that. Despite a revolving door at quarterback and the team trading away key players such as receiver Robbie Anderson and running back Christian McCaffrey, Carolina turned its season around and wasn’t eliminated from playoff contention until a Week 17 loss. Several Panthers players have spoken highly of the work Wilks has done and have endorsed him to be their full-time head coach.

Tepper could look for a flashy hire, but the blueprint for this situation came up last year with the Raiders: Las Vegas made the playoffs with interim head coach Rich Bisaccia and players publicly endorsed him for the full-time gig – only to see the team hire Josh McDaniels and regress. The Broncos’ Evero-coordinated defense was one of the lone bright spots in what ended up being a very difficult season for Denver. His defense held opponents to less than 20 points in nine of its first 10 games. Evero came from the Rams, where he was one of Sean McVay’s first hires in 2017 and served as the defensive passing game coordinator for the 2021 Super Bowl champs.

Other names to keep an eye on