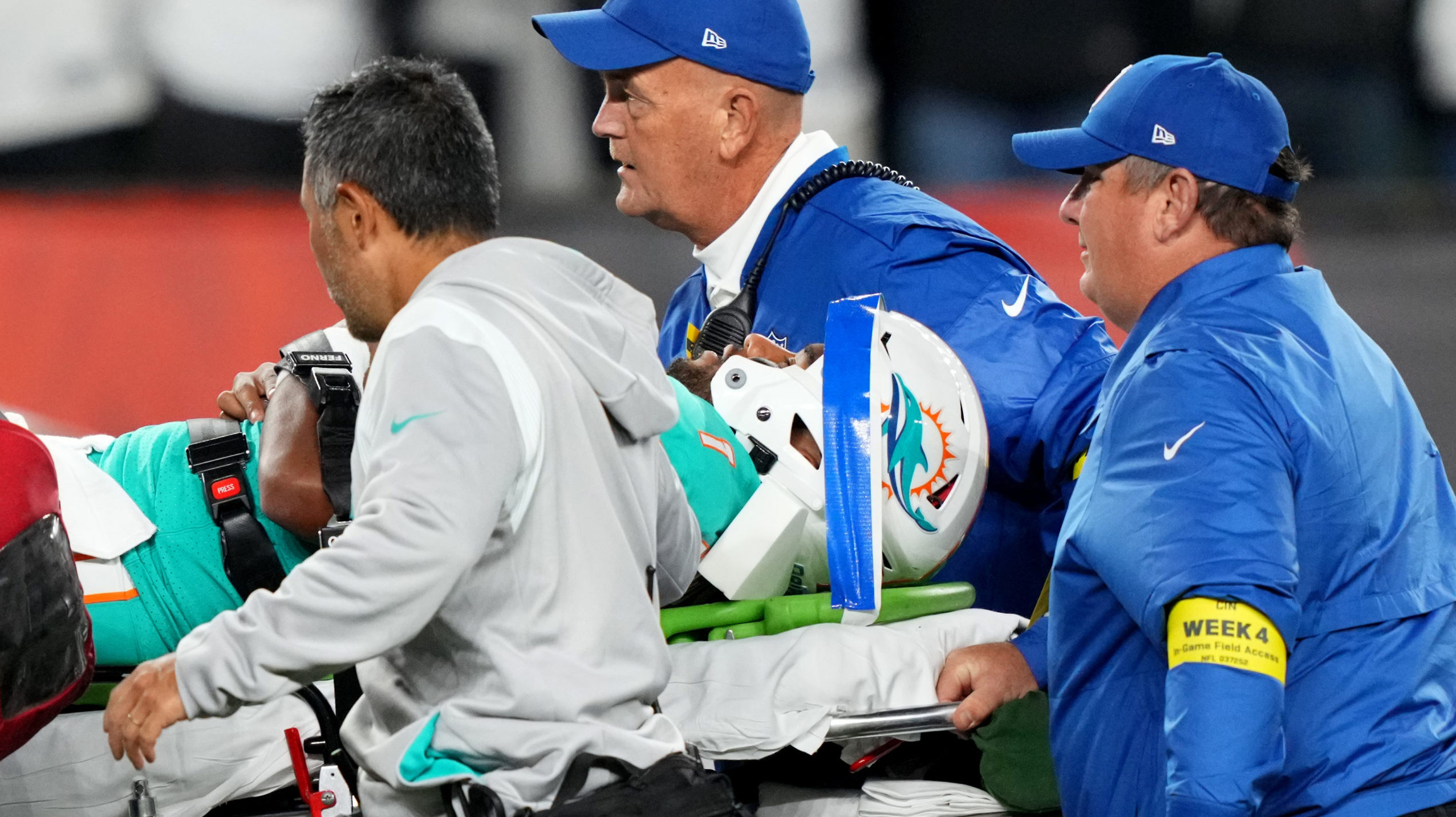 Passionate, sometimes heated, commentary has risen regarding Tua Tagovailoa’s almost immediate return to action for the Miami Dolphins after his injury just before halftime against the Buffalo Bills two weeks ago.

His clearance to play against the Cincinnati Bengals four days later and the stomach-turning image of him lying semi-conscious on the field created a national conversation about the NFL’s Concussion Protocol and its implementation.

Most of this discussion has been sincere and well-meaning. A fair amount of it misses the significant details that drive the protocol. A small part of the talk is led by the belief the NFL and its teams really don’t care about the well-being of their players beyond their utility on the field.

Nothing could be further from the truth.

Commissioners Paul Tagliabue and Roger Goodell, along with Chief Medical Officer Dr. Alan Sills, who leads the NFL’s league-wide medical policy, development and implementation, have for more than a decade made concussion prevention, diagnosis and treatment Job 1. Dr. Sills is an accomplished concussion expert and a crusader for playing rules, helmet development and practice rules and procedures that have made great strides in lowering the incidence of concussions.

Because of their efforts, and partnership with the NFL Players Association, the game of football has never been safer. Concussion research, diagnosis and treatment have advanced exponentially, with positive results at every level from Pee Wee to the NFL. The league has mandated baseline cognitive testing for all players and instituted playing rules, such as defenseless player protection and prohibiting the use of the helmet as a weapon.

In partnership with the NFLPA, the Concussion Protocol is updated every year based on new science and technology. It’s aggressively monitored by the league office and the players’ union. An example of positive steps in technology is the Hawkeye video system now installed in each NFL stadium. It provides a much clearer image and broad-based coverage than what we see on television. The doctors involved in the concussion diagnosis are obligated to look at this video, which is installed on the sideline, as part of their testing process.

As a former general manager, I can tell you, unequivocally, my No. 1 concern every time our team took the field was injuries, period. If we had a good, well-coached team, the score would take care of itself. Injuries were the unknown that could derail everything we planned for and worked on. We pay millions to our players. They are the reason we win or lose. It’s absurd to think any club would not do all they could to keep their players healthy and, when injured, get them as ready as possible before putting them back on the field.

Hall of Fame coach Marv Levy is my mentor. The vast majority of what I know about pro football comes from him. One of the most important lessons he taught me was a starter at 80% efficiency, because of injury, cannot be as successful as his backup at 100%. Throughout my time as a GM, I always instructed our medical department to keep that axiom in mind. We never played players who couldn’t perform at a high level of competency, both for their own well-being and for the teams.

In the case of any injured player, be it Peyton Manning or someone just off the practice squad, the team doctor decided who played and who didn’t. Neither the coach nor I had any say in the matter. The only role the coach and I played in these circumstances was occasionally holding out a medically cleared player if we felt he needed more practice time to reach top-flight efficiency.

I can’t speak to anything but my own experience, but in nearly four decades in pro football, I never witnessed a team doctor that deliberately put a player at risk in order to help the team win. Unfortunately, mistakes and misdiagnoses happen, though they are rare.

Today, we are better prepared to make the correct diagnosis because of a plethora of technology. In Indianapolis, our policy was for a player to return from injury, he must be cleared medically with no chance of making the injury worse. The strength and conditioning department needed to attest he was at a 100% conditioning level and was ready to go for a full game. Both benchmarks had to be met, or he was a “no go.”

I am also aware the “players want to play” axiom you heard annunciated on television by many players-turned-analysts last week is entirely true. For any number of reasons, players often understate or fail to report injuries. We were all raised with the saying, “You can’t make the club in the tub.” That ethos is no longer applicable. There were multiple former players on TV alleging they and others deliberately failed their baseline neurological screening test in order to set their bar artificially low so that in a concussion test, they would have a better chance of passing and continuing to play.

Do I believe this happens? Yes, though I have never witnessed it. Do I believe that players can “rig” Concussion Protocol procedures? No. It’s far too extensive and sophisticated. Do I believe that we, as GMs, coaches and most of all the medical staff have an obligation to protect players from themselves? Yes, unequivocally.

Since joining the media, I stay up to date on medical issues by checking with trainers and team physicians during my visits to training camps. In addition, I read the vast majority of public information put out by the league. That said, let’s look at an overview of the Concussion Protocol:

1. Personnel: There is a certified athletic trainer schooled in concussion symptoms stationed in the press box. If he or she spots a player, such as Tagovailoa, who is wobbly, disoriented or otherwise exhibiting signs of a concussion, that person will call the field and have the player removed from the game. Once removed from the game, the testing process begins. The testing is done by the team physician and a neutral neurotrauma physician called the unaffiliated neurotrauma consultant (UNC for short). The UNC is vetted and chosen jointly by the NFL Head, Neck and Spine Committee and the NFLPA doctors.

2. Testing: An initial test is administered in the medical tent on the sideline. If the results do not clear the player, he is taken to the locker room and a lengthier test is administered by the team physician and the UNC. Among other things, this test measures immediate recall, long-term recall, spatial awareness, physical balance and personality alteration.

The results are compared to the player’s baseline test. There is a locker room legend that players can and do practice for this test in order to keep playing. I find that very hard to believe. Just repeating words and numbers forward and backward would stump me now, much less in a random nature in a stressful gameday environment. If the player passes this test, he may be cleared to return to play that day with one caveat: If he has displayed gross motor instability, such as Tagovailoa clearly did. Then, he may only be cleared if there is evidence the gross motor instability was caused by something not neurologically related.

The administration and implementation of this part of the test is one of the central issues in the Tagovailoa investigation. If a player fails the locker room test, he is removed permanently from the game and placed in Concussion Protocol. In my experience, it was rare for a player exhibiting symptoms to return to play in the same game he was removed from. The test and the doctors were rarely wrong.

3. Benchmarks: These are among the benchmarks a player placed in the protocol must meet to return to play.

In my experience, this process almost always takes a week or more. If a player is “in the protocol,” he’s almost sure to miss the following week’s game. Had Tagovailoa been placed in the protocol, based on the gross motor instability he so clearly displayed, it’s unlikely he would have been cleared in time to travel to and play in a game four days later.

The NFL and NFLPA have begun a joint investigation into the Tagovailoa incident. Already, the UNC in Miami has been dismissed and word has circulated the so-called loophole for non-neurological cause will be removed from the gross-motor-instability standard. That might result in some players who are exhibiting concussion-like symptoms getting removed from games even though they aren’t actually concussed. Both the players and the NFL will have to decide if they are willing to pay that price in order to protect players from themselves and have more positive optics surrounding the issue of concussions.

On Friday morning, I called my esteemed former colleague and friend, Hall of Fame coach Tony Dungy. We talked about the Tagovailoa incident and its shocking visuals. We also discussed how Tagovailoa’s subsequent injury might have been affected by the three-day preparation period for their Thursday night game, and ultimately discovered we had independently come to the same conclusion. Regardless of the doctors’ clearance of Tagovailoa, we would have strongly considered holding him out.

With only three days between the incident and the game at Cincinnati, discretion might have been the better part of valor. There are 13 games left in the season. He is the most important player on the Dolphins and having him healthy in the longterm is more important than any early-season game. In the end, we wouldn’t have made a definitive decision without knowing all the medical details. I wonder, however, if the Dolphins considered that option.

Thankfully, Tagovailoa appears to be in good shape. The investigation, the results of which Dr. Sills promised would be made public, will tell us a great deal. Both the league and the NFLPA have pledged to make an already successful concussion policy more effective. As you read this, they have already taken significant preliminary steps toward that end.

Coach Mike McDaniel handled himself admirably. He is representative of a new generation of coaches who seem to be squarely behind the principle of letting the doctors decide, based on medical facts, who plays and who doesn’t. That is a good thing. Most important is that Tagovailoa continues to progress and gets back on the field as early as the protocol will allow.

If improvement to the concussion policy comes from this national conversation, it will ultimately be good for the game at every level.

WATCH MORE: Golden Tate on Why Players Play Through Injury