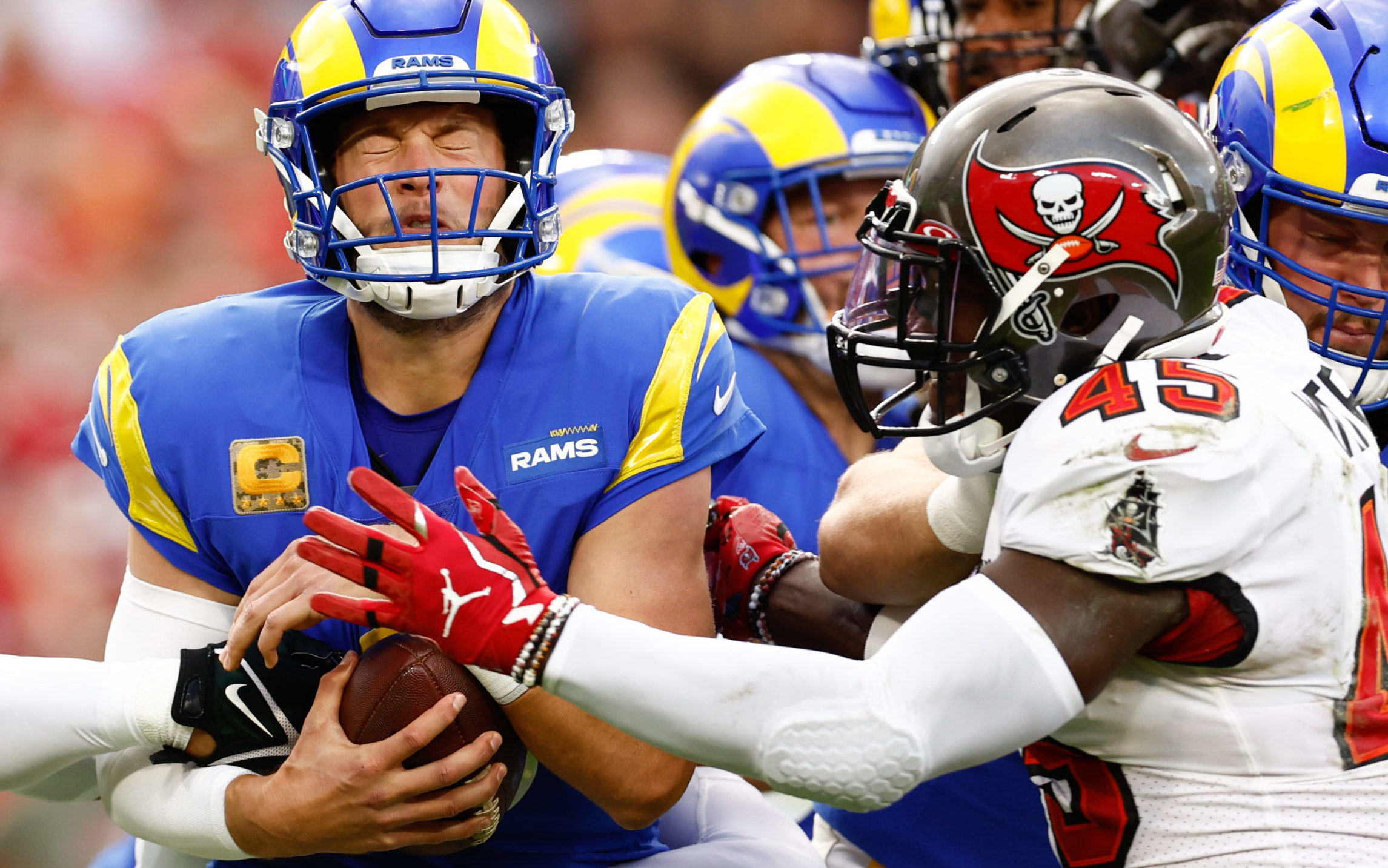 Since everyone in the NFL has played at least nine games, let’s look half-season trend that tells an interesting story.

After checking sacks statistics, I was shocked to find there are 15 quarterbacks who have taken 20 or more sacks in only half a season. That’s a troubling number. It’s more than two per game.

Without going through every sack of every quarterback in this group, it’s impossible to pinpoint the exact reasons, but substandard pass protection is surely a contributing factor. Holding the ball too long and/or slowly processing through progressions can also be factors. Unfamiliarity with new offensive concepts and receivers is clearly an issue with Matt Ryan and, to some extent, Marcus Mariota and Aaron Rodgers.

Whatever the cause, it’s clear the yardage lost sets back offenses and, in most cases, hurts overall efficiency. We also must consider the physical beating numerous sacks can deliver to the quarterback.

We decided to examine the quarterbacks who have taken 20 or more sacks, their average yards loss per sack, the number of interceptions thrown, their passer rating and their teams’ win-loss record to see if there was any correlation. The following are the raw numbers, by quarterback, in order of the sacks taken. (It should be noted quarterbacks should be targeting two or fewer sacks per game and a passer rating of 90 or higher to maximize their team’s chances of winning):

The most interesting number is almost half of the league has taken 20 or more sacks in half a season. In the words of Vince Lombardi, immortalized on NFL Films, “What the hell is going on out there?”

The Consequences of Fewer Practices

One theory espoused by many coaches is because of the 2011 collective bargaining agreement between the NFL and the NFL Players Association, fewer coaching and practice opportunities are available for offensive linemen. One thing we know for certain is the 2011 CBA eliminated one-on-one offensive lineman vs. defensive lineman drills during OTAs and two-a-day practices during training camp.

It also reduced the number of padded practices allowed during the regular season. In addition, in the last two preseasons, we have eliminated the fourth preseason game. Bill Parcells, the Hall of Fame coach, once said, “The only way to teach offensive line play is with pads, helmets and contact.”

The reduction of these contact coaching opportunities and repetitions was done with safety in mind. That is a good thing. Young offensive linemen, however, need development in order to learn how to keep a team owner’s most important investment, the quarterback, upright and in one piece.

At the college level, offensive linemen do not see the quality of rush men they must deal with in the NFL. Basic numbers tell the tale. There are about 105 Division I collegiate programs, of which 60 or so are in the so-called Power 5 conferences where the top talent congregates.

There are only 32 NFL teams that employ only the top rank of collegians. That is why, for an offensive player, the toughest transition from college to the NFL is on the line. We will look at some suggestions to help solve this problem in future columns.

Making Sense of the Data

Among the most-sacked players, only one with a QBR lower than 90 has a winning record. That’s Cousins at 87.0. Only six of the 15 have winning records. They are Burrow, Jones, Smith, Hurts, Jackson and Cousins.

Five had the fewest interceptions. Burrow and Jackson have six each, Jones two, Hurts three and Smith four. Again, the outlier is Cousins with eight.

Among those with winning records, Burrow is the most sacked with 30. He’s followed by Jones with 28, Smith with 24, Hurts with 22 and the tandem of Cousins and Jackson with 20 each.

The reasons for the reduced average sack yardage by the rest of the group are obvious. On some designed quarterback runs, they are tackled behind the line of scrimmage, which is counted as a sack. Most of their efficiency, however, is because they can make the first rusher miss, then scramble, thereby mitigating yards lost even if the rush gets to them.

The picture is clear. If you want to win, not only do you want a quarterback who generates a high passer rating by throwing more touchdown passes than interceptions, but you’d better protect him. If you don’t, bad things happen far too often.

As an example, a high-ranking Colts official told me last week, before Jeff Saturday’s head-coaching debut against the Raiders, “Jeff has energized the offensive line. Don’t be surprised if we win this game.” Ryan was injured because of, arguably, the worst protection in the league. He returned to action last Sunday with an invigorated O-line in front of him and had his best day of the season.

Jeff’s mentor when Jeff played center for the Colts, the late great Howard Mudd, preached from Day 1of OTAs: “Protection is Job 1!” Given what trends have shown so far, those words should serve as an important reminder for every team in the league.