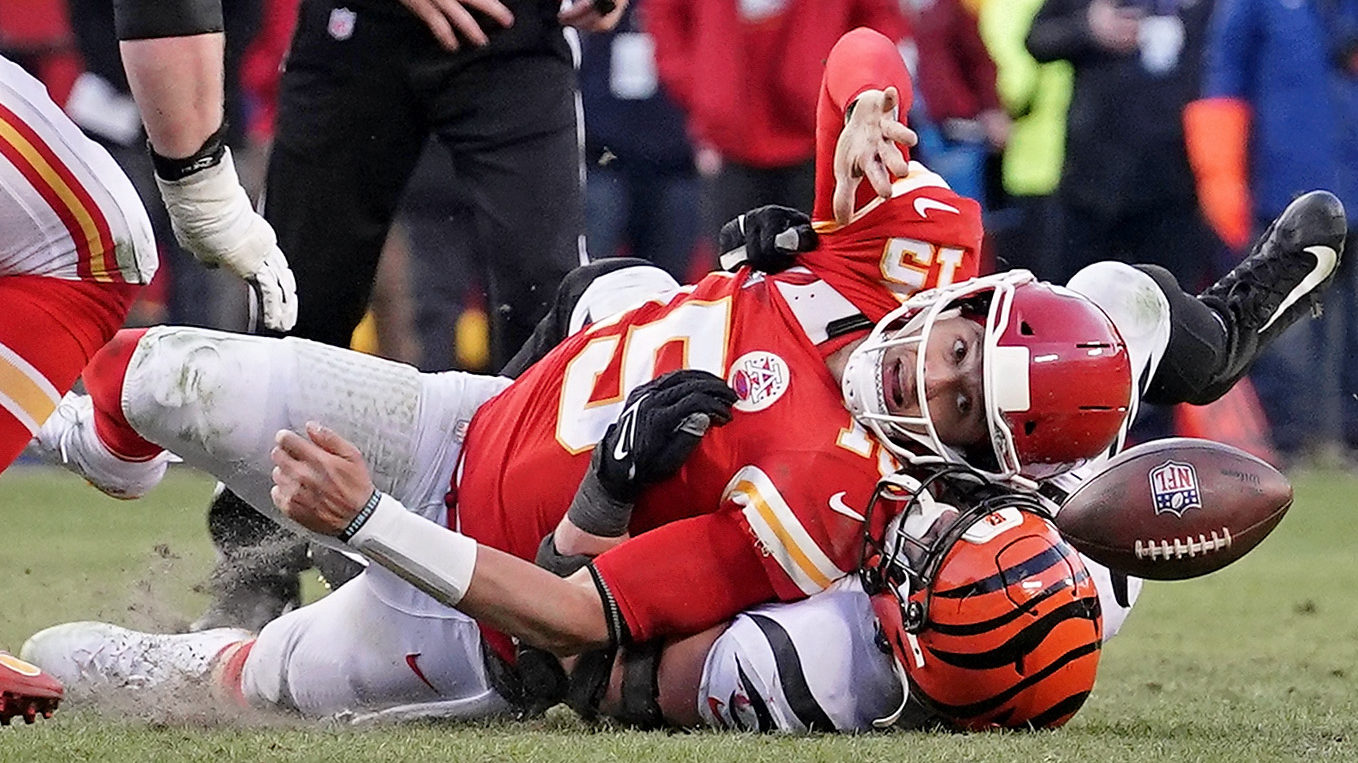 As I look ahead to Sunday’s conference championship games, it brings back the best and worst memories from my NFL front office career in what I considered the most pressure-filled game of the NFL season.

I’ve always believed NFL conference title games rise above the Super Bowl in magnitude from a team executive’s perspective because a loss in this round denies the dream of a Super Bowl trip for your team and wastes a ton of prep work in advance of a possible Super Bowl week.

That dream is on the line for the Eagles, 49ers, Chiefs and Bengals on Sunday. Losing one game short of the Super Bowl is excruciating.

My teams played in four NFC Championships and two AFC title games. We won twice (1976 Vikings, 1999 Titans) and lost four times (Vikings in 1977, 1987 and 1998, and Titans in 2002). It was sad to lose the two Super Bowls we played in, but it was definitely more painful to lose in the NFC and AFC Championships, especially the Vikings’ overtime loss to Atlanta in 1998 after our NFL-best 15-1 regular season.

Winning the AFC or NFC title game means far more than the $89,000 each player, coach, most team presidents and general managers are guaranteed for playing in the Super Bowl (with a shot at another $75,000 with a Super Bowl victory in Glendale, Ariz., on Feb. 12).

The vast majority of teams — especially those with playoff hopes — usually say prior to the season: “We want to go to the Super Bowl” or “We want to be a Super Bowl team.”

Once you’re there, you absolutely want to win the Lombardi Trophy, but reaching the Super Bowl is still a huge accomplishment for all associated with the team, especially for those players, coaches, team executives and staff members who have not been there lately … or ever.

There is a glow about the franchise as fans clamor for Super Bowl tickets and travel packages. It sets up the organization to cash in with ticket price increases, booming sponsorships and more suite sales. Prime-time games abound in the following season, which adds excitement. This year’s remaining foursome is somewhat unusual in that every team has been to the Super Bowl in the past five years (Cincinnati last year, Kansas City after the 2020 and 2021 seasons, San Francisco in 2019 and Philadelphia in 2017).

But they’ll probably be just as thrilled as I was to get to the Super Bowl with the Titans in February 2000 after a 23-year wait since my prior Vikings trip.

All four teams have to make enormous logistical preparations this week for a potential Super Bowl, which is another reason a loss on Sunday will be devastating. The teams are preparing books for all members of their organization with every detail of Super Bowl week, and the books are either distributed or tossed out depending on Sunday’s result. Plans will be in place for Super Bowl ticket allotments to players, coaches, staff, season ticket holders (via a lottery), team sponsors and VIPs.

The teams are sending three or more staff members to Arizona this week for several days of meetings with NFL staff to review practice facilities, hotels, meeting rooms, computer and video setup, family activities, ground transportation, press-conference arrangements, post-game party plans, Super Bowl events and allotment of tickets (such as the Commissioner’s Party on Friday night and the Tailgate party on game day).

For two of the teams, all of this necessary prep work will have been for naught. I know that feeling. In 1987, I was in charge of the Vikings’ team travel and logistics and did all the prep work only to see it fall by the wayside with our NFC title game loss in Washington.

The Pain of Loss

Then with the Vikings in 1998, I went through the Super Bowl preparation with our staff after our 15-1 regular season made us the No. 1 NFC seed and things ramped up with our divisional playoff win against Arizona. We had the books printed for the players, coaches and staff that went over all pertinent Super Bowl details. We had our travel arranger ready to go with fan packages to Miami.

My daughter had to miss the NFC title game due to a basketball tournament, but she wrote me a note that morning: “Sorry to miss the game, but good luck, and I know we’ll be goin’ to Miami.” That made what followed even more painful. Losing that NFC Championship in my final season with the Vikings was the toughest loss of my career. We were 11-point home favorites against Atlanta. The Metrodome was rocking as the fans anticipated the Vikings’ first Super Bowl trip in 22 years. We had one of the NFL’s top offenses ever: led by MVP quarterback Randall Cunningham, rookie of the year Randy Moss at receiver along with All-Pro Cris Carter and Jake Reed, plus Robert Smith running behind an excellent offensive line. The defense was led by Hall of Fame defensive tackle John Randle.

We were up by seven points with two minutes to go when our Pro Bowl kicker Gary Anderson — who went 35 for 35 on field goals in the regular season and was 4 for 4 in the playoffs — barely missed a potential game-winning kick wide left from 38 yards. As we watched in shock and horror from our silent management box, the Falcons drove for the tying touchdown and won, 30-27, in overtime on Morton Andersen’s field goal.

I’ll never forget the utter misery in our locker room after that game. Helmets were thrown, tears were shed and the Super Bowl trip to Miami was down the drain. It was the sickest feeling I ever had after a game.

When was I ever going to get to a Super Bowl again, if not with that team? In my rookie season with the Vikings in 1976 — with Hall of Famers galore, led by coach Bud Grant, quarterback Fran Tarkenton and the Purple People Eaters on defense — we beat the Rams in the NFC title game at sub-zero Metropolitan Stadium. It was on to Pasadena and Super Bowl XI. That was a thrill despite our loss to Al Davis and John Madden’s Raiders, but I was just a 23-year-old assistant public relations director.

I soon learned how tough it was to win that conference championship game as we lost in Dallas the following year. Ten years later, our 1987 Vikings won road playoff games as underdogs in New Orleans and San Francisco (over the top-seeded 49ers of the Walsh-Montana-Rice era) before falling, 17-10, in Washington. It was a heartbreaking loss that ended with an incomplete pass in the end zone on our final play.

I’ve always known that life in the NFL is a rollercoaster ride. From the lowest of lows with the ’98 title game loss in Minnesota, I found myself back in the pressure cooker of a conference championship game a year later. This time on the AFC side after my move to Tennessee.

We had a special team and season with coach Jeff Fisher, quarterback Steve McNair, running back Eddie George and rookie of the year defensive end Jevon Kearse leading the way. This was the first season in Nashville at the new downtown stadium. We went 13-3 in the regular season (finishing second in the division to Jacksonville), then had a wild-card win against the Bills in the Music City Miracle game, followed by a divisional-round win against Peyton Manning’s Colts in Indianapolis. Then we came from behind to win the AFC title game against the Jaguars.

On our team charter back to Nashville, we were told there were 50,000 people waiting at our stadium, on a freezing night, for a victory celebration. Super Bowl week was so exciting as I had close to 40 family and friends in Atlanta. The loss to the Rams in Super Bowl XXXIV was painful, especially after our second-half rally fell 1 yard short when receiver Kevin Dyson was tackled just shy of the goal line that would’ve sent the game into overtime.

But we made it to the big game. And that was far better than coming up one game short, as happened to me on four occasions and will happen to two of the teams this weekend. I will empathize with the losers and fully appreciate the joy of the winners.

Jeff Diamond is a former Minnesota Vikings general manager and Titans team president. He was selected NFL Executive of the Year after the Vikings’ 15-1 season in 1998. Follow him on Twitter at @jeffdiamondnfl.