After being touted as the next great NFL quarterback from his high school days through his tremendous career at Clemson, Trevor Lawrence went through some unexpected turbulence across his first two seasons as the starter for the Jacksonville Jaguars.

Some of last year’s struggles were due to coaching and some were simply due to reckless play or lack of situational awareness. It was evident he was trying to do too much for a 3-14 team shrouded in controversy.

Though he showed positive flashes in his 2021 campaign, he also suffered through growing pains and erratic performances, ultimately, completing less than 60% of his passes with a 12:17 TD: INT ratio.

Across his last three games in 2022, however, Lawrence has completed 77.2% of his passes with six touchdowns and zero interceptions.

While the Jaguars have still struggled to a 4-7 record this season, it is clear after last Sunday’s late game-winning performance against the Ravens, new coach Doug Pederson has his team headed in the right direction.

A 10-play, 75-yard, game-winning drive culminating in a two-point conversion to beat Baltimore may be the spark that changes the trajectory of Lawrence’s career and the Jaguars’ franchise.

Let’s take a close look at how Lawrence and company knocked off the Ravens with a drive that illustrates many of the young quarterbacks’ strengths, and some of the weaknesses he and the Jaguars must overcome. On this play, and for most of the drive, the offensive line created space and kept Lawrence clean allowing him to see the intended receiver and step into his throw, as shown below.

On second-and-10 with one minute and 51 seconds on the clock, Pederson dials up another great play used to give the quarterback an answer against two-deep shells or three-deep coverages.

As the Ravens roll into three-deep, Lawrence should bring his eyes to his right. Instead, he looks left and slides left into his protection rather than working in the pocket.

While I’m not in the QB room, I think Lawrence misread this. His eyes should be to the right, taking either the hook runner on top at the 35-yard line or moving onto an open RB JaMycal Hasty on his wide route at the 20.

Lawrence made the mistake of not climbing a well-blocked pocket, causing a fumble that would have ended the game if starting center Luke Fortner had not fallen on it (below).

NOTE: On the first two plays of this all-important drive, Lawrence earns two “minus” grades.

On third-and-21 with one minute and 44 seconds left, the Jaguars go to a tight formation to chip the defensive ends and neutralize the pass rush in order to throw three hook routes up the field. This is another excellent call from Pederson that leaves all three upfield receivers open.

You can see the triangle of the five receivers stretch the field horizontally in the picture below. Lawrence drives a strike down the middle to Christian Kirk for a 16-yard gain, which leaves the Jaguars in a manageable fourth-and-5 (below).

Facing fourth-and-5 with one minute and 29 seconds to play, the Ravens show a pre-snap Double A all-out blitz look (below). 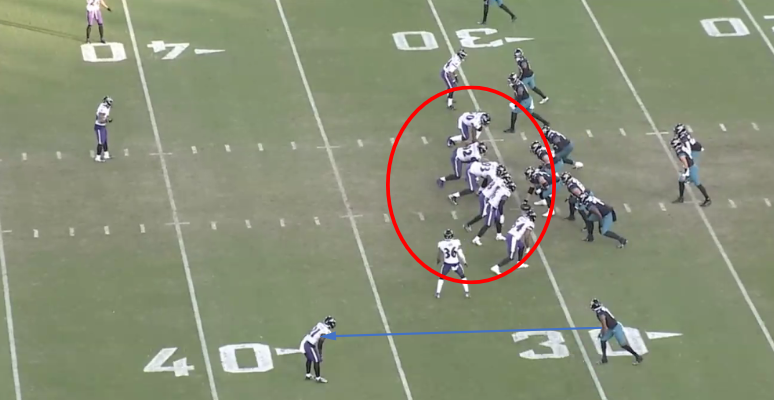 Lawrence backs out at the snap to throw the “quick answer” out route at the bottom of the screen (below) to WR Marvin Jones Jr. Several defenders drop out at the snap and the Ravens rush only four.

Lawrence’s last steps (below) are too big, but with his high-end arm talent, he throws off his back foot and releases the ball before Jones brings his head and eyes around. This is a tremendous throw by a young quarterback under the most difficult of circumstances.

What must be noted once again here (below) is the communication of the OL to assess the front and the alertness of  Hasty to find his blocking assignment and get a piece of LB Patrick Queen, enabling Lawrence to complete the throw.

With first-and-10 and one minute and seven seconds remaining, Lawrence is again given great pass protection and takes a good drop. He finds the single-covered WR Jones but overthrows him. This is a simple throw-and-catch for an elite NFL player with this kind of protection. Trevor could arguably have tightened his drop to be ready to throw a click earlier, but at the end of the day, he doesn’t finish the throw and it ends up high and overthrown (below). On second-and-10 with one minute and three seconds remaining, Pederson delivered another great call, giving Lawrence everything he needed in the route structure to find a completion. Because this is a shell coverage with only three underneath defenders, Lawrence takes a precise three-step drop and a hitch before firing over the middle to Kirk for a 17-yard gain and first down. Once again, you cannot say enough about the excellent pass protection from the OTs on Baltimore’s DEs, and the decisiveness by the center and both guards picking up the twist inside. This is a beautiful play to watch from a schematic and execution perspective.

With 44 seconds remaining on a first-and-10 call, Lawrence sees the weak safety rotating weak, so he immediately starts to the field side, where he has three receivers running vertical routes with outside receiver Jones running a square out (below).

Because he is running only a 10-yard route, Lawrence is late on the throw because he hitches first. This also could be a product of reading the play from the inside out, where Jones is not the primary. In any event, the pass is complete for a gain of 8 yards.

Once again, while everyone in the house knows they are throwing the ball, the offensive line (above) does an impeccable job of establishing a firm pocket inside with the center and guards, and width outside by the tackles blocking the DEs.

On second-and-7 after a pre-snap penalty, this call is a universal two-minute NFL concept, working a vertical stretch up the sideline with a deep corner, shorter corner and a flare control RB in the flat (below).

With the strong safety high and the corner staying deep (above), Lawrence uses patience and discipline to kick the ball to the free-release RB, Hasty, in this five-man protection play to the flat.

Again, Lawrence has a clean pocket to complete a throwing motion. The throw is high and forces Hasty to wait on the ball. The Jaguars don’t get much out of it, but with two more downs, they stop the clock.

On third-and-6 with 36 seconds on the clock, Lawrence makes the throw of the game. This play is another universal NFL concept with the outside receiver running a go route, primarily to clear for the corner route by the inside receiver (below).

It should be noted during this drive, Pederson continued to change formations in order to call his best plays. I should also note the design of this play is not to throw the go route into a soft corner and a shell safety.

Yet, from the beginning of the drop, the second-year quarterback made up his mind to commit to this throw.

Because of his arm talent, the throw beats CB Brandon Stephens over the top, and the safety working to collide the play from the hash mark. Jones steps up and makes an excellent catch (above).

Without being in the quarterback room, on any other day this could be a reckless throw. Last Sunday, it was a game-defining moment.

Now with just 18 seconds left in the game, Lawrence and his receivers are once again make a play when needed. With the corner rotated up in man-to-man coverage and a safety helping over the top, Lawrence makes up his mind not to read this play out by throwing to a wide-open flat. Instead, he hits his back foot, and his body explodes to pinpoint the pass to a well-covered Jones (below).

Lawrence’s explosive arm talent and accuracy allow Jones Jr. to use his body, catch radius and sideline awareness to make one of the most important catches of the Jaguars’ season. This is exceptional football.

Across these 10 plays, the Jaguars were nearly flawless in their execution of a two-minute drill. With pass rushers able to pin their ears back on every play, Lawrence went virtually untouched, which in most cases is unheard of.

In most two-minute drills, QBs must use their legs to escape the pocket and make a play. During the drive, Lawrence sat back and made the throws, while his receivers came up big by making contested catches when the team needed them most.

That’s why this drive is so special. Everyone did their job. From the coach’s preparation to the player’s execution, this drive can allow the Jaguars to turn the corner. And they did it against a good defense and team in the Ravens.

Pederson’s decision to go for the win with a two-point play confirmed the Jaguars would have the final opportunity to win the game.

The line protected, Lawrence’s quick drop was impeccable and Jones was patient to stick and freeze his defender to allow for separation (above). If you watch closely, the ball was already out of Lawrence’s hands before Jones had even brought his eyes to the ball.

Lawrence executes a perfectly located pass for the win (below). There were a lot of reasons why the drive succeeded, and it wasn’t just the play of Lawrence.

Lawrence made some great throws, missed some easy throws and made some questionable decisions that, ultimately, became the right ones on Sunday.

WATCH: Nothing Too Big For Trevor Lawrence