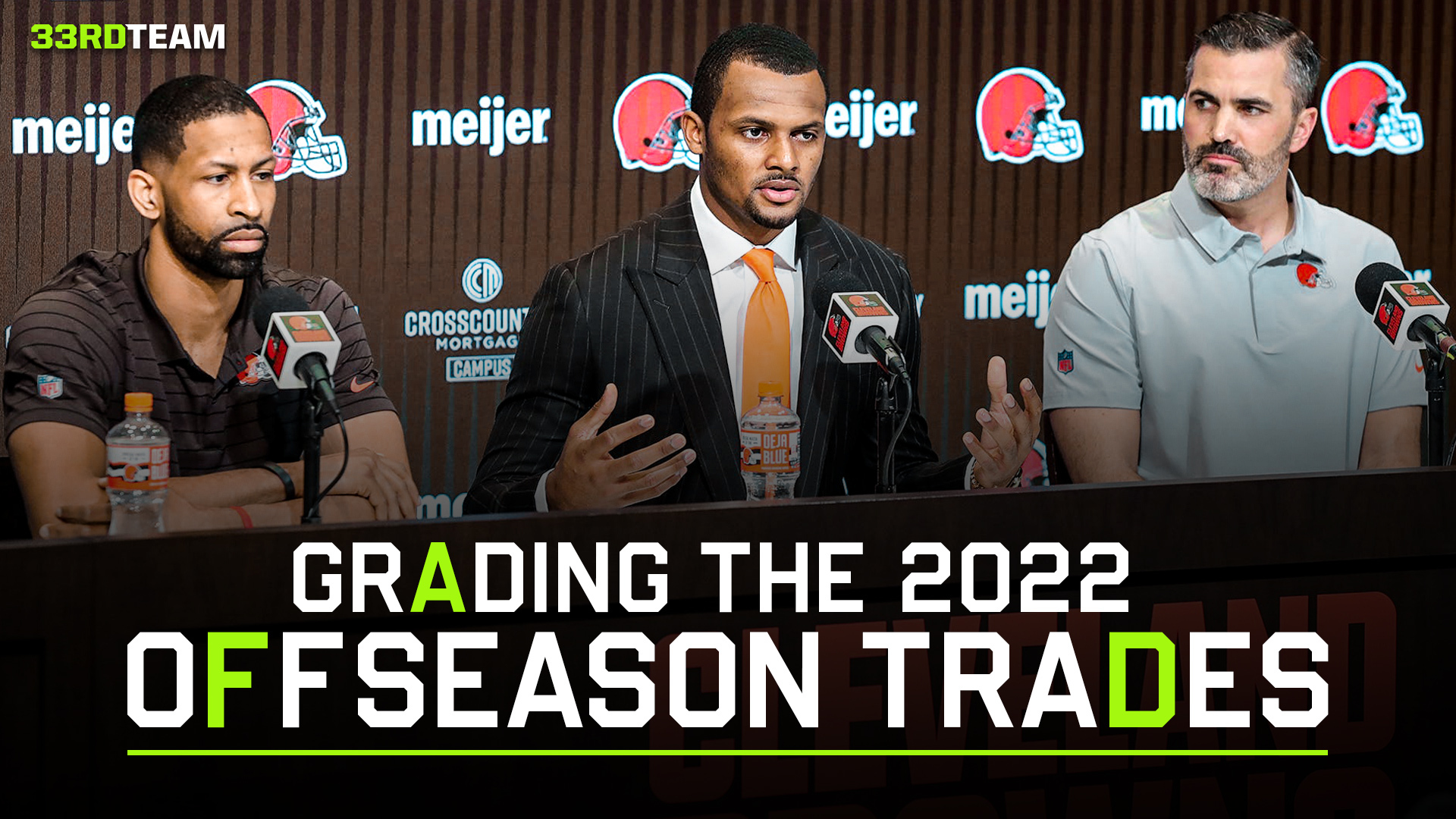 Hindsight is 20-20, which applies to second-guessing major moves of NFL teams. The 2022 offseason saw many huge trades, with team execs taking major risks as they sought immediate reward.

The hope going into trades is that they work out well for both teams. As we’ve seen, that was not the case so far in the majority of the eight trades reviewed below (and my grades are based primarily on what we saw on the field in 2022, although I do factor in future draft picks forthcoming): The Browns felt they had to go over the top on draft picks and a new fully guaranteed $230 million over five years to get Watson to waive his no-trade clause. Cleveland wanted to move on from Baker Mayfield for Watson, an elite QB in Houston who did not play in 2021 due to his well-documented off-field issues.

The Texans have performed poorly without a top QB, but their future looks better since they’ll be able to draft a new franchise quarterback with the first or second overall pick (on their own pick) and reinforce both sides of the ball with the first and third round picks from Cleveland in the upcoming draft, They also have a first and fourth pick coming from the Browns in 2024.

With Cleveland’s first and fourth-round picks in last April’s draft, Houston selected a solid starting guard in Kenyon Green and excellent running back Dameon Pierce (the team’s leading rusher with 939 yards in 13 games before landing on injured reserve with an ankle injury).

Watson, meanwhile, was suspended for 11 games and has played far below his past standards in five games (78.1 rating, his career low by 20 points, 29th ranked this season). He is 3-2 as the starter but has not lifted the Browns into playoff contention and had a terrible game in the Week 16 loss to the Saints (135 passing yards with one pick) that eliminated Cleveland.

The Browns would still do the deal with four years left on Watson’s contract for him to justify the price tag in picks and money. It will be hard for him to overcome his bad image, which is not good for the team.

Texans would do it again to move on from the problematic Watson with such a haul. This trade is a disaster for the Broncos and a godsend for the Seahawks. Wilson has played shockingly badly this season for his 4-12 team that was hoping to contend in the AFC West after the trade.

Wilson’s 82.5 rating is down more than 20 points from last season in Seattle, and the Broncos made things worse with a big extension for Wilson (five years, $243 million, with $161 million guaranteed). They’re stuck with him for several more years due to the dead money issue, and they hope 2022 was an aberration for a QB who looked like a sure future Hall of Famer. Wilson’s coach Nathaniel Hackett was fired, so we’ll see if the next head man in Denver can get the 34-year-old Wilson back on track.

The Seahawks surprisingly got a strong season out of Geno Smith (especially the first half) and are primed to perhaps draft a future starter (Denver’s No. 1 should be a top-five pick), plus they have another second-rounder in 2023. With the 2022 picks, Seattle drafted a solid and improving left tackle in Charles Cross in the first round and an edge rusher with a promising future in Boye Mafe in the second round (he has 38 tackles and two sacks).

Noah Fant has played well with 46 catches for 466 yards and four TDs, and he’s only 25 years old. Shelby Harris is a starter but probably not for the long term at 31 years old (38 tackles, two sacks), and Drew Lock is the backup QB.

The Broncos would not do it again.

The Seahawks definitely would do it over. The often-injured Wentz got hurt again after starting the season 2-4. Coach Ron Rivera made a mistake in starting him over Taylor Heinicke last week, when Wentz had an awful game with three interceptions as the Browns eliminated the Commanders from the playoff race.

Washington overpaid for Wentz, who had played poorly in Indianapolis after the Eagles gave up on their former second-overall pick.

The Colts used the Commanders’ second-rounder to trade back and pick two starters in wide receiver Alec Pierce (38 caches for 551 yards, two TDs) and left tackle Bernhard Raimann. They chose tight end Jelani Woods with the third-rounder, and he’s been productive with 24 receptions for 303 yards and three TDs. The Colts still have the Commanders’ third-round pick in 2023. We’ll see how all these players perform in the future, but their prospects are certainly brighter than Wentz’s in Washington.

The Commanders would not do it over.

The Colts would re-do this in a heartbeat (although their trade of a third-round pick for an over-the-hill Matt Ryan was a bust). 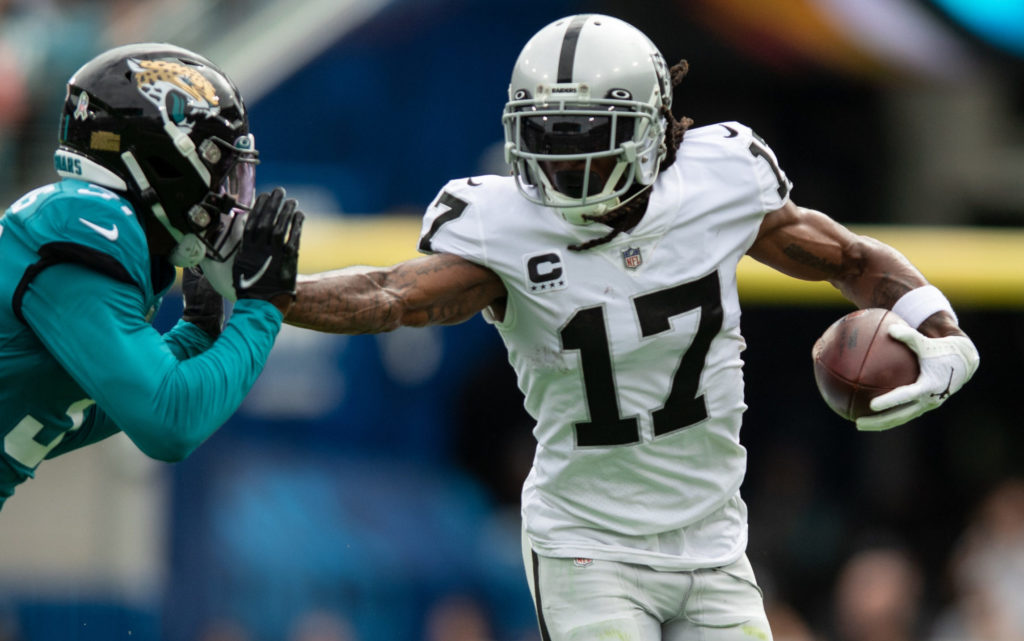 Adams has played excellent as usual, with 95 catches for 1,443 yards and 14 TDs, comparable to his past production with the Packers. He’s still elite but is 30 years old, and he hasn’t elevated the Raiders to Super Bowl contenders as they hoped (it’s not at all his fault, but the Raiders have regressed from a playoff team to 6-10).

The Packers really missed Adams’ production and connection with Aaron Rodgers over the first half of the season, but the second-rounder in this deal — Christian Watson — has come on strong in the second half of the season once he earned Rodgers’ trust. Watson has 36 catches for 507 yards and nine total TDs (seven receiving, two rushing). He could well be a future No. 1 receiver.

The Packers also used some of the salary savings from moving Adams to extend three key defensive players—corners Jaire Alexander and Rasul Douglas and linebacker De’Vondre Campbell. But if the Packers had kept Adams, they likely would have a couple more wins and already have clinched a wild-card spot instead of having to win this week to get in.

I’d say the Packers still would do the deal to avoid Adams’ huge salary and to get the younger Watson and a good young linebacker in Walker, even though it cost them some games this season.

Adams is great but aging, and the team regressed. Hill is having a tremendous, career-best year (117 catches, 1,687 yards, 7 TDs) and helped the Dolphins on the path to the playoffs until QB Tua Tagovailoa’s concussion issues derailed Miami’s strong season (although they’re still alive going into Week 18). At 28 years old, Hill has plenty of dynamic years ahead.

The Chiefs traded up with the three 2022 picks to select a starting cornerback—Trent McDuffie (37 tackles, no interceptions, six passes defensed). He should be a quality corner for many years. And the Chiefs have the two third-day picks in the upcoming draft. They used a good portion of Hill’s money to sign two veteran receivers – JuJu Smith-Schuster (76 catches, 898 yards, three TDs) and Marquez Valdes-Scantling (39 receptions, 660 yards, two TDs) and drafted Skyy Moore at the position. And with Patrick Mahomes leading the charge, the Chiefs are sitting fine at 13-3.

Yes, they’d do the deal again.

They would also do it over, so this trade worked out for both teams. Coach Mike Vrabel was unhappy this deal was made because he lost the team’s No. 1 receiver. The Titans didn’t want to step up to an exploding wide receiver market and pay Brown, but the Eagles were happy to make the deal and pay the going rate of $25 million per year.

Brown is only 25 years old and has been terrific in a Pro Bowl season (84 receptions, 1,401 yards, 11 TDs). He is a big factor in the Eagles’ improvement to a 13-3 team currently. Brown clearly would have elevated the Titans offense this season.

The Titans drafted Treylon Burks (29 catches, 425 yards, one TD), who has not played as well as the team hoped, but with Ryan Tannehill out, the passing game has suffered. So far, this deal that is essentially a vet receiver for a rookie receiver plus a pick has not worked as well as Stefon Diggs for Justin Jefferson, plus picks, played out for the Bills and especially for the Vikings.

The third-round pick for Tennessee was packaged in deals that resulted in a starting corner Roger McCreary (83 tackles, one pick), starting tackle Nicholas Petit-Frere and backup receiver Kyle Phillips (on IR).

This trade was likely part of the reason GM Jon Robinson was fired, and the Titans don’t make this trade in a do-over.

Great deal that the Eagles happily do again for a premier receiver. 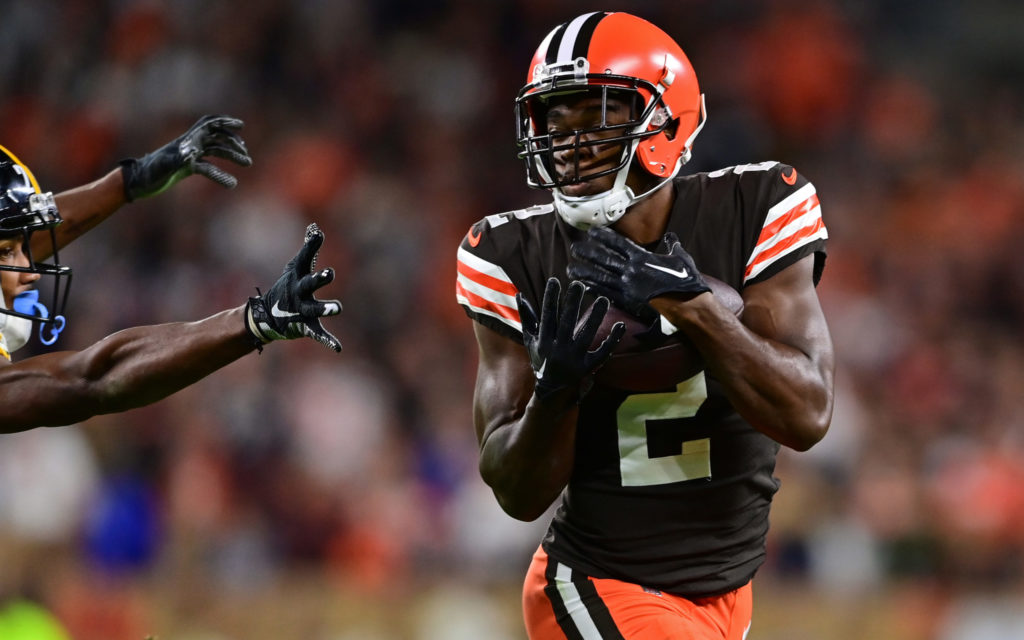 Jerry Jones said he made the Cooper trade to free up cap room for other players such as defensive end Dante Fowler, safety Jayron Kearse and an extension for receiver Michael Gallup. He also was thinking down the road on an extension in the next couple of years for star receiver CeeDee Lamb. With Gallup coming off an ACL, the Cowboys could’ve used Cooper’s consistent production, especially early this season.

Cooper has played well for a Browns team that features the running game with Nick Chubb. Cooper has 76 receptions for 1,109 yards and nine TDs, and at 28 years old, he should have several more solid seasons and gives Watson a top target.

With the fifth-round pick acquired in the trade, the Cowboys picked tackle Matt Waletzko, who played only one snap this season before going on IR with a shoulder injury.

The Cowboys should have received better compensation from the Browns for a player they traded a first round pick in 2018 to acquire from the Raiders, but they still would do this deal again to free up Cooper’s salary.

Low-risk deal other than the money paid to Cooper, which he’s earned, so yes, the Browns would make this trade again. The Bears already were contemplating their rebuild mode with the March trade of Mack, and they followed it up by trading two other top defensive players in Roquan Smith and Robert Quinn. Mack is a seven-time Pro Bowler who was a big part of two Bears playoff teams, but injuries cost him 10 games during the 2021 season, so the Bears were ready to move on from his big salary.

He’s stayed healthy and played well for the Chargers with 48 tackles and eight sacks, which probably would’ve been more if fellow edge rusher Joey Bosa had not missed 12 games (groin). Mack is 31, which also was a factor for the Bears to make this move, so his years of double-digit sacks are likely over (2018 was the most recent time). But he clearly has helped the Chargers become a playoff team this season.

The Bears drafted a promising starting safety with the second-round pick in Jaquan Brisker (68 tackles, one interception with 39 tackles in the last five games, so he’s improving quickly). The Bears also have the late-rounder in 2023.

The Bears would do this deal again.

The Chargers also would re-do, and this is another even trade for both teams.

Next week I’ll review and grade several trade deadline deals made this season, with at least three such trades helping teams make the upcoming playoffs.