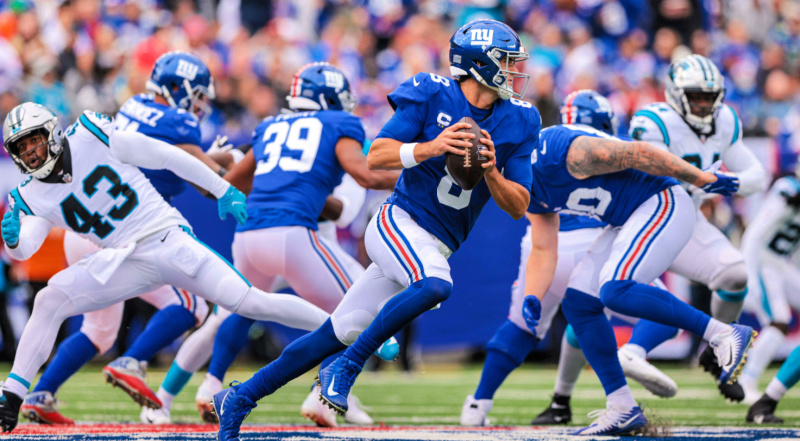 When the New York Giants selected Daniel Jones sixth overall in the 2019 NFL Draft, it sent shockwaves across the NFL. Jones was viewed by many draft pundits as hardly a first round talent, and here he was being selected above “sure thing” talents such as Jacksonville’s Josh Allen and Buffalo’s Ed Oliver. Of the four players taken from fifth overall to eighth overall, Jones is the only player yet to make an appearance in the Pro Bowl.

Now, in March 2022, with three NFL seasons under his belt, Jones remains as polarizing as ever. The spectrum of opinions on Jones is wide-ranging and ever-changing, with some believing the Giants should already give up on the former Duke quarterback, and others contending that Jones just needs improvement to the situation around him – then he’ll thrive.

The argument for the latter certainly has validity. After all, the Giants are already on their third head coach and fourth offensive coordinator since they drafted Jones. Pat Shurmur was fired after the 2019 season, having led the Giants to a 9-23 record in two seasons as the head man. Ironically enough, Shurmur is the coach that Jones has experienced the most success under. In 2019, “DJ” threw for 3,027 yards and 24 touchdowns in 13 games, both of which are career high figures thus far.

After Shurmur, the Giants hired Joe Judge to lead the team and brought in Offensive Coordinator Jason Garrett to help develop Jones. Judge compiled a 10-23 record in two seasons before being dismissed in January. Garrett didn’t make it quite as long, as he was fired following the team’s Week 11 loss to Tampa Bay. The truth is, the organization-wide failure to get the most out of Jones stretches far beyond just coaching. Ever since he stepped into the league in 2019, he’s played behind a struggling offensive line. New York’s talented skill players have struggled to stay healthy, and the defense, while showing improvement, has still been mediocre. It’s easy to find flaws with the situation around Jones since 2019, something new GM Joe Schoen and Head Coach Brian Daboll are tasked with fixing. That is, if they decide Jones is their guy, which we’ll discuss later.

After selecting Jones highly in the 2019 draft, then-Giants General Manager Dave Gettleman admitted he was in “full bloom love” with the QB throughout the pre-draft process, and cited Jones’ ability to make plays from the pocket and his mental makeup as reasons for his selection. Gettleman was certainly right about those two things in his evaluation.

When you put the tape on, it’s easy to see why so many remain steadfast on the 24-year old. Jones has the prototypical QB frame at 6-foot-5, 230 pounds, and possesses top-tier mechanics. At Duke, he was coached by the man who helped groom Peyton and Eli Manning in college — David Cutcliffe. Cutcliffe is highly respected in league circles due to his work with quarterbacks, something that also attracted the Giants to Jones in 2019. Jones has textbook lower body mechanics and footwork, a trait that often leads to very good accuracy to all three levels. He’s got good arm strength – he can drive it into tight windows and deliver it on time across-field. He’s proven to be a very effective deep ball thrower as well. Per NextGenStats, he was the best deep ball thrower (passes 20 yards or more) in the NFL in 2020.

When Jones first entered the league in 2019, he possessed what some called “underrated mobility and athleticism.” Three years later, the book’s out – the kid can flat out run, and there’s nothing underrated about it. If defenses don’t have a plan for Jones’ ability to run, they’ll get burned. After all, in 2021, DJ ranked 7th among QBs that played 11 games or more with 27 rush yards per game. Jones is still a pocket passer at heart, but his athleticism and ability to extend drives with his legs is a real asset and something Daboll will surely utilize.

Rounding out the pro-Jones argument, his even-keeled nature and toughness are two traits that endear him to so many within the Giants building. Jones is universally loved by his teammates, and is as tough as anyone, playing through injuries left and right both at Duke and with the Giants. He’s the type of player that would try to play through any injury no matter the pain. He has a consistent, confident demeanor and possesses the self-belief yet laid back personality to lead the franchise and handle being one of the faces of New York sports. Sound like a former Giant quarterback to you? The similarities between him and Eli Manning are hard to ignore at times. However, there are some major differences between Manning’s career and what we’ve seen from Jones so far (albeit only three seasons), which leads us to much of the anti-Jones argument.

The uncertainty and doubt surrounding Jones’ credentials can be summed up in three words: losing, turnovers, and injuries. He has amassed a 12-25 record as an NFL starter,  and has yet to win more than five games in any of his three seasons as the Giants’ signal-caller. When you combine this with a 17-19 record as a starter at Duke, it’s a large sample size of failing to win games at the two highest levels of the sport. Of course, you cannot just take those numbers at face value and blame Jones for the losing — we all understand that. But one quality that is consistent with all the top-tier quarterbacks in the sport is their ability to raise the level of their teammates and lead their team to victory. Jones has not done that. In fact, he’s unfortunately been a key part of the losing effort for the Giants far too often, which leads us to the turnovers…

There is no denying that Jones has an outright turnover problem. It’s a question mark that still exists to this day, even as he’s on the precipice of his fourth season as a starter. In 37 NFL games, Jones has accrued 49 total turnovers – 29 interceptions and 20 fumbles lost. He’s fumbled 16 MORE times, but the Giants recovered those 16. To pour salt on the wound, many of these turnovers have come at the worst times, with Jones making a key mistake with the game hanging in the balance.

From a scouting standpoint, he still has issues seeing the field at times, forcing the ball into inopportune situations and struggling to hold onto the ball in the pocket when hit. The decision-making makes you scratch your head at times, as he tries to do too much too often. While there are many factors that contribute to the losing (and to some of his turnovers, for that matter), make no mistake about it: Jones rightfully deserves to be held accountable for the 12-25 record and his 49 turnovers. It’s an ugly part of his résumé as a pro, and if he wants to be viewed as a foundational player and mainstay starter, he must show he can escape both labels.

Lastly, the evaluation of Jones remains somewhat muddy because of the injuries he’s dealt with. He’s yet to play a full season as a starter. In 2019, he started 12 games (he was the backup to Manning in Weeks 1-2 and missed Weeks 14-15 due to an ankle injury). In 2020, a Hamstring ailment caused him to miss two games late in the year. He first sustained the injury in Week 12 at Cincinnati, and from that point on, even in the games he did play, he clearly wasn’t himself.

Then, in 2021, he missed the final six games due to a Neck injury. In the games he missed last season, the team went 0-6 and averaged 9.3 games per game. They were non-competitive in all six games, and it led to the firing of Judge and a total reboot for the franchise. It would be nice to see Jones play a full 17-game schedule, where we’d be able to assess a complete sample size over a full season of work.

For every naysayer Jones has, there’s an optimist who has plenty of things to blame his up-and-down play on: coaching, the offensive line, injuries, and so on. Herein lies why Jones remains a controversial player, and one that still has lots to prove before he is given a second contract.

What’s Next for Daniel Jones and the New York Giants?

Schoen will ultimately have a big decision to make on Jones, and there’s lots of layers to that decision. For starters, Jones is under contract for one more year before he enters free agency. There is, however, a way the team could lock in Jones for 2023 — by picking up his fifth-year option.

If they decide to pick up the option before the May 2 deadline, it would cost the team $22 million, all of it guaranteed. The recent signing of veteran QB Tyrod Taylor tells us that Schoen and Daboll want Jones to be pushed, and that the Giants want a much better contingency plan in place in the event of a Jones injury – something they did not have last year. I would expect the team to decline that fifth-year option given the moves they’ve made so far, and the clear effort by Schoen so far to rectify a bad salary cap situation and turn the roster over, leaving flexibility for the future when it comes to addressing the QB situation.

In today’s day and age, given how valuable franchise quarterbacks are, teams typically lock up their guys a year or two before they hit free agency, so it’s telling just how much of a conundrum the Giants are in with Jones that they’re prepared to “let it ride” in 2022. That is probably the right decision given how unclear Jones’ future is in this league.

Entering the 2021 season, many labeled Jones as one of the players in the NFL with the most pressure on him. I’d argue there’s far greater pressure on the even-keeled 24-year old entering 2022. As complicated as his situation has been over his first three years, the path that lies ahead really is quite simple: Either he plays his way into a massive contract extension as a starting NFL quarterback, or he leaves more room for doubt and remains a player that teams don’t want to commit to. Regardless of how it plays out, Jones will continue to have doubters, just as he always has since the day the Giants drafted him and that “full bloom love” turned to reality.