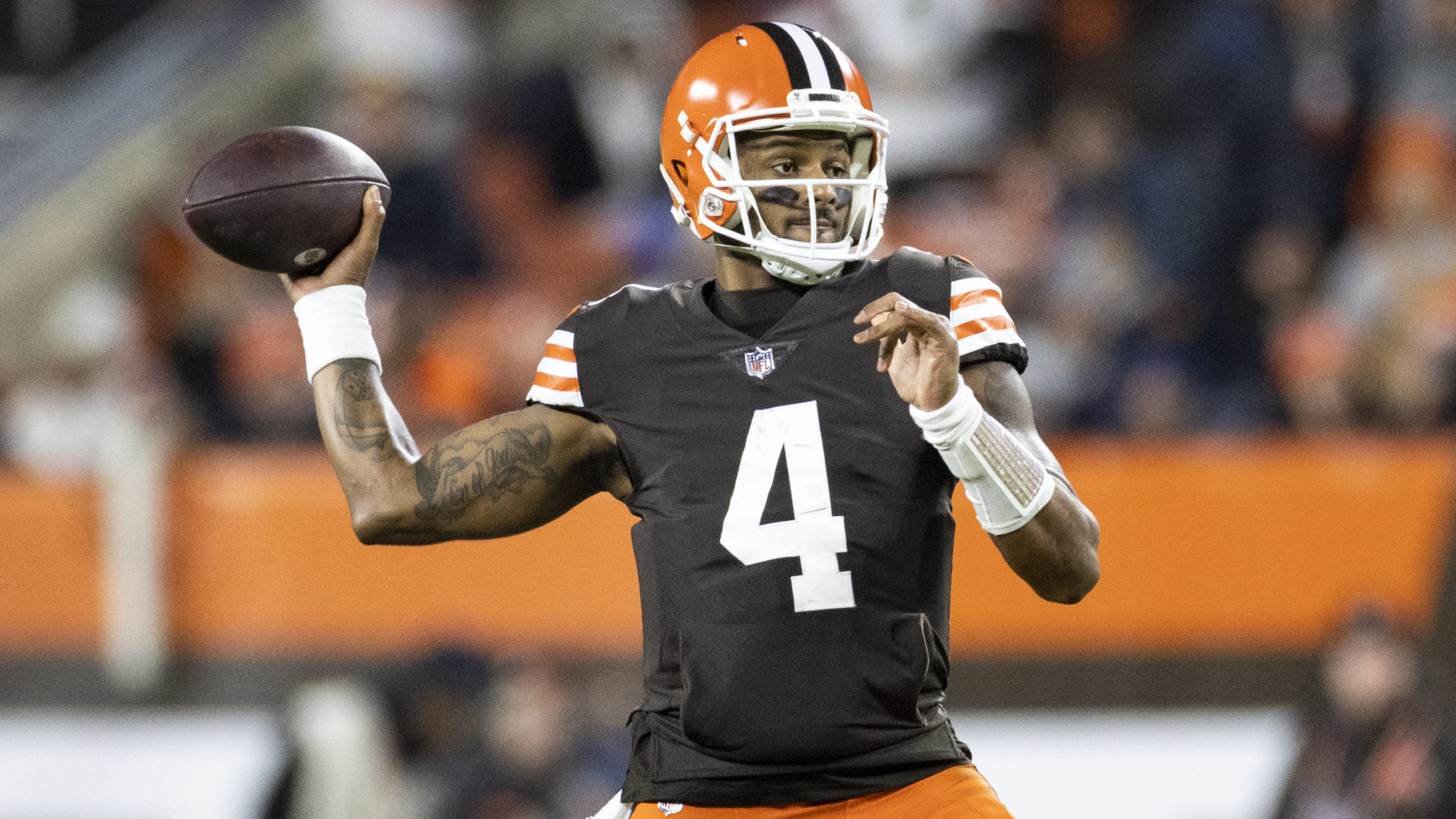 The Browns were eliminated from the AFC playoff race after their 17-10 home loss to the Saints last week, so now we can officially call the first year of the Deshaun Watson trade a failure.

Now the Browns organization and Watson are under huge pressure to make the deal more palatable to Cleveland fans in 2023 — if that’s even possible with his poor image — when Watson will have a full season at the helm.

During his four starts this season, Watson was a shadow of his former Houston self. He is clearly rusty after not playing in 2021 while he sat on Houston’s inactive list as the NFL wrestled with Watson’s off-field issues due to the 22 civil lawsuits he was facing for his alleged sexual assault and sexual harassment. Watson was, ultimately, suspended 11 games and fined $5 million dollars.

Teams and GMs have to live with a certain amount of risk in all transactions from trades to draft choices and free-agent signings. But between the off-field issues for Watson creating a public relations problem, the compensation paid in draft choices to Houston and his huge fully guaranteed contract, this deal was off the charts in terms of risk. I never would’ve done it if I was the GM, and I would not have approved it if I was the owner. I would have kept the high draft picks and tried to draft another franchise quarterback.

If things don’t improve dramatically for Watson and the Browns, heads will roll starting with general manager Andrew Berry and coach Kevin Stefanski, setting the organization back for many years. There’s a lot at stake if this lightning rod of a QB doesn’t play a lot better next season. The Haslams would love to see Watson play at his former level and lead the Browns back to the playoffs. I think Berry and Stefanski will have one more year to get the Browns back on track. Absent that, Berry would likely be the first to go since he’s most directly tied to the Watson trade.

Stefanski could be given one more year if that happens, but he’d be with a new GM who didn’t hire him, which is not usually good for the coach. Watson’s not going anywhere for several years as it would be an unmanageable dead money cap hit to release or trade him.

We’ll see how it turns out over the long haul but based on what’s happened on the field for Watson and the Browns this year, it reminds me of the old saying “Be careful what you wish for.”

Cleveland was 4-7 when Watson finished his suspension for violating the league’s personal conduct policy (from the sexual misconduct allegations against him). He took over for Jacoby Brissett against his old Texans team in Week 13. The Browns hoped he would help them make a run to the playoffs, but that didn’t happen.

It has to be concerning to the Browns hierarchy that they’re eliminated with two weeks to go as Watson has not elevated the team.

Watson is 2-2 as the starter (with his wins against lowly Houston and Baltimore minus Lamar Jackson). His stats have been unimpressive: 176 passing yards per game, two touchdown passes, three interceptions, 57.7% completion rate, 69.3 passer rating (ranked dead last among starters), 100 rushing yards and one rushing touchdown.

Brissett’s passer rating was 88.9, and he had just beaten the Buccaneers before he was benched for Watson by Stefanski. But the $4.65 million QB (Brissett) was not going to hold off Watson, who is being paid $46 million per year. The loss to the Saints was the worst of Watson’s four games (he threw for 135 yards, no touchdowns and one interception while completing only 48% of his passes on a cold, windy day). He and the Browns were shut out in the second half, and his passer rating for the game was a career-low 47.1.

Now, he has two meaningless road games (for the Browns) at Washington and Pittsburgh where he’ll try to make a better impression compared to his first four starts where has led a total of only three touchdown drives.

More was expected from the three-time pro-bowl quarterback despite his almost two-year absence from regular season games. After all, he had participated in the Browns’ offseason program and training camp. Plus, he played in one preseason game as the Browns prepared Brissett to start the season. He also practiced for three weeks before the Houston game.

Watson’s performance this season is not what the Browns bargained for last March when — much to the chagrin of a sizable portion of their fan base —  Berry (with the approval of team owners Jimmy and Dee Haslam) traded six draft choices to Houston for Watson. The haul included three first-round picks, a third-round pick and two fourth-rounders.

Berry also gave Watson a fully guaranteed five-year, $230 million contract that included a $45 million signing bonus. Watson’s deal upset other team owners, general managers and contract negotiators around the league since it was the largest guarantee in NFL history for a player with a lot of baggage.

In his last full season in Houston, Watson threw for 4,823 yards and 33 TDs with seven interceptions despite the Texans finishing 4-12. He did lead them to the playoffs the previous two seasons. Then of course disaster struck for Watson with the inactive 2021 season leading to the big trade.

It’s not like Watson has a bad supporting cast in Cleveland. Nick Chubb is the league’s third-ranked rusher with 1,344 yards and 12 TDs. Amari Cooper is a 1,000-yard receiver and tight end David Njoku is a former first-rounder with plenty of talent. The offensive line is solid enough. Yet, the Browns have averaged 295 total yards per game under Watson, which would rank 29th over a full season. There are issues with the overall receiving corps and the run defense has been lousy (No. 25), so help is needed in the front seven.

Watson has a head coach in Stefanski who was NFL Coach of the Year in 2020 when the Browns were an 11-5 playoff team and beat the Steelers in the wild-card round with QB Baker Mayfield at the helm.

During a disappointing 8-9 season in 2021, the Browns grew disenchanted with Mayfield, the first overall pick in 2018 (which could’ve been Josh Allen or Lamar Jackson, sorry to bring that up, Browns fans). That down season led Berry and the Haslams to break the bank for Watson while alienating Mayfield in the process.

The upcoming 2023 offseason and regular season are of utmost importance for Berry, the Haslams, Stefanski and the entire Browns organization. And of course for Watson too in terms of playing like an elite quarterback again. He’s only 27 years old, so he should have another 10-plus years to play at a high level if he can step up his play with the help of his coaches and teammates.

The gnawing question for Browns fans — and perhaps for some members of the Browns organization — is whether they are looking at another Russell Wilson case where an elite quarterback doesn’t return to his previous level of play with a new team. Although, Wilson should have at least one more season under a new head coach in Denver to elevate his game). I think Watson can succeed in Stefanski’s system, which emphasizes a strong running game with play-action passing and bootlegs for the QB. Kirk Cousins is a good QB but not as talented or mobile as Watson, and Cousins had a great year in 2019 when Stefanski was the Vikings’ offensive coordinator.

He had a career-high 107.4 rating with 26 TD passes, six interceptions and 3,603 passing yards while going 10-5 as the starter and leading the Vikings to an overtime playoff win in New Orleans. This was before Justin Jefferson arrived in 2020, and Cousins had a similar supporting cast to Watson’s with a pro-bowl receiver in Adam Thielen, an excellent back in Dalvin Cook, a solid tight end (Kyle Rudolph) and a decent offensive line.

Perhaps Stefanski’s offense is not a great fit for Watson compared to Houston’s. Back in my Vikings front office years, our GM Mike Lynn made the infamous Herschel Walker trade with the Cowboys (and I had nothing to do with making that deal for multiple high draft picks and players).

It was the old one-player-away theory where Lynn thought Walker would take our playoff-caliber team to the Super Bowl. But Walker was not a good fit for coach Jerry Burns’ offense, and he was gone within a couple of years.

We don’t know how much input Stefanski had with Berry and the Haslams in trading for Watson. But it’s now his responsibility along with his assistant coaches to make it work in 2023. There will be a full offseason, training camp and preseason games along with 17 regular season games to get Watson in better sync with the offense and his supporting cast.

What Can Cleveland Do?

First off, Stefanski must convince Watson to stay in Cleveland throughout the offseason and put in the time and effort to prepare himself for a much better performance in 2023. Or will Watson figure he’s got the guaranteed money and spend too much time in Atlanta or Miami, two of the destinations he wanted to go before waiving his no-trade clause when the Browns gave him the huge contract?

Along with this pressure on Stefanski, there is perhaps even more on Berry who executed the trade. He must improve the Browns’ receiving corps, tweak the offensive line and add more quality defenders via free agency and with the draft picks he still has at his disposal. He certainly doesn’t need to sink another $10 million into often-injured Jadeveon Clowney for the two sacks he produced this season (with five missed games).

We made it back to the playoffs in Minnesota the year after Walker was released due to some good draft picks in the mid to late rounds along with helpful free-agent signings and trades. So, it’s possible to improve without a couple of years of high draft picks. However, it’s definitely more difficult, and we endured two non-playoff seasons with Walker, which cost Burns his coaching job. Lynn left amid public pressure after the Walker trade to run the NFL’s league in Europe.

The Browns also have a salary cap problem with Watson’s contract that carries a $46 million base salary next year and a $55 million cap number in 2023. Since they’re projected to be tight against the cap, they’ll likely be forced to restructure the contract with a low base salary and another large signing bonus to produce a smaller cap number for 2023 but more potential dead money in the future. That is a slippery slope to be sure.

If Watson doesn’t return to Pro Bowl form and lead the Browns back to the playoffs in 2023, there will be changes at the top in Cleveland. The Haslams signed off on the Watson trade and contract, but the owners aren’t going to fire themselves. Jimmy Haslam has a reputation for quick firings of GMs and coaches. He has had seven head coaches and six GMs during his 10 years of Browns ownership.

Jeff Diamond is a former Minnesota Vikings general manager, former Tennessee Titans team president, and was selected NFL Executive of the Year after the Vikings’ 15-1 season in 1998. You can follow him on Twitter at @jeffdiamondnfl.