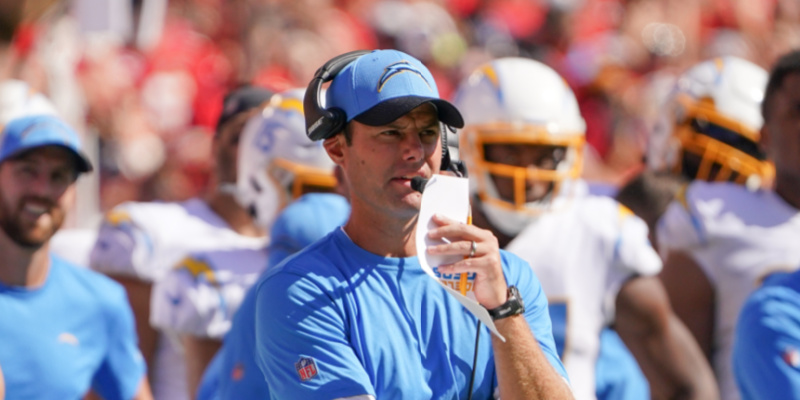 Two of the most intriguing teams this season have been the Los Angeles Chargers and Dallas Cowboys, who each lead their division after the first four weeks of the NFL season. Traditionally thought of more in offensive terms, both teams have defenses that have fascinated me in their scheme and approach as that side of the ball has been a major contributor to each team’s success. First-year head coach Brandon Staley in Los Angeles and new defensive coordinator Dan Quinn in Dallas have both done a remarkable job crafting their defenses to their vision and spearheading them to a terrific start.

One of the most noticeable things in both defenses is the elements they have borrowed from Bill Belichick and the New England Patriots. The ‘Belichickian’ approach to defense is very straightforward: front multiplicity with coverage consistency while playing defense to defend each opponent’s personnel and scheme most effectively. Front multiplicity manifests itself in multiple front looks with players constantly moved around while New England’s coverage consistency means a very high percentage of man coverage. That has been the Belichick template for quite some time.

As the defensive coordinator for the Los Angeles Rams in 2020, Staley led a defense that finished first in both total points and yards allowed. He became known for a Vic Fangio style of defense and featured cover 4 as a strong schematic foundation. While that’s been a piece of what he’s done this season, it hasn’t been his foundation. Instead, the Chargers have adopted a philosophy of defending their opponent however is best to match up with personnel and scheme each week and have been very multiple with their personnel groupings. Quinn was the head coach of the Atlanta Falcons from 2015-2020, and the defensive coordinator of the original Legion of Boom in Seattle in 2013 and 2014. After coaching one of the most dominating cover 3 defenses the NFL has seen, he has evolved as a defensive coach. His defense in Dallas features more multiple front looks with a heavy dose of man coverage, which are two hallmarks of a Bill Belichick defense.

The Los Angeles Chargers beat the Kansas City Chiefs in Week 3 and the Las Vegas Raiders in Week 4, two offenses that feature different personnel groupings in their tactical approaches, with the Chiefs an 11 personnel offense and Gruden’s Raiders more TE-based. Staley, surprisingly to me, featured a lot of man coverage against the Chiefs, playing a high percentage of cover 1 and 2-man coverage. Against the Raiders the following week, he shifted to a significant amount of zone coverage, and played big nickel with three safeties as a foundation personnel package. That was not a package he used versus the Chiefs. The way Staley has matched up to his opponent’s personnel each week has dictated the Chargers’ defensive success, and this was clear in the game at Kansas City. As I’ve discussed previously in this space, the Chiefs feature 1×3 sets out of 11 personnel with tight end Travis Kelce as the single X receiver to the boundary side of the formation. Instead of consistently matching star safety Derwin James on Kelce, which many thought would be the most favorable matchup, the Chargers stayed with both corners playing on the outside. That meant boundary corner Michael Davis matched up man-to-man on the Kansas City tight end, and he covered him effectively within the context of the overall scheme.

Los Angeles has been very multiple in their personnel groupings this season and shown a clear willingness to adapt to their opponent’s offense. Their game plan against the Chiefs featured man coverage on over 80% of snaps, with loaded fronts out of dime personnel on 3rd downs. Against the Raiders, Los Angeles played base defense out of a 5-2 front versus Las Vegas 21 personnel, and as I mentioned earlier, they played big nickel in normal down and distance situations versus 12 personnel. Their nickel defense at times featured 5-1 fronts, while their dime coverages featured 4-1-6 and 3-2-6 personnel. On third downs, Staley’s defense showed loaded fronts and pressured Raiders’ quarterback Derek Carr effectively as they registered four sacks and seven quarterback hits.

The Dallas defense in 2021 has taken a significant step forward under Dan Quinn, as his philosophical approach of front multiplicity and coverage consistency within the defense has meshed well with the Cowboys’ defensive personnel. His growth as a defensive coordinator has been crucial for Dallas. The Cowboys have been extremely varied in their fronts this season and have multiple players that can be moved around. Rookie first-round pick Micah Parsons can lineup anywhere in sub defenses, having started games at linebacker, his natural position, and defensive end. Randy Gregory and DeMarcus Lawrence (pending his return from a broken foot) are two defensive ends with the versatility to move around the front, both in 3 point and 2 point stances; Gregory is coming off a two-sack game against the Carolina Panthers in Week 4. The Cowboys defense has played fast with a lot of energy and has featured a high percentage of man coverage. The emergence of Trevon Diggs as a matchup man-to-man corner has been vital for the Dallas defense. Diggs, in his second season, leads the NFL with 5 interceptions.

In a Week 3 Monday Night Football matchup against the Philadelphia Eagles, Diggs had a 59-yard interception return for a touchdown on the third play of the second half as the Cowboys opened up a three possession lead they wouldn’t relinquish. Diggs made a remarkable play that showed his understanding of receiver splits and quarterback drops. With wide receiver Devonta Smith in a reduced split, Diggs read both Smith and the drop of Jalen Hurts to break on the quick out route before Hurts began his delivery. He would have made the interception even if Smith did not lose his footing on his out cut. He exhibited similar traits in Week 4 against the Carolina Panthers on his second interception of the game. Playing off coverage, Diggs once again “read the triangle” – reading the quarterback and the receiver to anticipate the route and jump it prior to the ball being thrown.

The philosophical and conceptual approaches implemented by Staley and Quinn have been essential to the success of their defensive units. By taking pieces of the Belichick approach, and adapting it to their personnel, they have been able to develop strong defenses that can effectively match up to their opponents. They are two defenses worth watching closely as the season progresses.