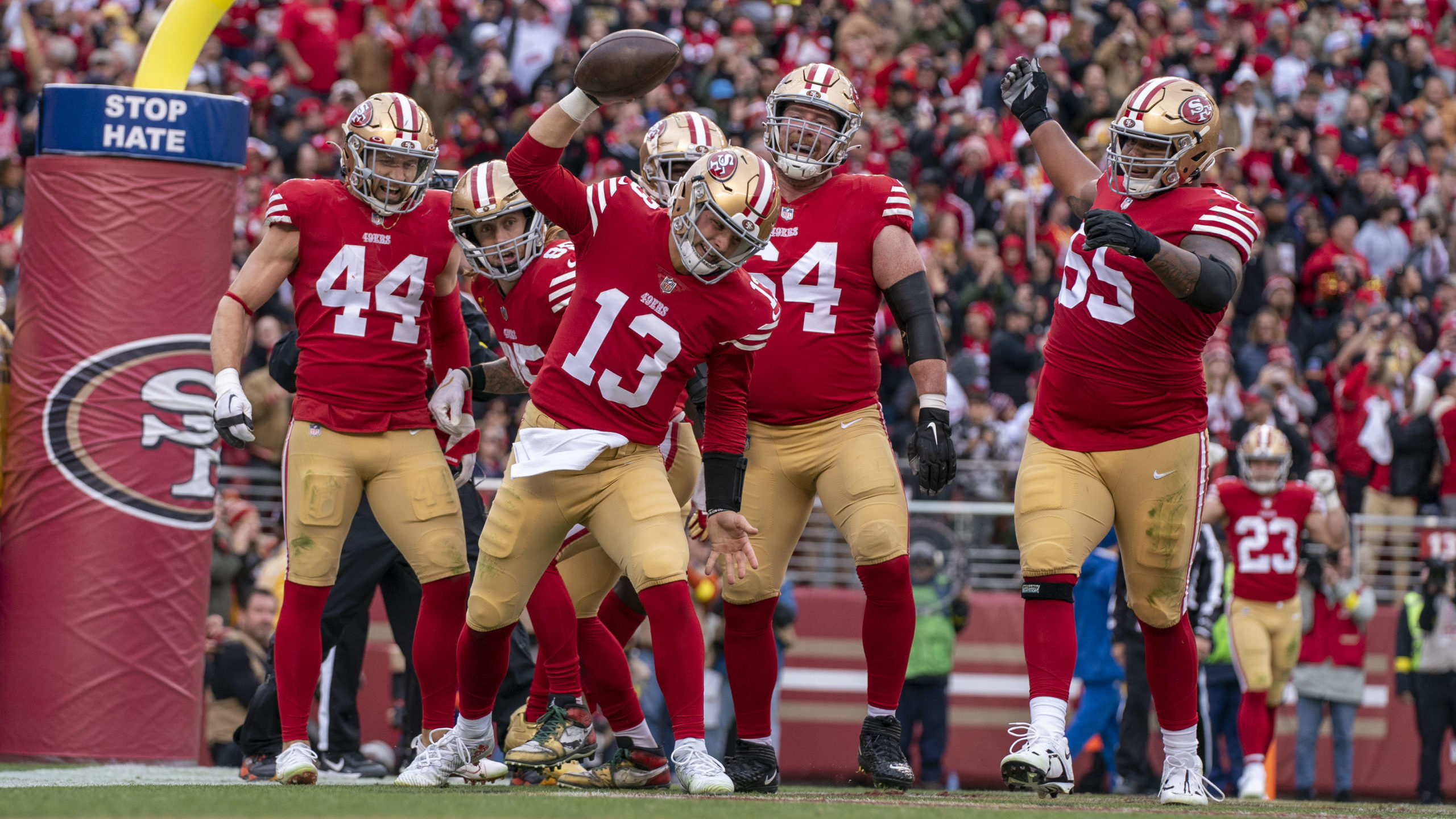 In a way, it’s good Brock Purdy produced the lowest quarterback rating of his seven career starts in Sunday’s workmanlike Divisional Round win against Dallas. There’s not another giant wave of day-after Purdy overhype to sift through in order to form an objective take on a significant topic.

So here it is: It wasn’t the intended outcome when he took over for an injured Jimmy Garoppolo against Miami that first Sunday of December, and it didn’t seem at all a possibility then, but there’s no going back now:

Purdy is the 49ers’ quarterback of the future.

Choose a way to measure a quarterback’s effect on — and fit with — an offense. The team’s wins and losses? They haven’t lost with him yet. Narrow it down to the offense’s points and yards. They’re clicking along at the best pace of Kyle Shanahan’s tenure. How about the quarterback’s efficiency, touchdowns and interceptions? Sixty-six percent and 16:4 is tough to beat. Or do you prefer the intangible optics, just trusting the look and feel of what you see? Purdy — who leads all NFL quarterbacks in wins (7), passing yards per attempt (9.0) and passer rating (116.0), while ranking second in passing touchdowns (14), since taking over for Garoppolo in Week 14 — looks like a high-quality starter on a super team.

Pick a deciding factor of your choice. They are all arrows pointing in the rookie quarterback’s direction, and pointing the 49ers in the direction of committing to Purdy as the starter and dealing with whatever Trey Lance fallout there is later.

Purdy’s performance in Sunday’s win against the Cowboys was more subtle than shining, but it was one more example he’s the right guy for this offense. The game was a slog for the 49ers in every facet; it was blue-collar and bumpy. The defense had to roll up its sleeves, the running backs had to grind a bit harder, the coaches had to have that mentality, and the quarterback had to slug it out, too.

In this way, it would be easier if the 49ers still played at old Candlestick Park, with the dirty mess of the baseball infield still kind of showing through, even in late-season games with the World Series long in the rearview mirror. That’s because it felt like the kind of game where the quarterback had to choke up on the bat with two strikes and just dig in and look for contact.

Foul off that low-and-away curveball, fight the urge to swing at the high heat, lay off the just-off-the-plate slider, foul off another off-speed pitch, and then poke one into right field. Or draw a walk. Or slap one to the right side to advance the runner. Just don’t pop up to the infield or strike out. And when you get the rare fastball down the middle, hit it hard. Purdy, like the entire 49ers team, looked comfortable in that situation for four quarters of a win-or-go-home game.

The 49ers running backs needed 29 carries to hit 105 yards, and Purdy’s 29 pass attempts were the perfect compliment to their hard-earned yards. His 11 yards per completion should not to be overlooked. There were just enough clutch completions to allow the 49ers to convert 7 of 14 third downs, and there wasn’t a single decision or throw that cost his team possession of the ball. Zero turnovers from a rookie quarterback, in a playoff game that was of the one-score variety the entire way, might have been his biggest accomplishment.

I decided before his performance Sunday it was OK to say yes to a pair of Purdy questions when considering the 49ers’ quarterback future. Did he land in a near-perfect situation where he benefits from excellent coaching, a strong run game and the NFL’s best defense? Yes. And is he the right guy to sit at the wheel of this finely-tuned machine and drive it where it deserves to go? Also, yes.

It’s OK to acknowledge both; they don’t have to be exclusive of each other. You can admit he landed on top of the needle, and say he’s excelling in his own right. Let’s back up to San Francisco’s mid-December Thursday night game at Seattle. This was after Purdy’s surprisingly good outings against Miami and Tampa Bay when the whole “What will the 49ers do long-term if this guy is actually this good?” question was in its infancy.

I watched that game just to focus on him, to gather up intel for what I suspected I would write at some point: whether he’s not only a nice story in the short term but the right quarterback in the long term.

Two things stood out. He’s accurate, and he’s not afraid. Keep those in mind as you watch him play. He routinely puts the ball where he wants it to go, and nothing about him appears timid. Not his non-verbals when in the huddle or in the pocket, and not his decision-making when he needs to pull the trigger. He’s bolder and calmer than his rookie stature would suggest.

His compact delivery and quiet lower body were two other things that kept showing up in my notes. Neither sounds too sexy or major, but they both contribute to the steady and consistent way he plays. He’s never out of sorts in his lower body; his footwork and balance are always ready to support his mind and delivery. This plays well with his short stroke and his quick-minded conviction.

It also sets up this bonus quality he’s shown throughout the past eight weeks: the one that allows him to look so comfortable surveying from the pocket. A serviceable quarterback can drop back, recognize his first read is open, and deliver the ball. The ability to do just that makes one a quality backup in the NFL. It’s a nice place to start, but there needs to be more.

Purdy has consistently shown “more” with how he performs in those split seconds after the first option isn’t there. The ease with which he operates in those spots has been the most pleasant surprise in his ascent. He has the knowledge of where to go “next” and the mechanics and patience to execute it. It’s one thing to have an offensive line that provides the extra time to locate secondary receivers, it’s another to have the cool and the balance to win with that extra time.

Kudos to the way Shanahan and quarterbacks assistant Brian Griese have coached him, and to Purdy himself for being a quick study. His command of the offense shines when going from the first option to the second to the third. His afore-mentioned mechanics, the footwork and delivery that minimize motion and maximize balance, deserve recognition as well.

The way he leverages extra pocket time reminds me of how Kurt Warner used to, with little bounces and hops to maintain his rhythm and balance. These allow his body to remain ready as his mind and eyes reset to secondary receivers. There’s no big windup — in his lower body or with his actual motion — that costs him precious split seconds in the pocket and can lead to inaccuracy downfield.

Keep that in mind when watching him in the NFC Championship Game on Sunday in Philadelphia, especially in the moments where his first read is covered and his protection allows him to scan the field. He’s impressively wired — mechanically and mentally — to handle those instances at a high level. His body and mind are completely comfortable with an extra beat or two in a crowded pocket.

There are physical limitations with Purdy’s size and arm strength (he’s almost never asked to throw any type of deep ball, and he isn’t much of a runner) that made him the last pick of the draft. Lance has the physical upside that made him a high first-round commodity. That’s all part of the long-term equation, and part of the argument — whatever is left of it — that maybe the offense would be more dynamic with Lance at the controls. He might provide a higher ceiling, but you need to be careful with betting on potential when so much production is right in front of you.

Where Do 49ers Go From Here?

The one case I can remember that has some merit here and is fun to consider lies with another team still alive in the playoffs — Kansas City. In 2018, Andy Reid made the call to switch from Alex Smith to Patrick Mahomes. Before you scoff, keep in mind the 2017 Chiefs with Smith as the starting quarterback were a 10-6 playoff team, fifth in the NFL in scoring, and Smith was completing 67 percent of his passes for 26 TDs and only five picks.

They were without a doubt a good team with a high-performing quarterback. It took strong belief from Reid, and what he saw from Mahomes during practice that season, to pull the plug because he knew greatness was in the bullpen. Does Shanahan, based on limited game time and a fair amount of practice time, see that kind of potential in Lance? It doesn’t feel like it from here.

Add to that Purdy is just scratching the surface on his potential as a rookie, while Smith was in his second decade as an NFL starter. This 49ers team is a level better than those Chiefs teams, and I don’t think Shanahan and general manager John Lynch are veering toward the road Reid and the Chiefs took in 2018. I’d actually double down on the current Purdy formula and say it can get even better.

Like the other 31 teams, the 49ers will have difficult roster decisions to make whenever their season comes to an end. But what to do at quarterback shouldn’t be one of them. When you’ve built a championship-level team and coaching staff, leaving well enough alone at quarterback is a good idea. Especially when that quarterback continues to indicate he is better than just well enough.