As a former Scout School student and Player Personnel intern at UCF, who has won six figures playing DFS, understanding and exploiting coverage mismatches is my biggest edge.

This article will help you understand the basics behind each coverage scheme and what it takes to beat it. With the help of former coach Mike Martz, current New York Giants wide receiver Isaiah Hodgins, and former Pro Bowl WR Greg Jennings, I created the article I wished existed when I started my football journey six years prior.

The NFL is a league that features a lot more zone-coverage schemes than man schemes. Since 2020, 66.4% of dropbacks have been against a zone-coverage scheme. Man coverage is exactly as it sounds; the person in front of you is the player you will guard for the duration of the play, and depending on the number of pass rushers, you can have or not have any help. In zone coverage, you are defending an area of the field, and you will eventually be matched up with someone in a man style of coverage.

The number next to the specific coverage represents the deep safety and how many there are (i.e., Cover 2 = two deep safeties). The great defensive coordinators can hide their coverage presnap making QBs believe one thing and see another post-snap. Below is a chart of data collected by Sports Info Solutions on each coverage scheme.

The easiest coverage to explain is Cover 0 because it’s a heavy blitz with no help over the top and every player is covering the man in front of them. In this coverage, you are selling out on the run or making it a situation where the ball gets out quickly. This coverage is mostly used in short-yardage situations and does not get run on first or second down.

In order to beat this coverage, a quarterback needs to extend the play or get the ball out quickly. A wide receiver will need to win his matchup quickly or make a contested catch. For a big play, the wide receiver will likely need to break a tackle on his journey to the end zone. The defensive backs expect a quick throw, so the deep route will be an open play. In the example below, Josh Allen creates enough time for Stefon Diggs to run past Xavien Howard on a go route because Howard expects a quick route. Cover 0 represents just 2.48% of all coverage played since 2020, and it’s rare to see any team utilize this coverage on plays that aren’t short-yardage. The second-most popular coverage in the NFL is Cover 1. In recent years, it has been one of the coverages teams shy away from because of the great quarterback play paired with wide receivers that can win deep. Cover 1 has one safety back as they help down the field with man coverage across the formation. The teams that cannot stop the run find themselves in this coverage because of the extra man you have in the box against this coverage. Many teams will bring a fifth pass rusher out of this coverage and try to get you to quickly get rid of the ball.

This coverage is beaten in a few different ways; having your route concepts designed to free a player up or having a mismatch on the field waiting to be exploited. A player with the skill set of getting separation and being a dominant route runner can create issues in this coverage. For example, Jerry Jeudy is a player that dominated against Cover 1 and averaged 3.80 yards per route run. There were five games where the Broncos had over 30 percent Cover 1 coverage, and in the four games he played at least 60 percent of the snaps, he averaged 96.5 yards receiving per game.

The example below is the Lions running Cover 1 against the Vikings. The safety of the Lions is not cheating showing leverage either way, but once the ball is snapped, he picks a side he is defending. Off of play-action, Kirk Cousins reads that the safety has flipped his hips in a bad way. Cousins knows Jefferson is running a deep crosser, and there is no way the safety can get back to that side of the field in time to defend the route. Cousins knows he needs to maneuver in the pocket to buy enough time for Jefferson’s route to develop and make the throw. Adam Thielen is running a comeback route and holds the outside corner from coming off him and making a play on Jefferson. Cover 1 accounts for 25.55 percent of all coverage since 2020 and is a man scheme that teams like to utilize for the extra man in the box. 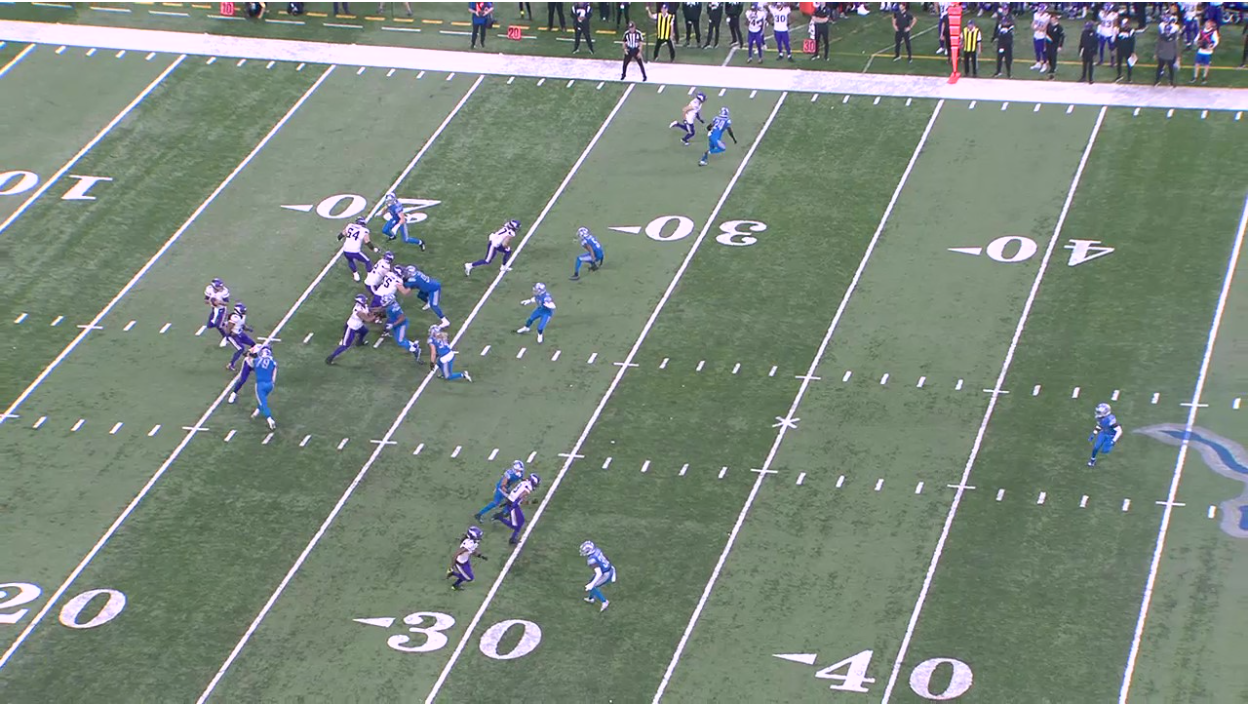 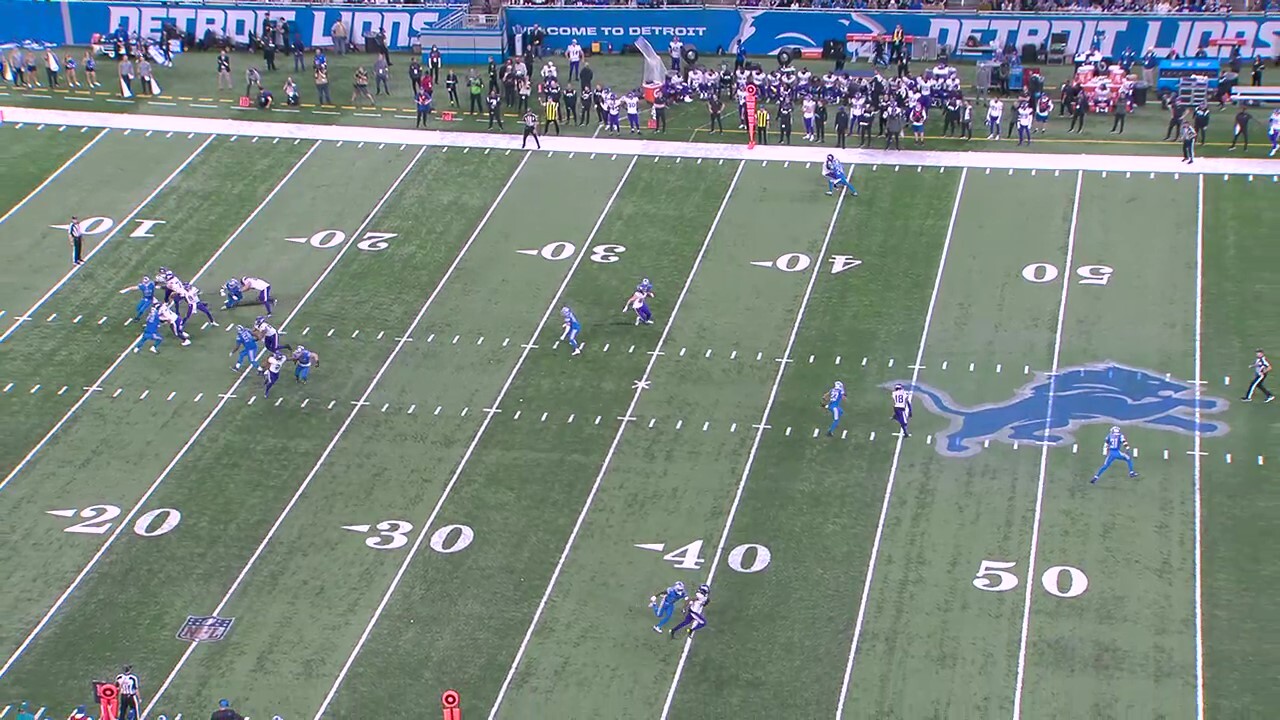 This coverage has two safeties in help and has every other player covering the man in front of them. The Saints are the team that will utilize this coverage the most, and you normally will want to run against this coverage. This coverage league-wide has been deployed at just a 5.58 percent rate since 2020.

Winning against this coverage usually requires wide receivers that can win off the release on short routes. Anything deep will be a double coverage situation, and attacking that area of the field is not recommended. If the linebackers struggle in coverage, getting a pass-catching running back or tight end on that player will create a mismatch. The pass rush will also rely on four players; if they get there with four, it creates a big problem for the offense. In the play below, players line up directly with the man in front of them, showing man coverage. The safeties are split deep down the field and not over a particular player showing that it’s a two-safety look. Cover 2 is a zone scheme with two players defending the deep routes, five defending the underneath area, and four rushing players. This prevents a lot of the quick throws from becoming big plays. The most common variation of this scheme is called the “Tampa 2”. Normal rules of Cover 2 cut the short area of the field into fifths, which are divided equally amongst five players to defend.

In the early 2000s, the Tampa 2 scheme took that middle linebacker and had him defend the deep middle of the field because teams attacked it as a weak spot in the zone. For a while, it worked and confused offensive coordinators for some time. This scheme is becoming more popular and has been utilized at a 13.86% rate since 2020. The teams that lived in Cover 2 were coached by Lovie Smith because he was a part of the founding of this coverage scheme.

There is a way to break this coverage. Breaking this coverage requires a quarterback to use his eyes and manipulate the zone. One way to break it is using a concept called high to low on the outside corner and see which route he will take away.

The play below is the Cowboys utilizing the Tampa 2 scheme against Tom Brady during their wild-card game, and you can see the middle linebacker bailing out of the short area to play the deep middle of the field. Brady has seen this plenty, and they are in a four-vertical play call. Brady gets the safety to turn his hips and break toward Cameron Brate and throws the ball down the field to Julio Jones, who has gotten behind his corner. The protection was there for the play to develop, and Brady was able to manipulate the safeties. 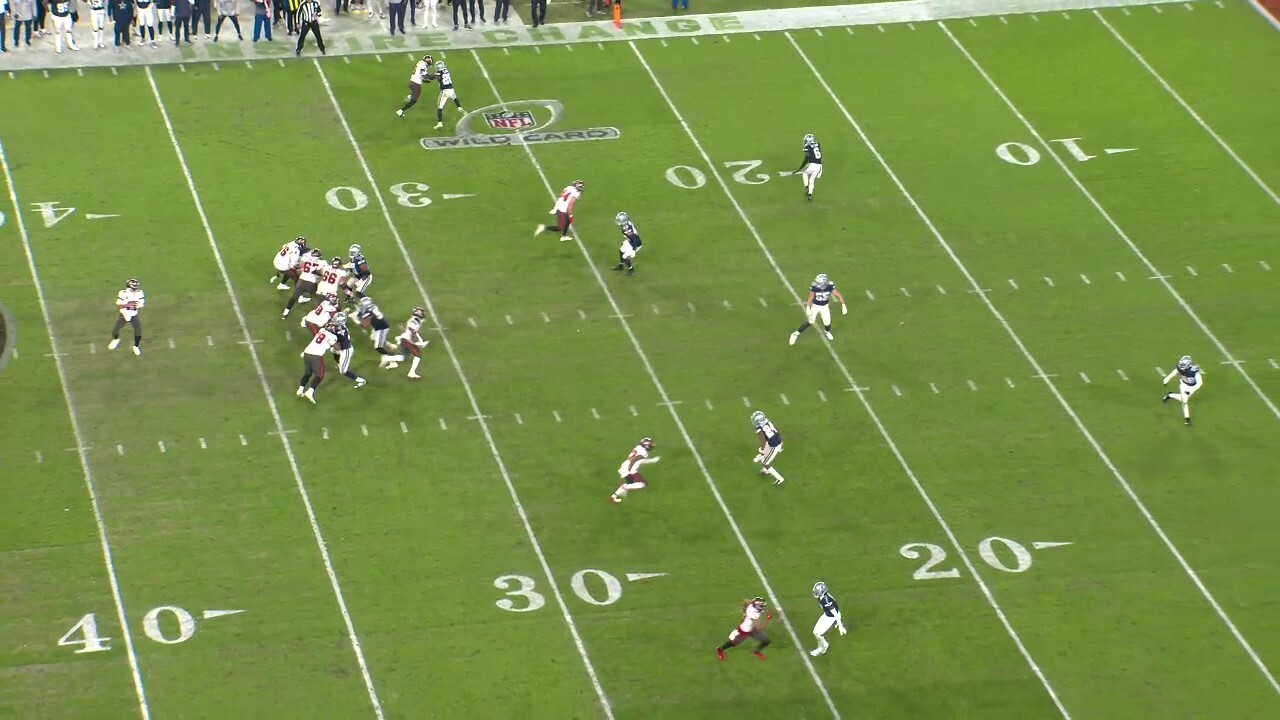 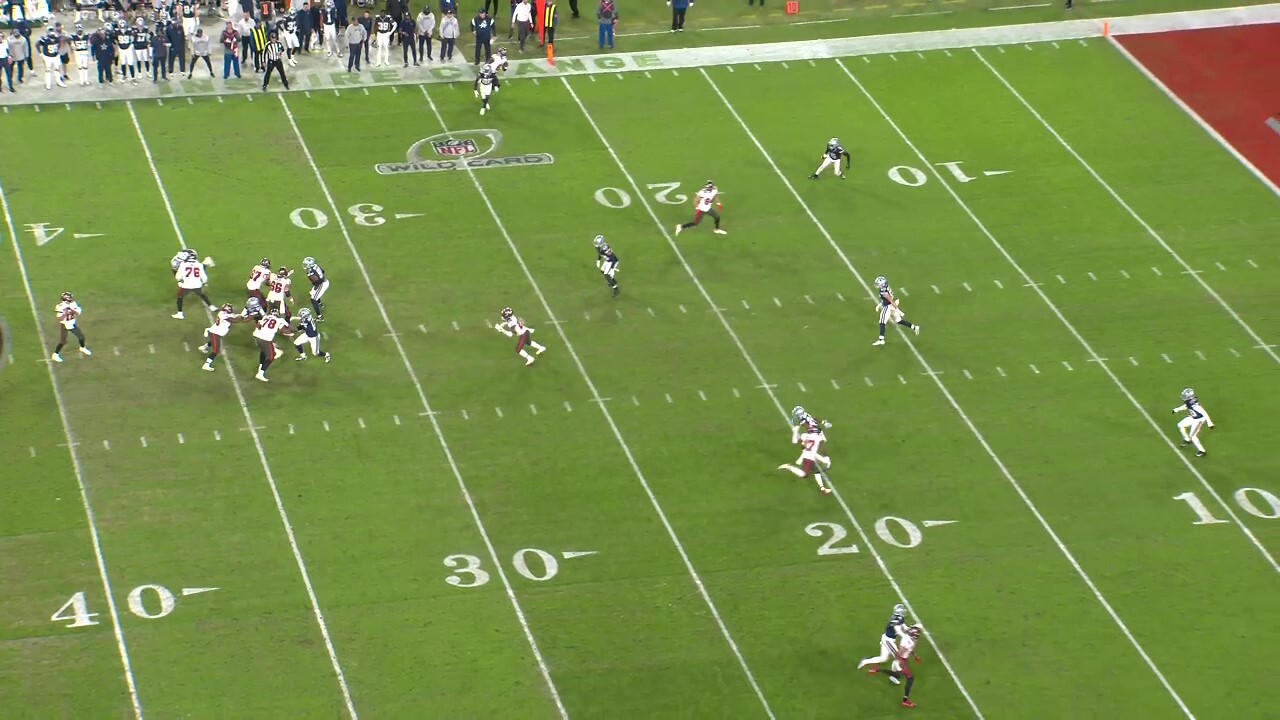 The main coverage in today’s NFL is Cover 3, which has been utilized at a 31.54 percent rate since 2020. This coverage was popular because it kept things in front of you and allowed you to have the extra man in the box. The Seattle Seahawks’ famous “Legion of Boom” dominated in this coverage and a lot of the NFL tried to replicate that scheme. Cover 3 has the outside corners drop back and cut the deep portion of the field into thirds. As a result, the middle of the field gets four players underneath, cutting this part of the field into fourths. The bottom players are usually moving from the inside out, and this is a combo where if the QB doesn’t recognize it, they can undercut these routes and create turnovers. This coverage has plenty of different looks, but that’s the basics for running the coverage.

Offensive Coordinators love running four verticals against Cover 3 because you get four players downfield against 3, and if you can make the safety bite one way or another, you can have someone running free. Having a clear-out route on the bottom with a deep crosser has also been a big play against this coverage if you can hold your quarterback upright.

A player that was lethal against this coverage was CeeDee Lamb. In Lamb’s five games with more than 100 yards receiving, only one team played less than 35 percent of Cover 3. Lamb ranked in the top 10 in target share against Cover 3, and with Dak Prescott at quarterback, he averaged over 2.7 yards per route run against it.

In the example below, presnap this play could be Cover 1 or Cover 3 for the Panthers, but once the linebackers bail and you see the eyes go to the quarterback and not the man they want to be guarding, you can tell it’s Cover 3. The eyes of Tom Brady do not get the safety to bite one way or another, and he puts the ball into contested coverage for Evans to make a play. 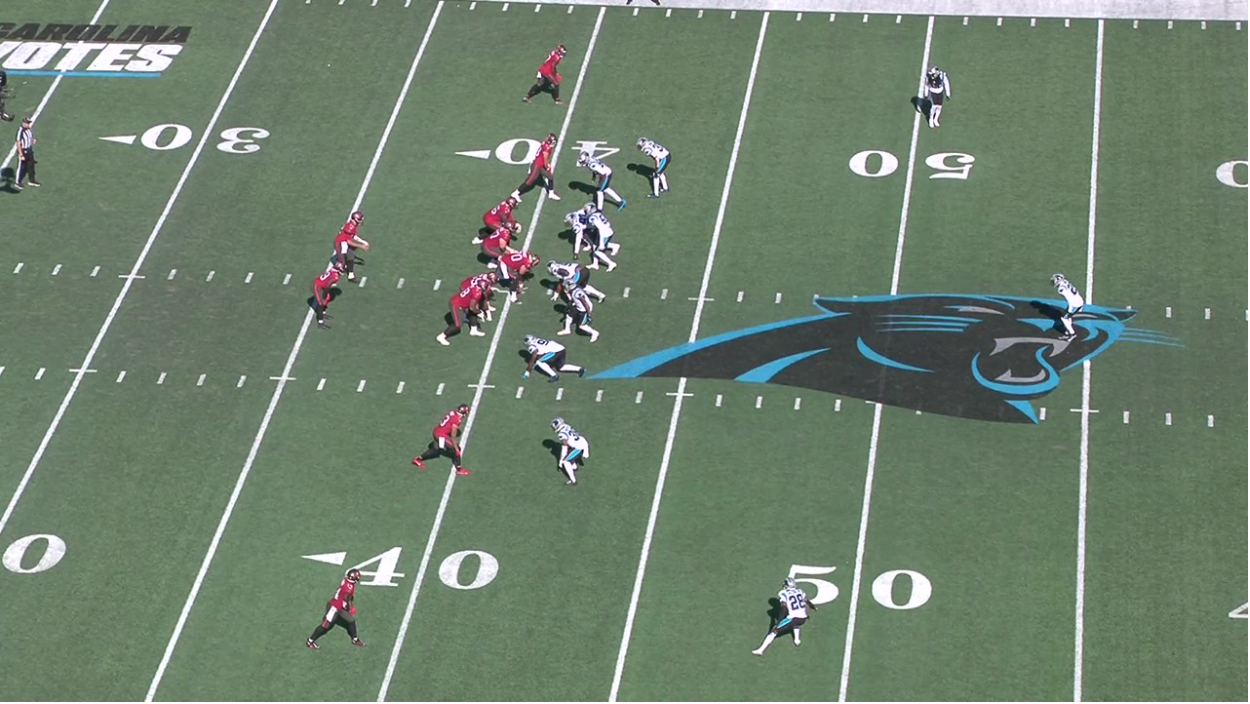 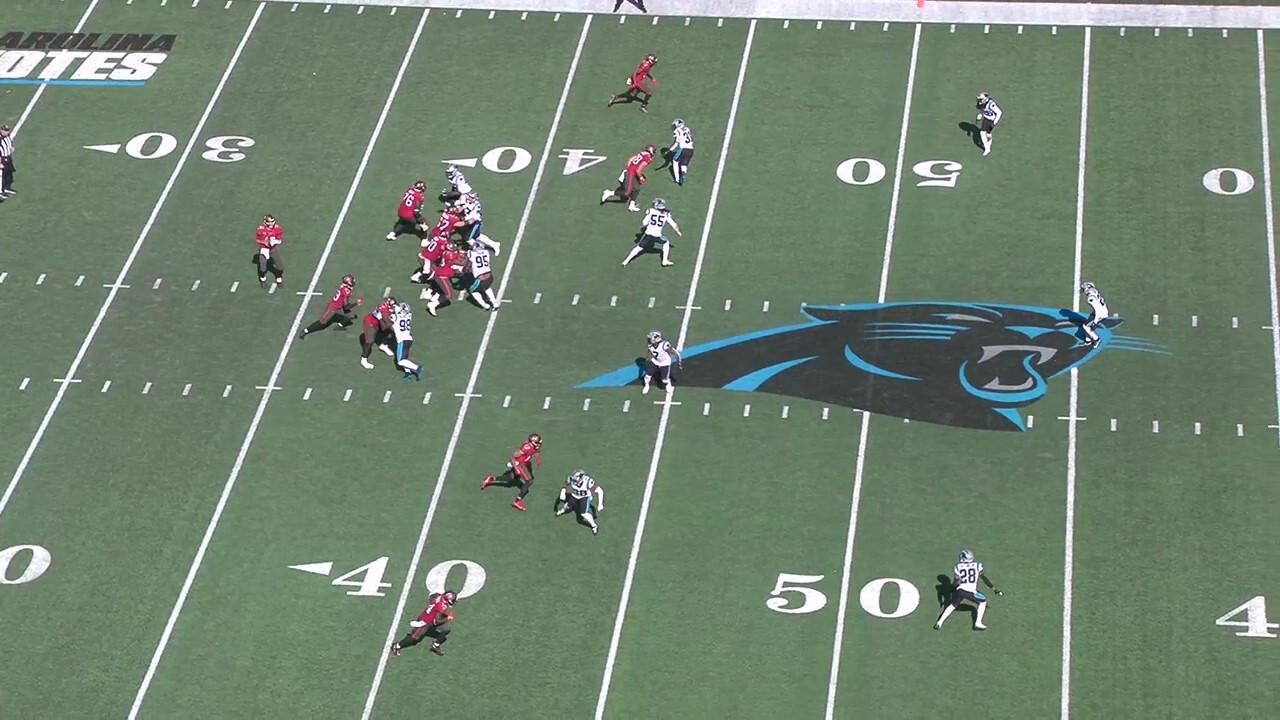 Generally referred to as “Umbrella” coverage, Cover 4 is a scheme that is becoming popular in today’s NFL, and it’s taking away the deep plays for the quarterbacks. Cover 4 has the field cut into thirds for the short area and quarters for the deep area. This coverage scheme can be a blessing with the right personnel and a curse when you miss important players. This coverage has been run at a 17.76 percent rate since 2020.

For the Jaguars, when they saw Cover 4, the ball would go to Zay Jones, and in the game against the Baltimore Ravens, where they saw plenty of it, Jones had 145 yards receiving. Certain teams will have players schemed up in certain looks, and for the Jaguars, they found a way to get Jones the ball against Cover 4.

Breaking quarters coverage requires you to win because you can create numbers underneath while they have four players back, but the defenders are playing these short routes with help behind them. Every zone coverage will eventually turn into a man situation. In Cover 4, the corner on the outside is essentially man-to-man on deep routes if you can occupy the safety with your slot player or tight end. The play below required a great double move by Marquez Valdes-Scantling and Mahomes magic to throw the ball deep. 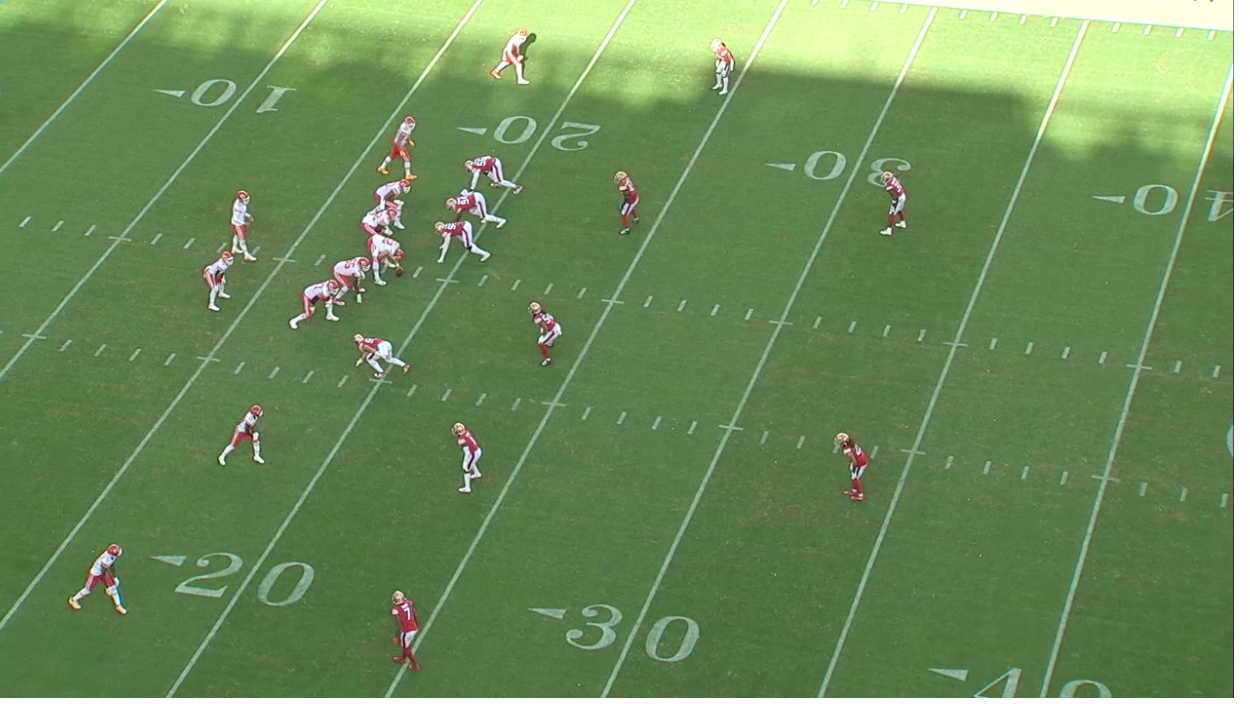 Many teams run this scheme very differently, and the three best examples are the 49ers, Eagles, and Vikings. The 49ers have elite linebackers, so the responsibilities of those players are much greater than those of the Eagles. The Eagles have great corners, so they are left on more of an island than the linebackers. The Vikings play this coverage with so much space between the linebackers and defensive backs that short area routes are easily effective against them. 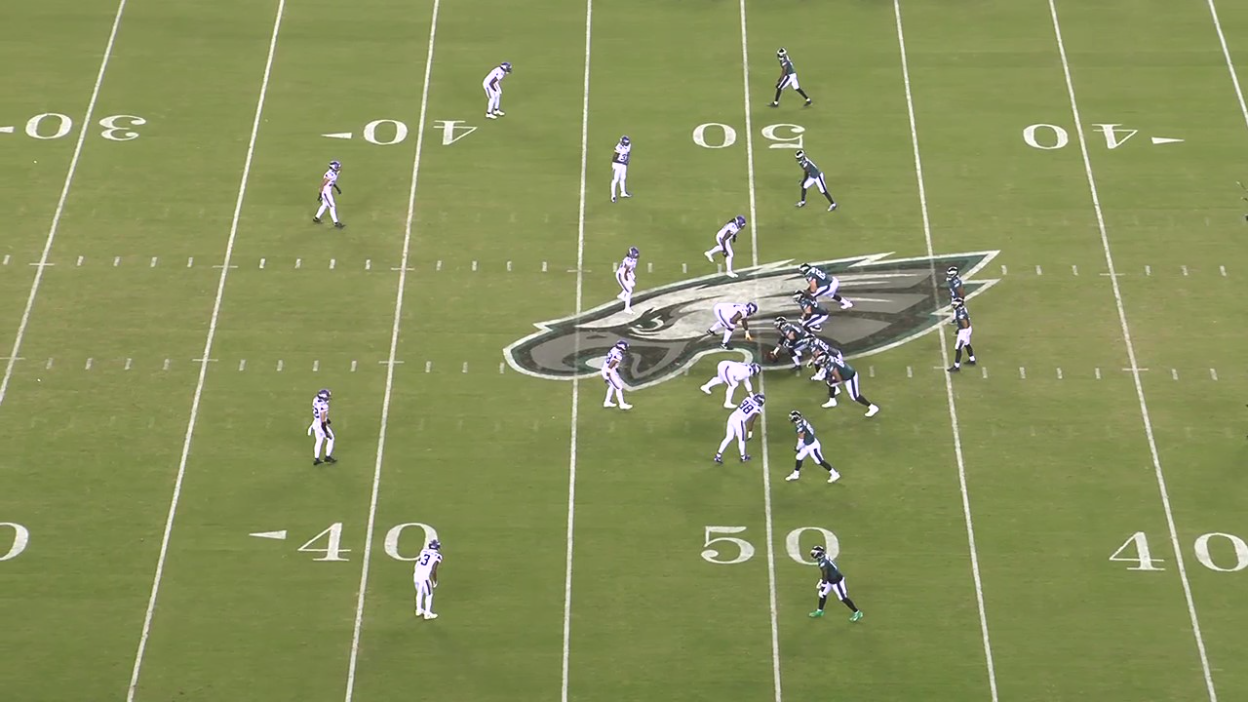 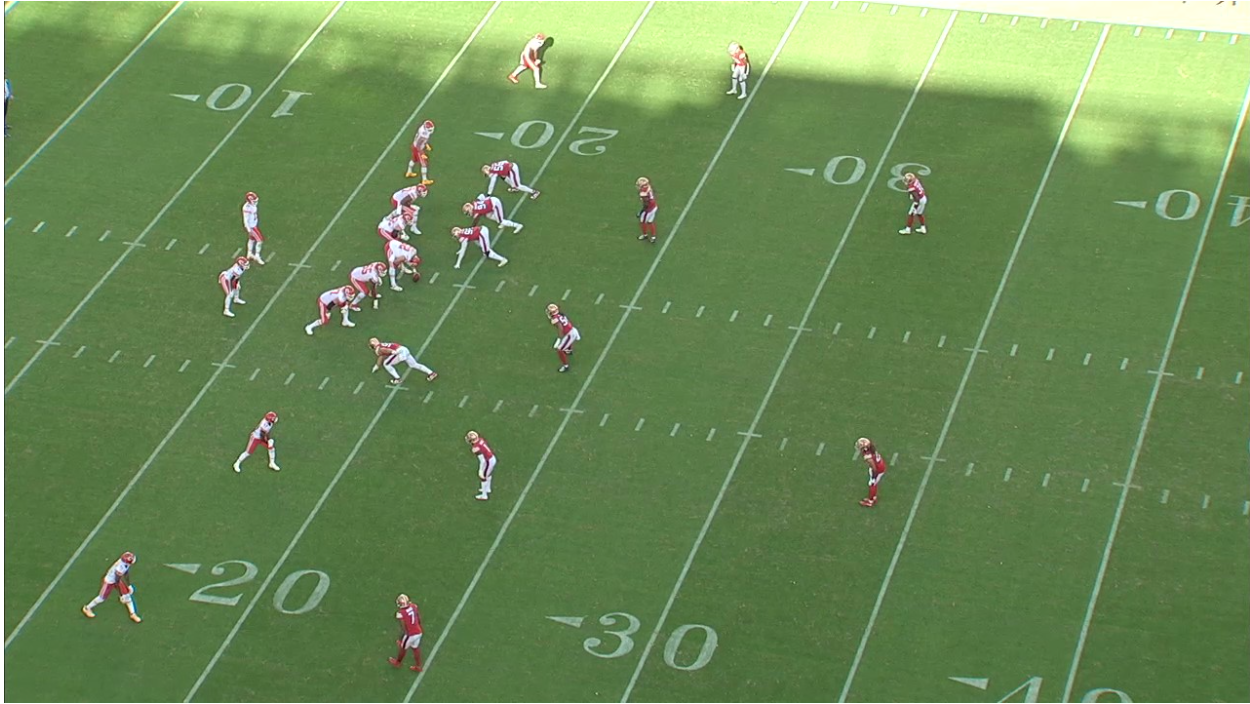 Coverage in the NFL changes frequently, but as the season gets played, there are trends to pay attention to and data to determine who will be used against specific looks. The great wide receivers can win against any coverage, but spotting the breakout game for a player can be drawn to the coverage we are seeing. The NFL is a game of trends, and the coverage we will see more of is a Cover 4 scheme, and with the correct personnel, it’s very difficult to beat.